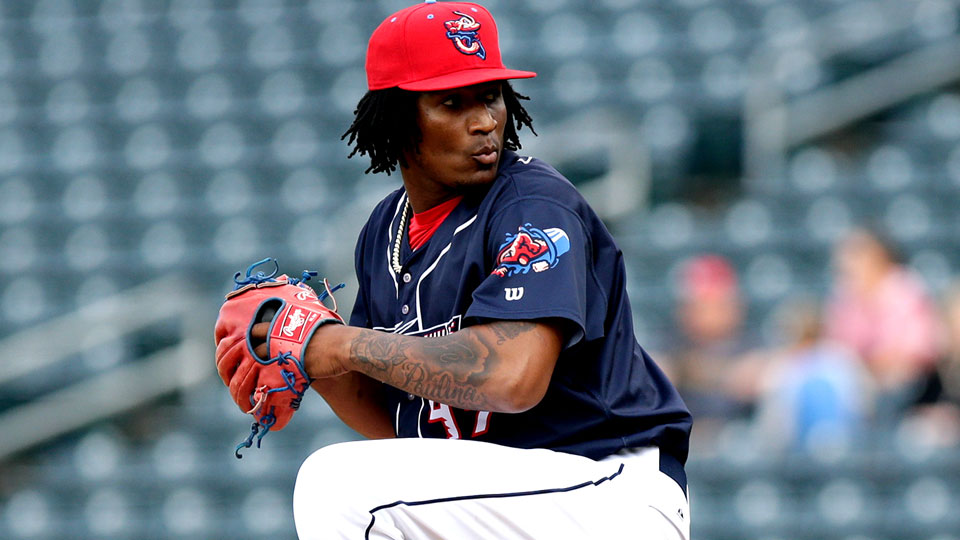 Sixto Sanchez threw 57 of a season-high 85 pitches for strikes while facing three over the minimum. (David Rosenblum)

Just hours after getting a promotion to the Southern League, Sixto Sanchez spun his best outing of the season.

Miami's top prospect yielded a hit and a walk while fanning seven over a season-high six scoreless innings, but Double-A Jacksonville fell to Biloxi, 2-1, in 10 frames at the Baseball Grounds of Jacksonville on Tuesday.

"[It was] a guy who was very confident on the mound," Jumbo Shrimp manager Kevin Randel said in a team interview after the game. "He really stuck to the fastball down and away -- really good carry to the ball down in the bottom of the zone. He was just electrifying out there. Slider was good, changeup was sharp ... it was a good outing."

Sanchez made two starts for Class A Advanced Jupiter this year, going 0-2 with a 4.91 ERA and a 1.45 WHIP with six strikeouts in 11 innings in the Florida State League. It marked the first two starts in the Marlins organization for MLB.com's No. 27 overall prospect, who came over from the Phillies in February's JT Realmuto deal.

The 20-year-old got right to work and threw 57 of a season-high 85 pitches for strikes while facing three over the minimum. Sanchez set down the first 10 Shuckers of the night before No. 30 Brewers prospect Trent Grisham lined a single to right field with one out in the fourth inning. Grisham was stranded at first when Sanchez whiffed 28th-ranked Jake Gatewood and Dillon Thomas to end the frame.

The Dominican Republic native gave up leadoff walks in the fifth and sixth -- including a 13-pitch pass to pitcher Devin Williams in the latter-- but worked out of trouble both times. With one out in the sixth, Grisham bounced into a fielder's choice before swiping second. But Sanchez got Gatewood to ground out to first to end the frame.

The outing marked Sanchez's sixth start of at least six scoreless innings as a professional and his first in the Miami organization.