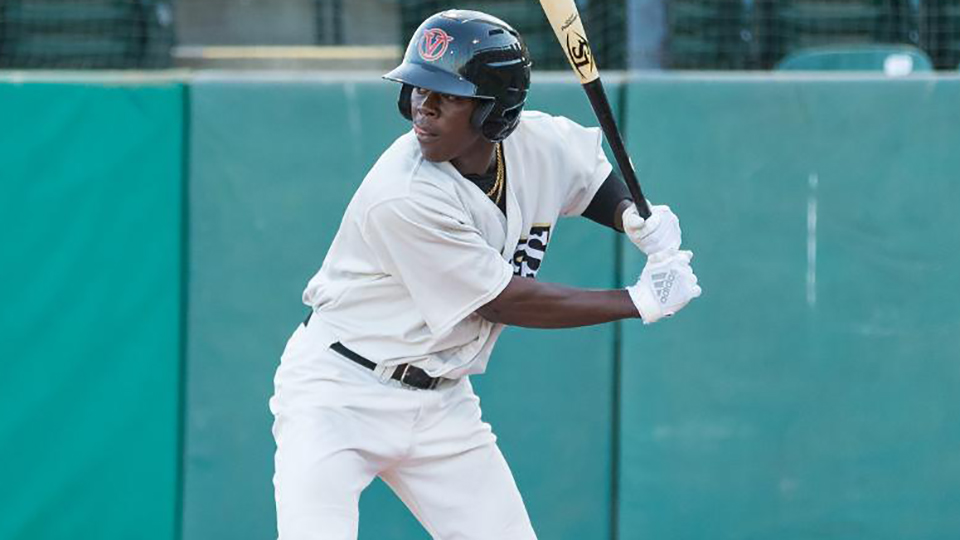 High drama: OK, so it wasn't quite David Bote's walk-off grand slam in the Cubs' 4-3 win over the Nationals at Wrigley Field, but Triple-A Nashville also produced some heroics Sunday. Third baseman Sheldon Neuse helped start an around-the-horn triple play to erase a Colorado Springs threat in the sixth inning, and the Sounds went on to win, 9-7, in 10 frames. That was the club's 13th straight victory. While Nashville still sits 10 games back of Memphis in the Pacific Coast League American Southern Division, the A's Triple-A affiliate is adding drama to what looked like a runaway race. More on the Sounds' big day in Michael Avallone's story here.

D-backs SS Jasrado Chisholm, Class A Advanced Visalia: 3-for-4, HR, 2B, 3 RBI, 3 R, K -- This was the No. 2 D-backs prospect's fourth straight multi-hit game. He went 9-for-18 (.500) with two homers, seven RBIs and five runs scored over that span to push his line to .349/.393/.639 in 20 games since joining Visalia on July 19. By going deep in back-to-back contests over the weekend, Chisholm now has 21 homers on the season, a clear sign that last season's offensive improvements before he tore his right meniscus were legitimate.

Yankees RHP Matt Sauer, Class A Short Season Staten Island: 6 1/3 IP, 4 H, 1 R, 1 ER, 1 BB, 7 K, 83 pitches, 57 strikes -- The Yankees' No. 10 prospect had allowed 16 earned runs on 28 hits over 15 1/3 combined innings in his last three starts before taking the mound at Connecticut. He proceeded to toss perhaps his best start of the season. Sauer's seven strikeouts and 6 2/3 innings pitched in a 3-2 Staten Island win each equaled season-bests. New York has taken the cautious route with their 2017 second-rounder, sending him to the New York-Penn League in his second summer, and that strategy has looked like the right one, given the inconsistent nature of Sauer's turn at SI. The 19-year-old right-hander, who throws in the low-to-mid-90s with an above-average curveball, tossed six no-hit innings in his season debut on June 15 but saw his ERA balloon to 4.44 before this gem. With only 12 walks in 53 innings, Sauer can fill up the zone but has notched only 41 strikeouts.

Nationals RHP Jefry Rodriguez, Triple-A Syracuse: 6 IP, 6 H, 1 R, 0 ER, 2 BB, 11 K, 99 pitches, 61 strikes -- The Nationals' No. 11 prospect was coming off his best Major League start on Aug. 7, when he allowed only earned run on three hits and a walk in five innings to earn his first big league win, so maybe a quality outing should have been expected in his return to the Chiefs. It's the 11 K's that moved this gem into unexpected territory. It was the first time in the 25-year-old right-hander's career that he reached double-digits in strikeouts. He hadn't struck out more than six in a start in any start since May 31, when he was at Double-A Harrisburg. Rodriguez, who averages about 95 mph on his fastball and relies heavily on his above-average curveball, now owns a 3.40 ERA with 102 strikeouts and 43 walks in 100 2/3 innings in the Minors this season, and despite his 5.84 ERA over 24 2/3 frames in the Majors, he has pitched well enough to deserve another shot.

Jesus Luzardo vs. Keon Broxton: When the A's promoted their top prospect to Nashville last week, the talk immediately turned to how quickly Luzardo could push his way to the Majors. The best way to test that? How about going up against a player with 677 career at-bats in the Majors and had been there as recently as last month? Luzardo got Broxton to strike out on a foul tip in the first inning but gave up a double to the Colorado Springs center fielder in the third. Those were their only two matchups of the afternoon with the Sounds southpaw exiting after just 3 1/3 innings, having given up four earned runs on six hits and two walks. That's a humbling experience for Luzardo, who tossed five scoreless innings in his Triple-A debut last Monday but now sports a 4.32 ERA through two outings. With his plus fastball and changeup and an above-average curve, he's still a potential candidate to join the Oakland bullpen down the stretch.

Mets 1B Peter Alonso, Triple-A Las Vegas: 2-for-3, HR, 2 RBI, R, K -- This category involves building the case for a promotion, not declaring that the player will make the move shortly. The Mets' No. 2 prospect has five homers in his last eight games. After flirting with the Mendoza line during his first month in the Pacific Coast League, Alonso is hitting .351/.422/.703 with six homers, eight doubles and 25 RBIs in 18 games since July 22. He now has 29 homers on the season between Vegas and Double-A Binghamton -- two behind Seuly Matias and Bobby Dalbec for the Minor League lead. The 2016 second-rounder won't be in Rule 5 danger this offseason, meaning the Mets won't be in a rush to call him up, but he looks increasingly ready for the challenge.