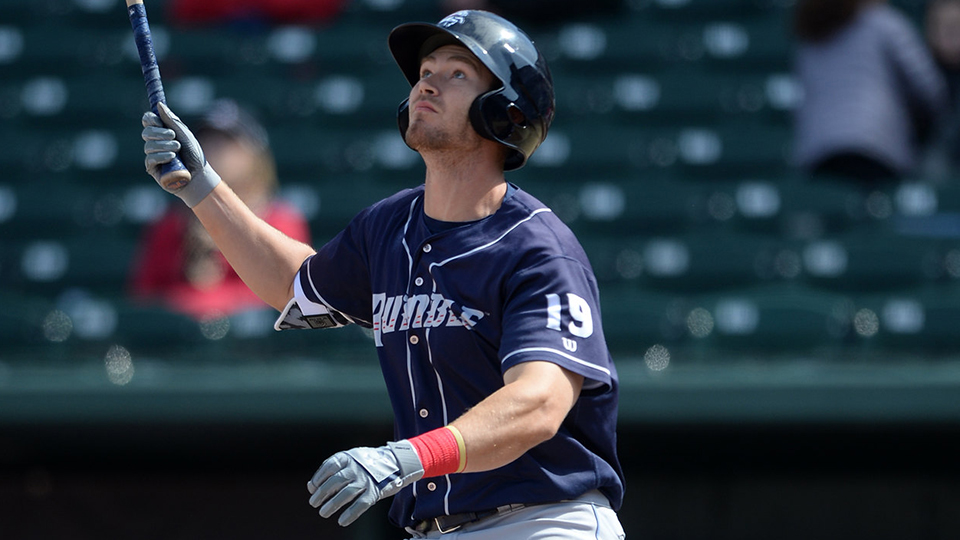 Patrick Mazeika doesn't think of himself as a first baseman yet. He was drafted as a catcher. He's on the Double-A Binghamton roster as a catcher. Even if he's made 17 of his 32 starts at first base this season, he still identifies as a catcher. The way he's been hitting of late, however, has been much more like a first baseman, generally the more productive of the two positions offensively.

Mazeika has been named Eastern League Player of the Week after going 9-for-27 with four home runs and four doubles over seven games last week for the Rumble Ponies. His 15 RBIs were the most among all Minor League hitters for the May 13-19 award period -- one more than Pacific Coast League winner Kevin Cron of Triple-A Reno. This is Mazeika's first Player of the Week honor over his five seasons in the Minor Leagues.

"I really just took advantage of a couple mistakes from pitchers," Mazeika said. "Earlier in the season, I was fouling off some pitches that I thought I could've done better against. But last week, I got a couple good swings together, and that's what's getting things rolling."

The biggest performance of the week for the No. 26 Mets prospect came last Wednesday when he went 3-for-4 with a homer, a double and a career-high six RBIs in a 9-8 loss to Altoona.

As flashy as his RBI totals ended up being -- 15 of his 27 RBIs on the season came last week alone -- the most promising development was in the power department. The left-handed hitter entered the week with only one homer over his first 25 games, and that came May 11, just two days before the start of his award-winning week. The 25-year-old hasn't reached double digits in homers in any of his first four seasons since getting drafted in the eighth round out of Stetson in 2015, and MLB.com graded his power at a 35 on the 20-80 scouting scale entering 2019.

"I feel like I'm more balanced at the plate and seeing the ball better as a result," said Mazeika, a career .288 hitter in the Minors. "I'm just being more relaxed up there right now -- not too big, not too anxious. ... Before I was focused too much on hitting the ball hard and maybe being a little too forward and pushing things a little too much. Now I'm being a little more natural and letting the power play naturally, instead of being early on pitches and trying to force things."

Mazeika's recent breakout is also notable, considering he's back in the Eastern League for a second season. After posting an OPS above .800 in each of his first three seasons, the Massachusetts native hit .231/.328/.363 with nine homers and a .691 OPS in 87 games with the Rumble Ponies in 2018. It served as a wake-up call.

"After struggling last year, it took a little while to accept that I wasn't going to hit right away," Mazeika said. "But I had to get in the mind-set that I could start 0-for-2 or 0-for-3, but that could turn into a 2-for-4 or a 2-for-5 quickly if you stay with it. The key was not getting frustrated."

Mazeika now owns a .266/.341/.476 slash line with five homers and 11 doubles in 32 games and may need to continue this recent upswing to continue his push forward in the upper Minors. The Mets told him during the last week of Spring Training that he'd be playing more first base in 2019, given No. 27 prospect Ali Sanchez -- who is a plus defender behind the plate with an even better arm -- would also be heading to Binghamton. More time at first base puts added importance on Mazeika's bat, but he's not ready to alter who he is fully just yet.

"I don't think it's changed my mind-set too much," he said. "I've still got to hit. I'm still a big part of the game over there at first. It's not a whole lot different, other than I don't have to communicate with the pitchers in between innings. ... Right now, I don't view myself as a first baseman quite yet. That said, I'm always trying to hit the ball hard, no matter where I'm playing. I'm not going to steal second base, so singles aren't valuable for me. I'm always looking to drive the ball anywhere I'm playing."

Below is the complete list of Minor League Offensive Players of the Week for May 13-19: