No. 1 Cards, Rays prospects facing off in South Bend on June 18 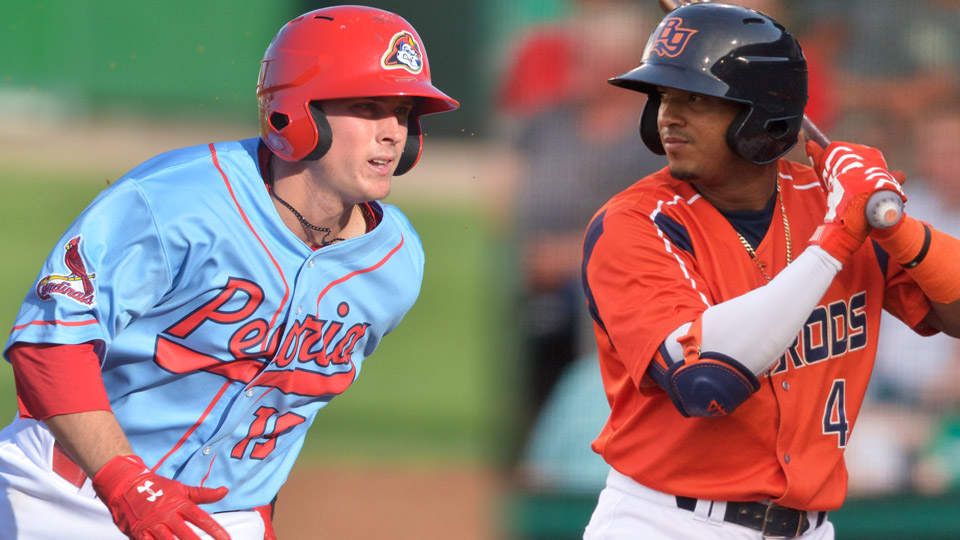 It'll be tough to find a larger collection of young talent at any point this summer than the one set to gather at South Bend's Four Winds Field in two weeks.

Top Cardinals prospect/Class A Peoria third baseman Nolan Gorman will lead the Western All-Stars against top Rays prospect/Bowling Green shortstop Wander Franco and the Eastern All-Stars in the Midwest League All-Star Game on Tuesday, June 18. First pitch is set for 7:35 p.m. ET. A total of 62 players from across the circuit comprise the two rosters announced Wednesday, and 19 of those prospects are ranked within the top 30 of their respective parent club.

Gorman sits fourth in the Midwest League with a .902 OPS, but the 19-year-old will hardly be the only one in the Western Division lineup with impressive numbers so early on in his career. Third-ranked Brewers prospect Brice Turang will start at shortstop, joining Gorman on the left side of the infield. Also just 19 years old, last year's 21st overall Draft pick is batting .318/.414/.410 for Wisconsin. A trio of 20-and-under D-backs prospects -- No. 7 Alek Thomas, No. 9 Blaze Alexander and No. 18 Buddy Kennedy -- will all represent Kane County.

Franco has a .326 average for the Hot Rods, a figure bested only by Eastern teammate Xavier Edwards. The 11th-ranked Padres prospect is batting .356 for Fort Wayne and earned the starting nod at second base. No. 3 Indians prospect Tyler Freeman, who's hitting .314 with 22 extra-base hits, and No. 25 prospect Will Benson, who leads the circuit with 16 homers, were also named to the Eastern roster from Lake County.

Cristopher Molina leads the league with a 1.49 ERA, and he and Burlington teammate/No. 13 Angels prospect Jose Soriano (4-5, 2.68 ERA) will be among those who could take the ball for the Western All-Stars. Current strikeout champ Chris Vallimont (3-4, 2.95), who's racked up 70 punchouts so far for Clinton, will also be among the 15 hurlers on the roster.

Rosters can be updated leading up to the game in the event of injuries or promotions.