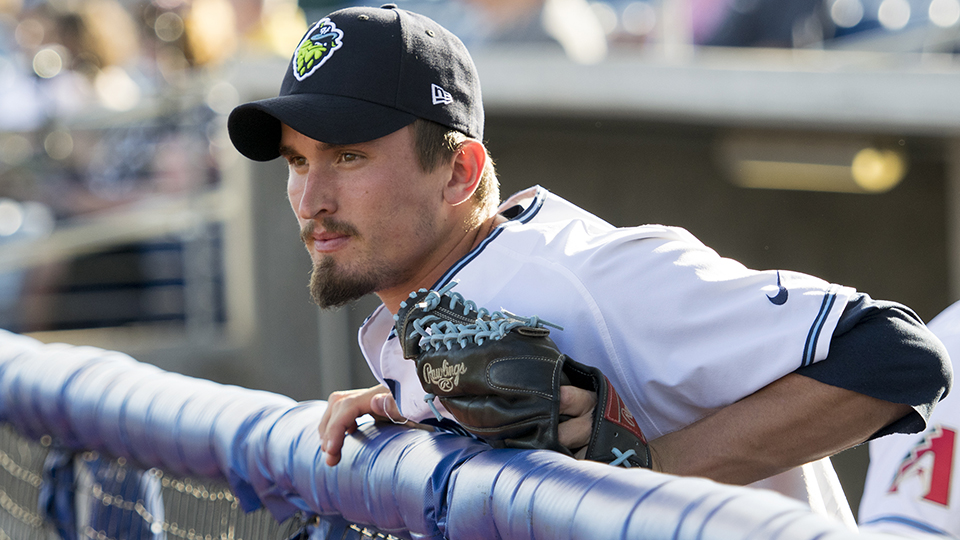 In the ninth round of the 2016 First-Year Player Draft, the D-backs unearthed a dynamic arm from the University of South Florida named Tommy Eveld. But it wasn't just on the mound where Eveld's arm had shined. A former quarterback for the Bulls, Eveld redshirted his freshman year of 2012 and was honored with USF's Scout Team Award for offense a year later. But in 2014, Eveld suffered torn knee ligaments and underwent the first of two surgeries, leading to an unlikely transition.

The Tampa native switched to baseball, debuting on the mound for the Bulls in 2015 and quickly establishing himself as one of the premier relievers in the college game. After not playing varsity baseball in high school -- and not playing at all following his sophomore year at the prep level -- Eveld adapted quickly. Following a 6.11 ERA in 13 appearances during his debut season, the right-hander put together a 2.21 mark in 26 outings a year ago.

The D-backs noticed and selected Eveld last June, sending him to Class A Short Season Hillsboro for his professional debut, and an impressive bow it was. Eveld pitched 29 innings over 24 appearances for the Hops, registering a 1.86 ERA while limiting opponents to a .168 batting average and striking out 31 against eight walks.

With an impressive four-pitch mix comprised of a mid-90s fastball, slider, curveball and changeup as well as experience in a relief role, Eveld could be the first of Arizona's 2016 Draft class to reach the Majors.

MiLB.com: When did you start considering a transition to baseball from football?

Tommy Eveld: I started thinking about it on accident. After I had my first knee surgery (on March 18, 2014), I wasn't able to go to summer camp that year with the football team, so I put together a slow-pitch softball team with some of my buddies. Me and my brother Bobby, who's currently throwing with the Blue Jays, we were throwing guys out at home plate from the warning track, and all our friends were like, 'Man, you guys should try baseball again.' So we went and joined a men's wood bat league and got on a team there. We were doing pretty well, so I went and tried out at USF right after the [2014] football season had ended and made the team two weeks before my first season in 2015.

MiLB.com: How did you handle such a quick switch to Division I baseball and committing full-time to the sport?

Eveld: I made the team in mid-January, and I think I threw in maybe three or four intrasquad scrimmages. During the second game of the season when we played Louisville, they were ranked No. 5, and that outing I think I threw four scoreless, no-hit innings. I didn't even really realize what happened because I was just out there throwing what the pitching coach called. I didn't really think too much of it.

We were stretching the next day and the head coach [Mark Kingston] pulled me aside and was like, "I'm not trying to make this decision for you, but you just threw four no-hit innings against one of the best teams in the country. You're yet to set foot on the field for the football team, so I think the decision is pretty clear what you need to do."

MiLB.com: When did you start realizing you might have a shot at playing professionally?

Eveld: Toward the end of that first season, I actually started to somewhat learn how to pitch and was understanding why they were calling pitches in situations. My velocity came back. I got up to like 92-93 [miles per hour] that first year, and I had scouts telling me, "If you can throw like this for a full season, you've got serious potential."

MiLB.com: What do you remember about being taken in the Draft?

Eveld: I had a couple friends over. We went fishing that morning and were kind of just hanging out on the lake, and then later in the afternoon when the later rounds started to roll in, I started getting phone calls in the fourth, fifth round, teams asking me signability questions. We sort of locked a deal in with the D-backs in the sixth round to take me in the ninth. When the ninth round rolled around, I went in, sat down inside and pulled the Draft up on the computer so I could watch it happen. I knew it was coming. It was still surprising. When they took me in the ninth round, I heard the computer say my name, '269th overall, ninth round pick for the Arizona Diamondbacks, Tommy Eveld.' It took a little bit to set in. It was a little bit surreal, kind of like a once-lost childhood dream coming true.

MiLB.com: How have you developed a repertoire and an identity on the mound in such a short span of time?

Eveld: When I first started getting into the game, I didn't really 100 percent know what I was doing, so I just went on YouTube and started to look up videos of Nolan Ryan and the way he pitched, his attitude on the mound, some of the stuff he was doing to prepare himself to throw, his offseason throwing program. It was actually Nolan Ryan and Tom House, they have a 30-minute video online that I sort of structure all my throwing around. The kids at USF used to call me Nolan just because I have an obsession with always trying to throw the ball hard. [USF pitching coach Billy] Mohl just kind of let me do my own thing because I have a reasoning behind it. He supported what I was doing rather than trying to change anything. He let me run with it, and it worked out.

I think where [my pitch mix] came from is my football background, being able to take a football and throw it from whatever arm slot, throw it around the offensive line, the defensive line, the linebackers, change arm slots to get the ball where I need it to go. I kind of took that naturally into baseball. Even today I don't really know what all my pitches are going to be. Every bullpen, I'll be tinkering around with something. If I can find the zone with it enough times, I'll think about throwing it in a game.

MiLB.com: How was your workload starting out in short-season ball?

Eveld: I like the way they have us throw in pro ball more than the way you throw in college. College, you've got your three weekend games and one midweek game. In pro ball, it's games every day, so you have to throw every day or be ready to throw every day. The Diamondbacks did a really good job of taking care of my arm and wouldn't let me throw in back-to-back games. I had to have at least one day off, so it wasn't ever too much of a workload to where I felt like I was throwing with a tired arm.

MiLB.com: How did you find the level of hitters you faced in the Northwest League?

Eveld: When I got there originally, I was afraid to throw the ball over the middle of the plate, worried that the hitters were going to be absolutely smashing the ball. Once I saw some of the other guys who threw before I did, went out there and did fine, I started to feel a little bit of confidence. I just went out there and did what I do. I really don't focus on the hitter. I really don't care who's in the box. I'm going to throw the same way I throw, the same mentality. I'm going to go after the hitter.