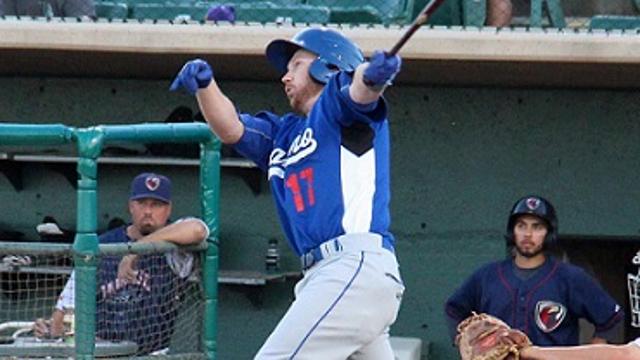 Kyle Garlick had never had more than one homer or three RBIs in a game before Monday. (Ron Cervenka/Thinkbluela.com)

Generally speaking, when you see there's a three-homer game in the California League, it's a safe bet that Lancaster is involved. Only this time, Kyle Garlick made sure that the JetHawks were on the receiving end.

Garlick's first long ball came early, a solo shot into left-center field in the second inning that cut the Quakes' deficit to 2-1. After singling home a run in the third, the 24-year-old outfielder collected his second home run of the game in usual fashion. With Matt Beaty on first and Mike Ahmed on third and two outs in the fifth, Garlick belted a line drive to center field that allowed him to race all the way around the bases for a three-run inside-the-park homer.

After lining out in the seventh, Garlick made the most of his last chance in the ninth, launching a solo homer over the Hanger's wall in left-centerto cap his night.

Garlick became the first Quake player since Jon Garcia on May 31, 2014 to homer three times in a single game. Like Monday's contest, the 2014 one happened in Lancaster as well. Counting Monday's feat, five of the last seven three-homer games to happen in the California League involved Lancaster, with three of them coming off the bats of JetHawks players.

A 28th-round pick a year ago by the Dodgers, Garlick entered Monday's contest having never gone deep twice as a pro. Three RBIs was his previous top mark in a game.

Garlick had been in the midst of a mini-slump, going 3-for-15 over his last four games for the Quakes.

Ahmed went 2-for-5 with a homer and two RBIs and two runs scored while Andrew Toles scored twice out of the leadoff spot.

Jose Fernandez smacked three hits, including a double, and scored twice for Lancaster.