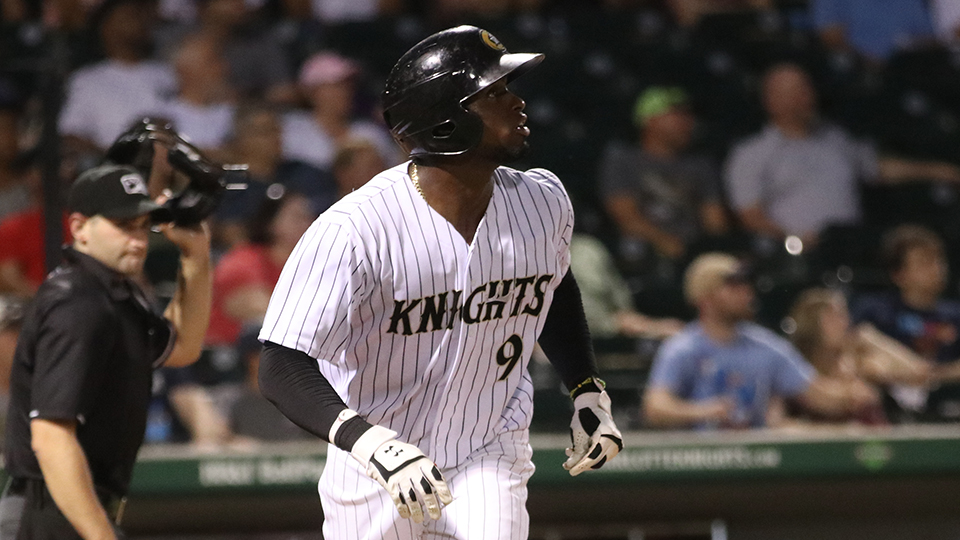 Luis Robert finished 2019 with a 1.001 OPS across three levels of the Minors. (Lance Carter/MiLB.com)

Three levels of the Minors did not present much of a challenge to Luis Robert in 2019. Two days into 2020, he's lined up a new test that begins on Opening Day in a Major League outfield.

The deal locks up Chicago's centerfielder of both the present and future and rewards Robert, 22, for going from a homerless, injury-plagued campaign in 2018 to being one of two Minor Leaguers to hit 30 dingers and steal 30 bases in 2019. He began the year with Class A Advanced Winston-Salem, posting a 1.432 OPS in a month with the Dash. He dominated 56 games in the Southern League, batting .314 with eight homers, 21 steals and an .880 OPS for Double-A Birmingham, then capped his breakout season with 16 homers in 47 International League contests for Triple-A Charlotte.

MLB.com's No. 3 overall prospect took home the MiLBY for Offensive Player of the Year for the numbers and moments that drove his rapid ascent through the White Sox system. Robert's coaches attributed his success to being more comfortable, confident and mature -- all of which came easier while fully healthy.

"I think [in 2018] the nicks and bruises and pain he was trying to play through at times was really affecting not only what he could physically be able to do, but the mental side of it as well," Dash manager Justin Jirschele said. "That freed him up big time this year and the confidence grew. And again, he's a year older, he's mature, he's more comfortable being around his teammates, being in the game, being in the ballparks -- I just think a little bit of everything about being a year older and being more comfortable, he was able to put it all together."

Robert, who signed for $26 million out of Cuba in May of 2017, is the fifth player to receive a long-term extension prior to making his Major League debut. Former Astro Jon Singleton was the first (2014), the Phillies followed with Scott Kingery (2018), the White Sox also inked Eloy Jimenez to a similar deal last year, and Seattle's Evan White joined that group earlier this offseason.