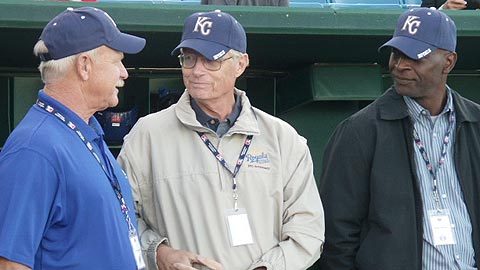 OMAHA, Neb. -- A lazy fly ball off the bat of Round Rock's Brandon Barnes settled into the glove of Omaha center fielder Jarrod Dyson, sealing a 6-2 victory for the hometown Royals.

But Dyson's routine putout didn't just end Thursday's ballgame, it was the final play in Rosenblatt Stadium's 62-year history as a professional baseball stadium. The sprawling 23,500-seat facility has served as Kansas City's Triple-A affiliate since the franchise's 1969 inception, and it has hosted the College World Series for the past six decades.

Both of these longstanding relationships will continue unabated in 2011, with the O-Royals relocating to nearby Sarpy County and the College World Series setting up shop in a new downtown facility. Clearly, the national pastime is still thriving in Omaha, but that didn't make Thursday's finale any less bittersweet.

The community came out in force for what turned out to be the O-Royals' 1,601st victory at the stadium. The announced crowd was 23,795, many of whom turned out well in advance of the game's 7:05 p.m. first pitch as the first 2,000 received a mini-replica Rosenblatt seat.

Given a final opportunity to do so, the throngs cheered vociferously throughout the evening for their hometown team. There was plenty to cheer for, as the O-Royals took a 2-1 lead in the first inning on the strength of Mike Moustakas' home run and never looked back.

Moustakas, the 21-year-old third baseman who leads the Minor Leagues with 36 home runs, may very well be one in a long line of Omaha players to go on to Kansas City stardom. Several of his predecessors in this category were in attendance Thursday, such as second baseman Frank White, outfielder Willie Wilson and pitchers Dennis Leonard and Paul Splittorff.

"It's a sad occasion, but also a good occasion," said Wilson, who suited up for Omaha in 1977. "It's sad because all of this history is going to be taken away, but good because this is progress. A new generation needs comfort and to play in an up-to-date facility. ... And for me, there's just a lot of memories here.

"The first time I started switch-hitting was here, and I remember my first inside-the-park home run and my first hit," he added. "I know that I damaged a few fans in the stands with my switch-hitting."

"Coming through here gave me a chance to see what Triple-A baseball was all about," said White, a member of the 1973 squad who played in Kansas City until 1990. "You get to experience a lot of things here, and that's what I learned, how diverse it is playing Triple-A."

"Coming here from Rookie ball, Omaha looked as good as the majors. And I'm from the area, so playing here was really important," he said. "We had some good teams, and I had as much fun here as I did in the big league. It was awesome."

Decades later, Splittorff was able to watch his son, Jamie, pitch at Rosenblatt during the 1993 College World Series. He remarked on how special this was, since it was the only ballpark that he and his son both competed in.

And that was one of Rosenblatt's primary appeals, in that its longevity united the generations. This point was illustrated in dramatic fashion at the end of the evening, when septuagenarian Steve Rosenblatt stepped into the batter's box to deliver one last hit.

Steve, the son of stadium namesake (and former Omaha mayor) Johnny Rosenblatt, told the crowd that "If I hit one that I think Johnny Rosenblatt would be proud of, I'll give the thumbs-up and we'll start the fireworks."

After laying down several bunts and scattering a few balls around the infield to growing applause, Steve hit a sharp grounder past third base. He smiled, gave the thumbs-up and the lights went out at Rosenblatt Stadium for the very last time.