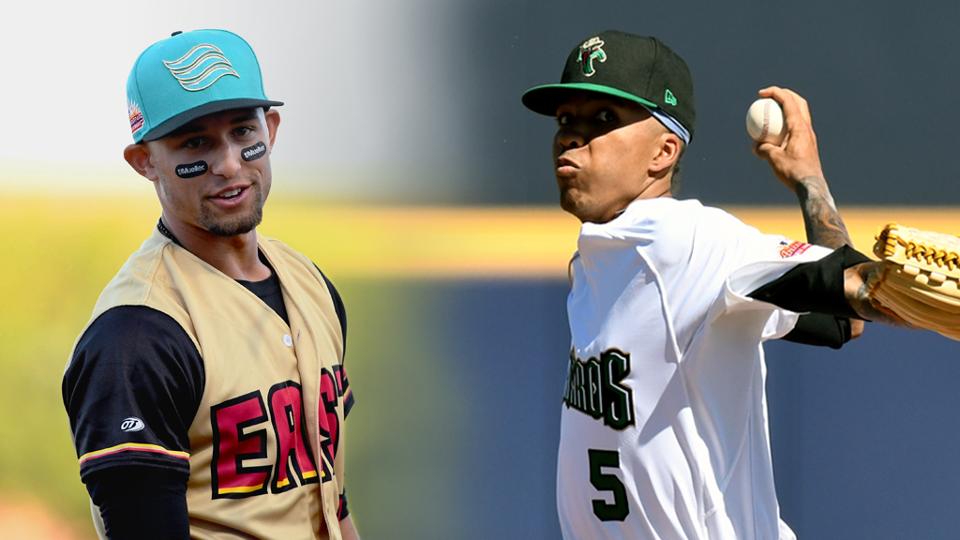 Royce Lewis and Sterling Sharp were each strong in a short week in the Fall League. (Jennifer Stewart, Buck Davidson)

Royce Lewis already captured one award last week when he was named Fall Stars Game MVP on Saturday. He added another one Wednesday afternoon.

The Twins' top prospect was named Arizona Fall League Player of the Week for Week 4, the league announced Wednesday. Nationals No. 13 prospect Sterling Sharp won the AFL's Pitcher of the Week award for the period of Oct. 7-13.

Lewis played only three games for Salt River during the short week caused by the Fall Stars Game but made them count. He went 6-for-10 with two doubles, three RBIs, three walks and one strikeout over 13 plate appearances. His biggest performance came Thursday at Mesa when he tied his AFL high with three hits (including a double) in the Rafters' 9-3 loss.

MLB.com's No. 9 overall prospect started at three different positions in his three games -- third base, center and second base, none of which are his natural shortstop position. Lewis hasn't played shortstop at all in the AFL, in fact, as he works on his versatility, though the Twins still have long-term plans to keep him at the six.

Despite all the movement on defense, Lewis has dominated offensively through the first month of the Fall League. His .371 average though 16 games is second-best among AFL qualifiers while his 1.058 OPS is tied for third. He's homered three times and added seven doubles as well. The 2017 top overall pick hit .236/.290/.371 with 12 long balls in 127 games between Class A Advanced Fort Myers and Double-A Pensacola during the regular season.

Sharp lived up to his surname with a strong start for Surprise last Tuesday. The 24-year-old right-hander fanned three and scattered two hits and two walks over five scoreless innings against Mesa. He has since followed with five more zero-laden frames, during which he struck out five while allowing one hit and three free passes on Monday.

The Washington righty is second in the AFL with 19 innings pitched in total, posting a 1.42 ERA and 1.00 WHIP with 17 strikeouts and nine walks. Sharp, who specializes in inducing ground balls, had a 3.99 ERA with 45 K's in 49 2/3 innings with Double-A Harrisburg during the regular season and was sent to the AFL to make up innings lost to an oblique injury suffered in late May.