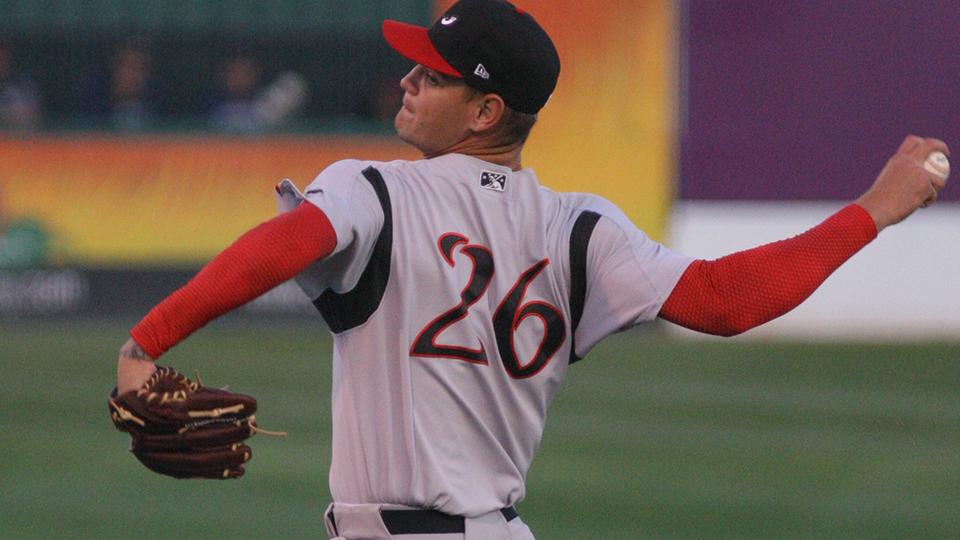 Michel Baez was 7-2 with a 2.54 ERA last season at two levels, striking out 89 and walking just 10. (Shelly Valenzuela/San Jose Giants)

Michel Baez sure has a thing for splashy first impressions.

The 6-foot-8 right-hander blanked Lake County on two hits with nine whiffs in five innings in his full-season debut last July 4. Making his first Class A Advanced start Monday, he topped that.

Baez, who signed with San Diego in December 2016 for $3 million and started the year in extended spring camp because of lower back soreness, pitched five hitless innings as Lake Elsinore fell to San Jose, 2-0, at Municipal Stadium. He allowed an unearned run, walked two and struck out two.

The damage against the No. 42 overall prospect -- who walked eight batters in 58 2/3 innings in the Midwest League in 2017 -- was in part due to an uncharacteristic bout of wildness in the second inning. He walked Gio Brusa to start the frame and Sandro Fabian reached on a missed catch error by second baseman Eguy Rosario. The 22-year-old native of Cuba threw a wild pitch to Matt Winn, moving both runners into scoring position, but ultimately walked Winn. The Giants capitalized, pushing home a run on a groundout by Frandy De La Rosa.

Storm pitching coach Pete Zamora said Baez's lack of command wasn't surprising or concerning. He was behind on 12 of the 19 hitters he faced.

"He was a little hyped, since he spent that time in extended and finally got here," Zamora said. "Just hyped. Nothing we're worried about. Just his first start up [in the California League]."

Beginning with De La Rosa, Baez retired 11 in a row, taking him through the fifth on 82 pitches -- 46 strikes.

Baez's dominance is a result of his size, velocity and perhaps an unquantifiable trait, said Zamora, who added the 22-year-old touched 97 mph.

As an amateur, he walked more batters (16) than he struck out (14) in his one season of playing in Cuba's top league, Serie Nacional. The Padres outbid the Cardinals and Astros for him and had then-pitching coordinator Mark Prior work with him to hone his control. Baez's fastball can touch 99 mph, and he throws an above-average slider and a changeup.

Baez dominated at Class A last season, but Zamora knows there's much work to do.

"The Padres breathe fastballs and fastball command," Zamora said. "[Baez] was getting a lot of chases in the Midwest League, but he'll need more command as he moves higher in the levels. He's a smart guy, he's got good aptitude."

Zamora, who spent some time with Baez in the Rookie-level Arizona League last season, said the tall righty needs to learn to sequence better.

"He becomes predictable in that he uses [the fastball] a lot," said Zamora, noting Baez tends to throw the heater 80 percent of the time. "He needs better shape with the breaking ball, and [while] the changeup is going to be a plus pitch, he needs to keep working on it."

San Diego's No. 19 prospect Edward Olivares doubled and singled, while Luis Torrens, who spent 2017 in the Majors after being selected from the Yankees in the Rule 5 Draft, singled twice.

The Giants added a run in the eighth on a sacrifice fly by Jalen Miller. San Jose had three hits total, all singles, with one coming from Fabian, the sixth-ranked San Francisco prospect.

But Monday was about Baez, despite the loss. He is a top prospect in a deep system who burns to improve.

"He's a bright kid and though he doesn't speak English well, he understand baseball English," Zamora said. "He wants to get better."