No. 49 overall prospect fanned 16 over 11 innings for Arkansas 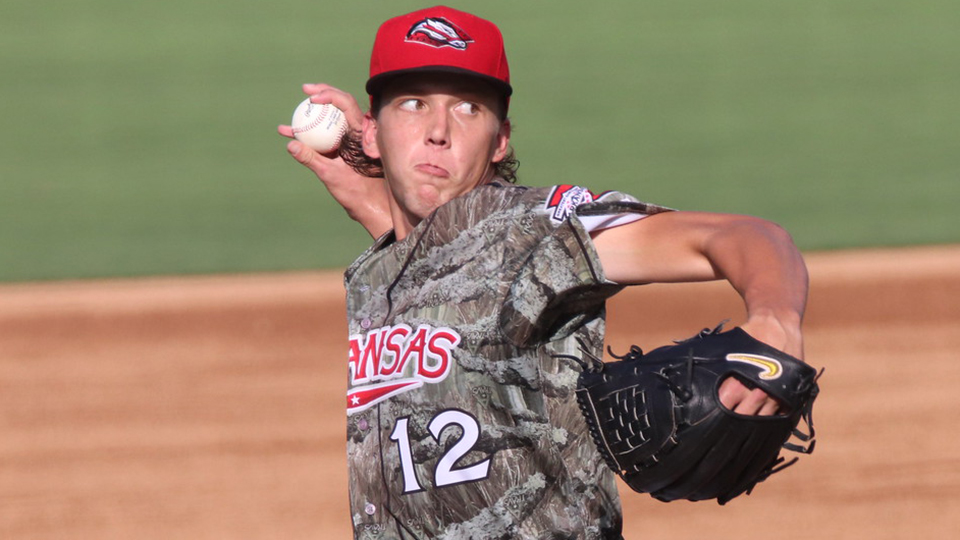 Logan Gilbert hasn't hit many bumps during his rapid ascent through the Mariners system. But he has picked up a few accolades along the way, including another Monday.

The Mariners' No. 3 prospect has been named the Texas League Pitcher of the Week for Aug. 12-18 after striking out 16 and scattering six hits and four walks over 11 innings in a pair of starts for Double-A Arkansas. This is his second Pitcher of the Week award of the season after he was also honored in the California League on May 20.

Taken with the 14th overall pick in the 2018 Draft, Gilbert owns a 1.95 ERA and 0.93 WHIP over 124 1/3 innings spread between Class A West Virginia, Class A Advanced Modesto and Arkansas in his first full campaign. His 154 strikeouts are tied for seventh-most in the Minors alongside Yankees right-hander Deivi Garcia and Astros righty Cristian Javier, while his 32.1 percent K rate places ninth among the 340 Minor Leaguers with at least 100 innings pitched in 2019.

Despite a hectic summer, the Stetson University product has remained even-keeled throughout his first extended look at the pros.

"I'm just trying to do the same thing every time I'm out there," Gilbert said. "There are a lot of differences with hitters and some different philosophies the higher I go. There might be some better takes. They might adjust to what I'm doing a little quicker. But from my end, I've got the same stuff I'm working on every start, and it comes to down to really having to execute on my end, instead of focusing on what they're doing."

The 6-foot-6 right-hander certainly ticked that box last week in each of his outings for the Travelers. Gilbert took the mound Tuesday at home against Northwest Arkansas and shut down the Naturals, fanning eight and giving up four hits and one walk over six scoreless innings. His second dominant outing of the week came Sunday at Springfield -- another eight-K start in which he surrendered two hits and three walks over five frames. It was the third time in Gilbert's last four starts that he faced the Cardinals. Gilbert hasn't allowed more than two earned runs in any of his last five outings, going 4-1 with a 1.24 ERA and 33 strikeouts in 29 innings over that span.

The Florida native has stood out for mid-to-high-90s velocity, but he credits the recent development of another offering for his takeoff with Arkansas.

"We've been working in bullpens on the slider -- the shape and the spin direction of it -- and getting it to play off the fastball," he said. "The main thing, I'd say, is the spin direction because that's something that's really resonated with me. I'm trying to get a 9 o'clock spin on it, something that the hitter can't quite pick up. It matches the tunnel of the fastball, and using it with my curveball, it's a good thing to have two good breaking balls here."

The right-hander also has been able to trust his changeup, which he says he tries to throw with a 2 o'clock spin -- rounding out an arsenal that gives him an impressive ceiling as a starting pitcher.

"Honestly, I didn't have a lot of experience with looking at the game this way before," he said. "It's been pretty eye-opening. There are obviously lots of different ways to look at pitches, but spin direction just gives me a simple number to think about. It's so much easier to picture the ball spinning that certain way, and it gives me an easier target to chase. The work goes toward finding a way to get the pitch where I want it, but it's easier to see in my head first this way."

Gilbert's ascension and dominance at Double-A has rounded out what was already an impressive Travelers roster. Arkansas boasts seven of the Mariners' top 10 prospects, including fellow Top-100 talents Jarred Kelenic, Evan White and Justin Dunn. Seattle's Double-A affiliate already clinched a Texas League playoff spot with a first-half North Division title, but it enters Monday tied with Tulsa for the second-half crown as well. A Texas League title isn't hard for the Travs to envision, but as Gilbert notes, they have their eyes on more.

"We're trying to build something from this," Gilbert said. "You look around, and there's a lot of talent the Mariners have put together here. Now, it's on us to get together, win a championship in Double-A and see what we can do together. This is a good chance to prove what we're all capable of as a group."

Below is the complete list of Minor League Pitchers of the Week for Aug. 12-18: