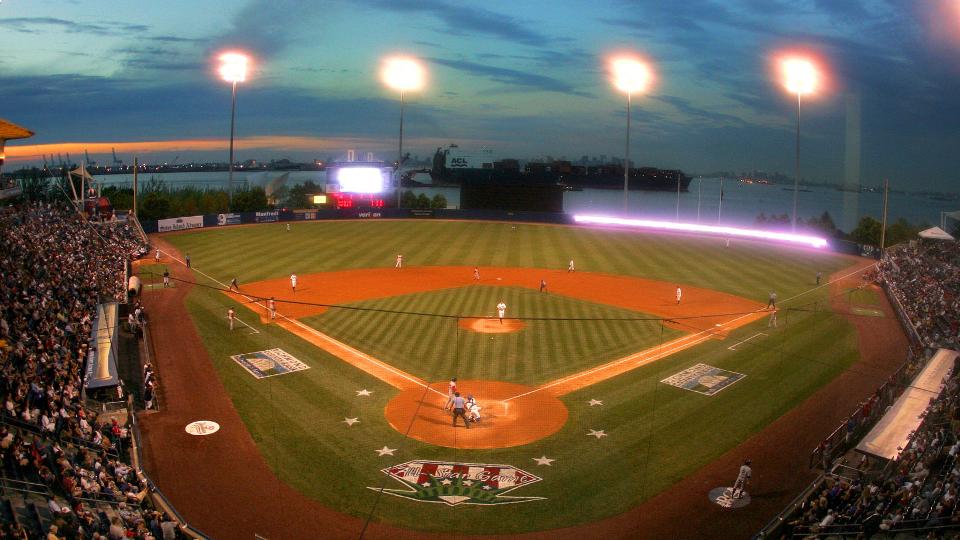 Richmond County Bank Ballpark has been home to the Staten Island Yankees since the 2001 season. (Danny Wild/MiLB.com)

The Yankees name is emphatically "New York," but it is not emphatically "Staten Island." The Staten Island Yankees, in search of just such a moniker, have announced the five finalists in their "Name the Team" contest.

"We are venturing into creative, uncharted territory to create a hometown identity that embodies the kind of fun that Minor League Baseball is known for," said the team in a press release.

As is typical of such endeavors, the finalists run the gamut from the silly to the serious to the surreal. They are, in alphabetical order: Bridge Trolls, Heroes, Killer Bees, Pizza Rats and Rock Pigeons. The team is asking fans to submit their feedback over the next two weeks.

"I think all teams should have their own brand," said Staten Island Yankees president Will Smith, citing the long-running success of the rival Brooklyn Cyclones as a prominent local example. "This is a tremendous opportunity at this stage in the team's history, to come up with something meaningful, to have an impactful brand in a Minor League landscape full of impactful brands…. We want to grab headlines and have this name be the basis for a tremendous brand that could become world famous."

Being located within one of the world's biggest markets is both a blessing and a curse for the franchise. They have the opportunity to draw from a much larger base of potential supporters, but also must find ways to differentiate themselves within a supremely crowded sports and entertainment landscape. Smith said that while the Yankees name elicits and "prideful and passionate" response, it doesn't speak specifically to Staten Island or the Minor League experience offered at Richmond County Bank Ballpark.

"Every single name [among the finalists] is a name, or a part of a name, submitted by our fans," said Smith. "'Bridge Trolls' wasn't submitted, but 'Bridges' was, and that's a tip of the cap to the four bridges that lead to and from Staten Island…. And like it or not, rats and pigeons are all over the city. I love animals, there are a lot of things you can do with them when it comes to areas of the ballpark and branding. We would never come up with a brand featuring something like a slimy rat. It would be something that, hopefully, people can understand and embrace.

"'Heroes is an obvious one," he continued. "So many people in Staten Island are civil servants, working for the government and serving the public, working for the NYFD and NYPD. And there are other creative things we could do with that word, if you look between the lines."

"Killer Bees" is an homage to the Wu-Tang Clan, as "Killa Beez" is the name given to the myriad artists and groups affiliated with the long-running Staten Island-based hip-hop collective. Smith said there's "no doubting the influence" of the group and that "it's something a lot of people are proud of."

Regardless of the new name, Staten Island will remain the Class A Short Season affiliate of the New York Yankees. The New York-Penn League franchise played its inaugural season in 1999 and, two years later, moved into its current home of Richmond County Bank Ballpark. Located adjacent to the Staten Island Ferry terminal and offering skyline views of lower Manhattan, the ballpark is well-situated to draw fans not just from Staten Island but from throughout the five boroughs. The area surrounding it is undergoing rapid transformation as a result of the sprawling "Destination St. George" development project, highlighted by the current construction of the 630-foot "New York Wheel." Scheduled for completion by the end of 2017, the New York Wheel is expected to assume the distinction of being the world's tallest Ferris wheel.

"Now is the time," said Smith. "I'm excited about trying to create something that people in Staten Island can rally behind and support and love and respect and admire."