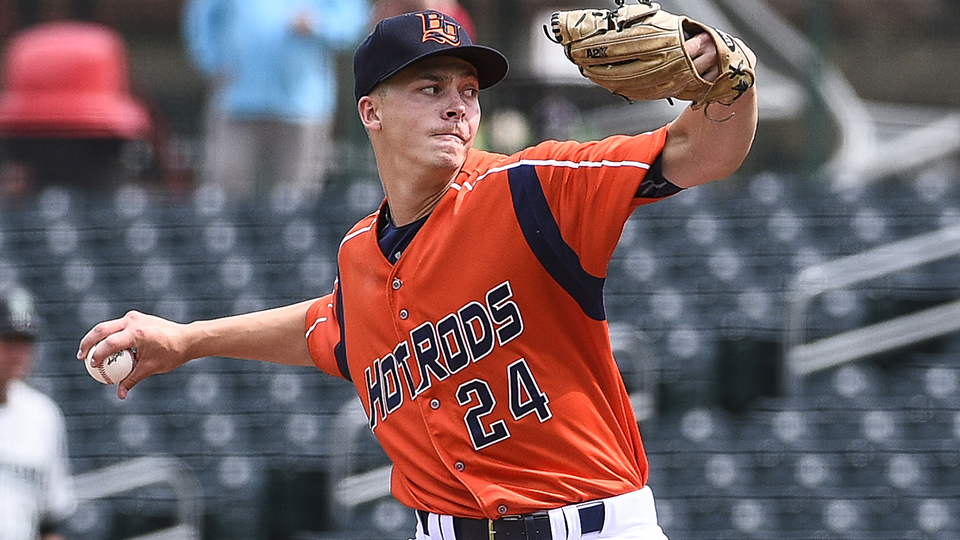 Caleb Sampen turned in the most impressive start of his young career on Friday night.

The Rays prospect limited Class A Peoria to one hit and struck out eight over a career-high seven scoreless innings before Bowling Green dropped a 2-1 decision at Dozer Park.

Acquired from the Dodgers in January for right-hander Jaime Schultz, Sampen yielded only a two-out single to Brady Whalen in the first. The right-hander retired the final 19 batters he faced, registering two punchouts apiece in the second, third and fourth innings.

"In some of my past starts, I relied on certain pitches too much," said Sampen, who threw 53 of 75 pitches for strikes. "Tonight, I used all my pitches. It's a lefty-heavy lineup, so I used my changeup more and against right-handers worked in my cutter. I wanted to give them different looks the second and third time through the lineup."

The two-out hit in the first "knocks the no-hitter out of your mind and you just look to execute pitches," Sampen said. "I just wanted to keep the team close. You just go into pitch mode -- execute and give different looks. ... The game was flying by and when we scored, because there was not a lot of offense in the game, it felt like we were up, 3-0, but we knew one run doesn't win a ballgame very often."

Selected by the Dodgers in the 20th round of last year's Draft out of Wright State, the 22-year-old right-hander is the son of former Major League hurler Bill Sampen. Last year with Rookie Advanced Ogden, Sampen had a three-inning start in which he did not allow a hit and four times pitched three scoreless frames. Against Peoria, he came within one of the career high in strikeouts he established his last time out on April 25 against Lansing.

"At Great Lakes [on April 19], I had six walks. That's something I've always prided myself on -- not walking hitters, making them earn it. I knew I had to elminate the walks," said Sampen, who had only four three-ball counts against Peoria, with six of his eight whiffs coming after he threw a first-pitch strike.

"Tonight wasn't as much a change in game plan as it was execution. In those three innings with two strikeouts, I got ahead in the count. That frees you up to throw more pitcher's pitches and stay out of hitter's counts."

The game was scoreless until Bowling Green's Jake Palomaki grounded a one-out single in the eighth to plate Chris Betts.

The Chiefs answered in the bottom of the inning against left-handed reliever Nick Sprengel (0-1). Brandon Riley singled home 23rd-ranked Cardinals prospect Wadye Ynfante, who doubled with one out, and Alexis Wilson scored the go-ahead run on a fielder's choice by Edwin Figuera.

Peoria starter Diego Cordero matched Sampen for 6 2/3 innings, giving up four hits and striking out four. Evan Sisk (1-0) got the win, working around a hit and fanning one in 1 1/3 frames.

Connor Hollis doubled twice for Bowling Green and was the only player on either team with more than one hit.