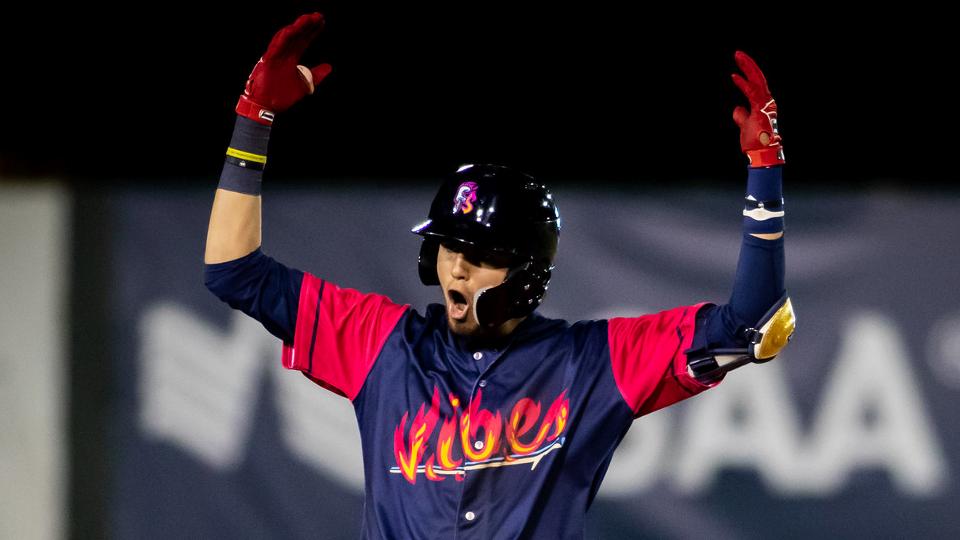 A move from Triple-A to the Rookie Advanced level would be a shock for a player so close to the glory of the big leagues. He'd likely consider it a slap in the face, a sign that his dream career might not have a fairy-tale ending.

"It's been great," Vibes general manager and president Chris Phillips said. "This was not an easy process. It was super-stressful. Any time that you are trying to change anything, there is going to be a lot of pushback. We just knew we had to stick to our guns and have thick skin while we went through the rebranding process. I think once we were able to have our official unveiling and showed the world sort of what we have created ... we're just having a ton of fun with it."

Contrary to what a move several levels down would mean for a player, this was not a demotion. It was the execution of an idea for recreating the club as part of a series of relocations that shook up the Minor League Baseball landscape. For 31 years, Colorado Springs was the home of the Sky Sox, recently the Triple-A affiliate of the Milwaukee Brewers. Following last season, that franchise moved to San Antonio to play in the PCL as the Missions. The Double-A Missions of the Texas League moved to Amarillo, where they play as the Sod Poodles. The Pioneer League's Helena Brewers relocated to Colorado Springs to become the Vibes. All teams involved are owned by Elmore Sports Group.

For Phillips, who served as the GM of the Sky Sox last year and worked as an assistant GM with the team beginning in 2011, there were two major reasons why the Pioneer League made sense for a team playing in Colorado Springs.

"We have felt a little bit vindicated this year with some of the weather we had in April and May, which was one of the main reasons for the switch to short-season," he said. "The weather and altitude in Colorado imposes a difficult situation for Triple-A teams coming in here. You have guys that can get pulled up at any minute ... a pitcher pitching here at 5,500 feet and then going to sea level."

But these factors didn't make the decision easy. Phillips acknowledged that the move, which was announced June 21, 2017, caused some "confusion and misperception in the marketplace," and management carefully examined whether a total overhaul was worth the hassle.

"We talked a lot about whether rebranding was the right decision and, overwhelmingly, the staff agreed that it was," Phillips said. "We took that as an opportunity to say, 'Let's start with a clean slate. Let's get the city and the community talking about what's going on with the team.'"

Those efforts included a name-the-team contest, with finalists Oysters, Happy Campers and Throttle Jockeys ultimately giving way to Vibes, which the team came up with as a creative take on the Happy Campers moniker.

"We are really, really proud of what we have come up with," Phillips said. "It's been a big hit over the first 10 games. It's just a different, more kind of fun, lively, colorful Disney-like ballpark experience with what we have been allowed to do with the new brand."

Phillips also sees benefits of no longer being in the PCL, which requires extensive air travel. The Pioneer League schedule is full of bus trips in and around the Mountain Time Zone.

"It's huge cost-savings," Phillips said. "The PCL is notoriously the worst travel league in the county when it comes to flying, so it's helped out a ton. We do have some long bus trips now, and we had to get creative with our bus company and figure out ways to add additional drivers for some of those long trips."

Money saved from travel can go into other parts of running a baseball club. After a proposed new stadium deal fell through, the Vibes are focused on improving UCHealth Park, which opened in 1988 as Sky Sox Stadium.

"Now that we have made the decision to make this our permanent home for the next 15-20 years, we are able to use some of that savings and put it back into ballpark remodeling and improvements," Phillips said.

That stadium -- even as the team works to improve it -- is already an asset in that the Rookie Advanced-level team gets to play in a ballpark designed for Triple-A. The Vibes are the cream of the crop in terms of Pioneer League facilities, and Rocky Mountain's young players were impressed when they saw UCHealth Park for the first time.

The Vibes may make UCHealth Park the pride of the league. (Bobby Stevens/MiLB.com)

"I remember welcoming the bus when it first showed up here and meeting our manager for the first time and seeing these guys coming off the bus with these big, wide eyes and huge grins," Phillips said. "That's just something that you never really got to experience at Triple-A. They are super-excited. We went from probably the smallest market, not one of the best Triple-A stadiums in the country, to probably the largest short-season market, maybe second to Brooklyn, with one of the best stadiums now in the Pioneer League.

"These guys, they just signed their first professional contract," the GM added, noting another perk to working with players who are lower on the Minor League ladder. "They are super-excited and are willing and able to do whatever you ask of them, whether it's signing autographs or doing stuff out in the community. They want to make a name for themselves, because this is their first chance at the dream."

And despite the weather that makes Colorado Springs a challenging place for baseball in April, the Milwaukee organization was eager to keep an affiliate in the city roughly 70 miles south of Denver.2019 MiLB include

"The Brewers were really, really happy to be able to stay here," Phillips said. "It's just a bigger market [than Helena]. Colorado Springs is a fast-growing city. It was ranked the No. 2 city in the country to live in and it's been a good home for them."

But no matter how successful a rebrand is, it can take time for the entirety of a longtime fan base to buy all the way in.

"There is still some misperception out there," Phillips said. "The way we model ourselves, and the way 99 percent of Minor League teams model themselves, is of affordable family entertainment with the promotions we put on and making fans understand that we aren't going away. There's a matter of getting people out here one time and making sure they have a great experience and will come back."

Yet for everyone involved, the hardest part of the transition is in the past.

"The biggest challenge was going through the whole rebranding process," Phillips said, "but now that that is over and done with, we are having fun."