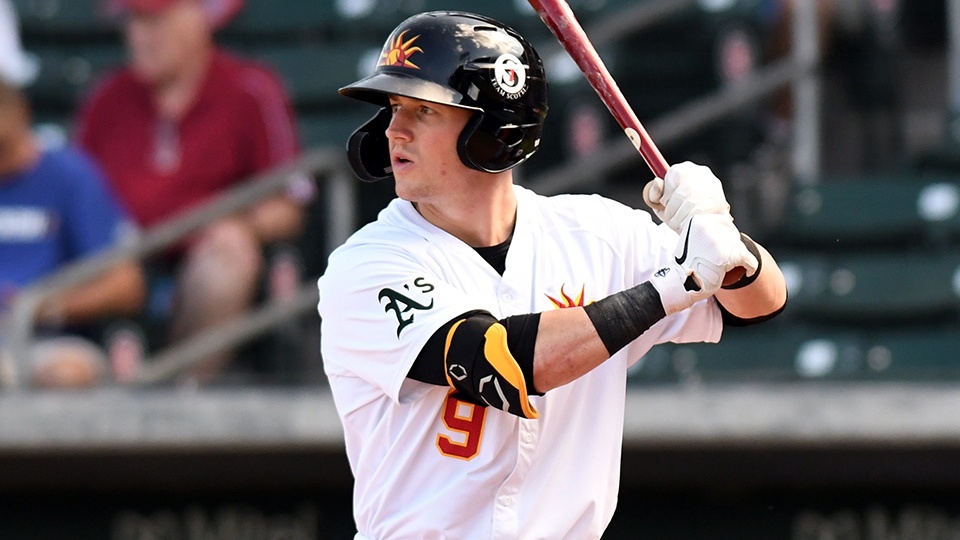 Greg Deichmann hit nine homers through his first 20 games in the AFL, five more than any other hitter. (Buck Davidson/Getty Images)

Greg Deichmann had to take a moment to think -- and for good reason. The A's No. 17 prospect leads the Arizona Fall League with nine home runs through 20 games. No one else has hit more than four. Forty-five percent of his hits during his time with the Mesa Solar Sox have gone over the fence. He's had quite a few dingers to sort through.

But the question was: Which one is his favorite? The answer needed a little bit of a preamble.

"Everyone is infatuated with the ones in the third or fourth deck," Deichmann said. "Back in college, that's what I was known for, those towering shots. This year in the AFL or at Double-A, I didn't have many of those. I have the power to do that, but I'd get out of whack trying to hit 480 feet when 330 counts just as much.

"So, yeah, I guess it was the first one I hit here. It was a cutter that I hit to left-center. It was a reminder to me that I'm locked in. When I can go the other way with authority, I know I'm right. And it also showed me that I can do that type of homer in this league."

Since that Sept. 22 roundtripper, the 24-year-old outfielder hasn't stopped showing off his power on the showcase circuit, and after two injury-riddled seasons in the Minors, he has built a strong case to be the MVP of a league filled to the brim with some of the game's best young talents.

What Deichmann said about his power in college is true. The left-handed slugger went deep 19 times as a junior at LSU in 2017 and finished with a .308/.417/.579 line over 72 games. He was named a Baseball America first-team All-American and all-SEC, and that level of performance, particularly in the slugging categories, vaulted him from a 26th-round pick by the Twins as a Draft-eligible sophomore in 2016 to a second-round selection (43rd overall) by Oakland the next year. After producing a .915 OPS at Class A Short Season Vermont, the outfielder had created a fair amount of intrigue going into his first full season.

Then the health woes came.

He made it two weeks into the 2018 season with Class A Advanced Stockton before getting placed on the injured list with what was originally called wrist inflammation. He tried to rehab twice in separate stints in the Arizona League in June and July before finally returning to the California League on July 31. Deichmann struggled the rest of the way and finished with a .199/.276/.392 line and six homers in 47 games despite playing in one of the Minors' most hitter-friendly leagues. The wrist inflammation was later diagnosed as a fractured hamate that required surgery at the end of the disappointing campaign.

"It all threw my swing out of whack and I was compensating in other ways," he said. "It wasn't until the offseason that I could get my swing right, and really, it wasn't even until Spring Training when I started to find it again. It was about three months of the year lost in Stockton, and I had jump back into the spring at a full go without many at-bats [166], all broken up."

Still, the A's pushed Deichmann to Double-A Midland. Whether because of the lack of previous playing time or his inability to get into a rhythm following a rushed offseason, the Louisiana native posted a .211/.282/.346 line and seven homers in his first 60 games with the RockHounds. In that 60th game on June 19, he lunged for a ball in right field, only to roll over his right shoulder. He was diagnosed with a Grade III AC joint sprain, an injury that caused him to miss two months. Even when he did return, Deichmann admitted it took more time for his comeback to feel complete.

"That was the biggest thing for me that took some time," he said. "Even with the hamate injury, that affects how I was swinging as well. I had to have the mind-set that, 'OK, I'm healthy; I can't be timid anymore.' Once I got cleared by the trainer, it's still learning to go at things head on."

Deichmann eventually found his stroke at a good time for the RockHounds, going 10-for-35 (.286) with three homers and a .976 OPS in his final 10 games of the regular season. He was an even better performer in the playoffs, hitting 7-for-21 (.333) with two homers and a double in a five-game Texas League semifinals loss to Amarillo.

With the AFL season starting earlier in 2019, Deichmann had a chance to keep the train moving when he first played for Mesa on Sept. 18, only 10 days after his final playoff game in the Texas League. But what allowed the locomotive to pick up steam was all that time off in the summer, and in Deichmann's mind, all that time to think.

"The biggest thing for me is to stay looser," he said of the conclusions he drew while on the IL. "It sounds simple, but really, that's it. In high school and college, I was always stiffer and more muscle-bound, and that's how I'd get out of whack. When I came back this year, it was a blessing in disguise. The first half of the rehab, I had to reflect back and see what I could change. Now, I got a fresh start in the Fall League too. Between both of those, I decided I needed to stay loose in the box and not overthink. Trust my abilities and that I can impact the ball.

"I'm always going to have power. When I get it, it'll go. But there are problems when I try to make it happen. That's what I reflected on, sitting out for seven weeks."

In the Fall League, it didn't take long for Deichmann to show how that power plays when he's fully healthy and confident. His homer on Sept. 22 started a string of three straight games with a long ball. From Oct. 6 until Thursday, he had gone deep five times in 10 games. The circuit's home run leader, has also topped AFL qualifiers with a .680 slugging percentage, 1.044 OPS and 51 total bases, while ranking second with 12 extra-base hits. He's squarely in the Fall League MVP debate, with his biggest rival being Twins infielder Royce Lewis, baseball's No. 9 overall prospect.

It's enough to not only bump up Deichmann's profile in prospect rankings, but also on his organization's depth chart. The corner outfielder mentioned he has a clear goal to play at Triple-A Las Vegas in 2020, and that would certainly put Oakland within reach. It doesn't hurt that he plays in an organization that successfully retools from within seemingly every season, and Deichmann closely followed the ascent of fellow outfielder Seth Brown this summer.

"I established a little bit of a relationship with him in Spring Training, and it was fun to see him make it up there after tearing it up," Deichmann said. "It's a confidence booster to know that it's possible. A guy sitting right next to you in the spring can get there in this organization. Everyone has their doubts when they play this game. They do. But to see a guy you know that's been around follow the path that leads right to the Majors, it only means good things for me."

But first things first. Deichmann will finish up his Fall League season Friday before heading into an offseason healthy, productive and on a high he hadn't previously experienced in pro ball.

"I'm going home with a fresh start, which is a big relief, and a little bit of a track record of success too," he said. "I want this offseason to be fun. One of the things I'll have to figure out is how to go through a full offseason of being healthy. I'll get a work routine down, but it's all about tailoring so that I can peak going into Spring Training this time."