No. 10 overall prospect hit by pitch Monday with Triple-A Buffalo 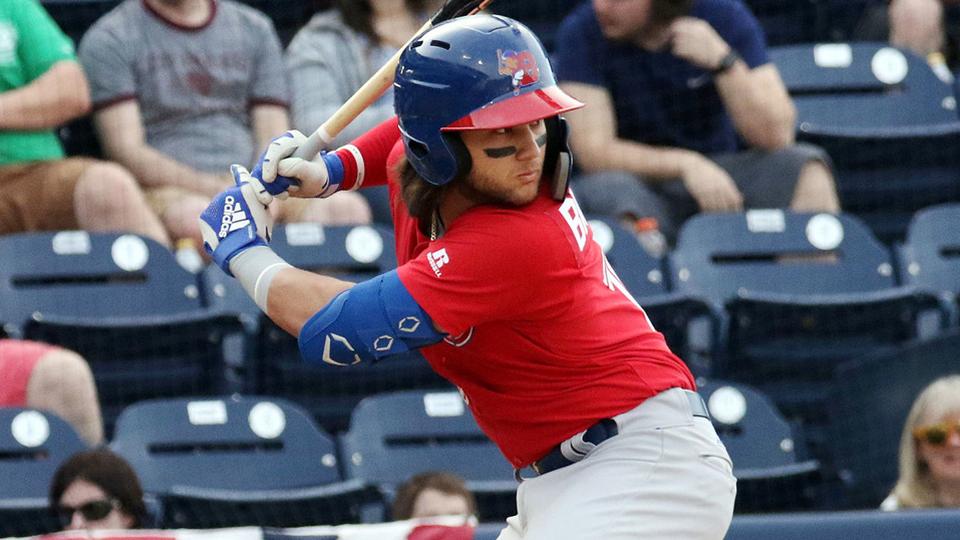 Bo Bichette has produced a career .897 OPS over four seasons in the Minor Leagues. (Carl Kline/MiLB.com)

One of the Minor Leagues' most exciting lineups could be without one of its most promising bats for some time.

No. 10 overall prospect Bo Bichette was diagnosed with a broken left hand, one night after he was hit by a pitch while playing for Triple-A Buffalo. He is expected to seek a second opinion and, until he does, there's no timetable for his return.

(Update: On Friday, Blue Jays general manager Ross Atkins told reporters, including MLB.com's Gregor Chisholm, that Bichette will not require surgery and that he is expected to be out four to six weeks.)

Making his second plate appearance in the third inning on Monday, the Blue Jays' No. 2 prospect took an 0-2 fastball from Syracuse left-handed starter Hector Santiago up and in and immediately crumpled to the ground, shaking his left hand in pain. Plate umpire Adam Beck called it a foul ball. After being examined by team trainer Bob Tarpey, he was replaced by pinch-hitter Andrew Guillotte.

Bichette was just starting to heat up in his first season at Triple-A. After a rough start, the 21-year-old shortstop had hits in eight straight games entering Monday, going 11-for-31 (.355) with one homer, one triple and two doubles. He's batting .250/.310/.404 overall with five extra-base hits in his first 14 games with the Bisons.

The 2016 second-round pick has become one of baseball's most exciting offensive prospects during his four seasons in the Blue Jays system and, alongside top overall prospect Vladimir Guerrero Jr., comprises half of the Minors' highest-ranked teammate tandem. A .325 career hitter in pro ball, Bichette has plus-plus potential at the plate and could develop above-average power.

That level of talent is why Bichette was expected to push for a Major League debut this year, a move that is on hold while he recovers.