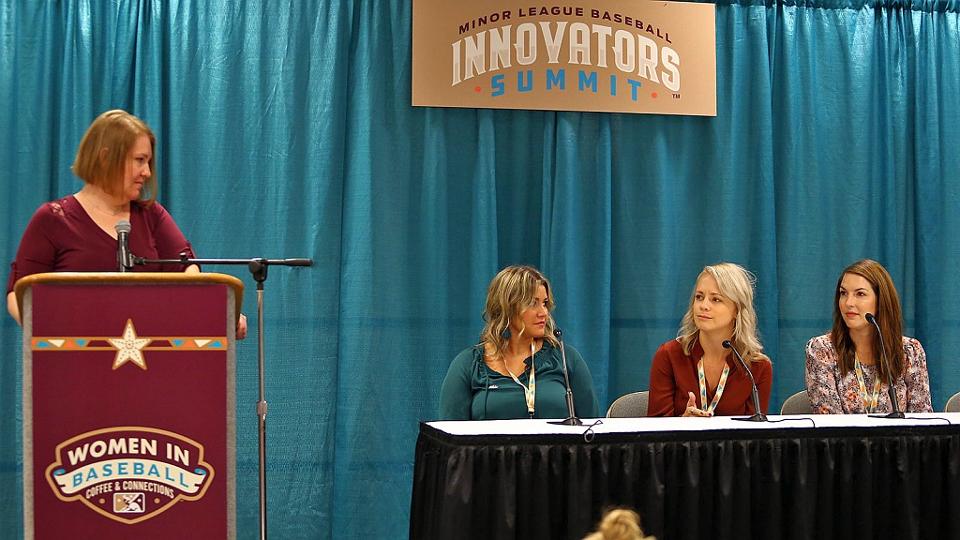 On Wednesday morning, women and men executives in Minor League Baseball filled the Rio Grande room of the El Paso Convention and Performing Arts Center in El Paso, Texas, to discuss the challenges facing women in baseball and the steps they can take to find solutions in their offices and across the industry.

Opening with a welcome from Reno Aces General Manager Emily Jaenson, the highest-ranking woman in Minor League Baseball, the 2019 Women in Baseball: Coffee & Connections, presented by Jostens, explored topics and issues regarding the challenges and triumphs women in Minor League Baseball experience every day. Designed to encourage discussion between women and men, attendees shared their stories and ideas about how to promote gender inclusion in their organizations and throughout Minor League Baseball.

Alongside a buffet breakfast and (obviously) coffee, the morning included opening remarks from Minor League Baseball President & CEO Pat O'Conner, observations from high-ranking executives such as Jaenson and an interactive group discussion on hypothetical situations concerning female employees that could arise in MiLB offices. The event also included a panel composed of moderator Katie Woods (assistant general manager, Lancaster JetHawks), Jessica Aveyard (director of entertainment, Winston-Salem Dash), Danielle Gaw (director of corporate partnerships, Nashville Sounds) and Jennifer Johnson (director of marketing, Frisco RoughRiders) that discussed a variety of topics, from the problems they've faced to the leaders who helped them advance in their careers.

"If we can practice communication, honesty, trust and hard work, it will serve us all well in this industry and will get us where we want to go, male or female. Surround yourself with those who exude the values that you hold most sacred, and you will find nothing but success," Jaenson said.

In recent years, the number of high-ranking executives employed in Minor League Baseball has grown, though there is always room for growth and improvement. Even so, growth of any kind should be celebrated, and the evolution of women in baseball over the years is a testament to MiLB's Diversity and Inclusion initiative, which includes Women in Baseball programming.

"When we are with major brands and major sports properties, they come to us in recognition of what we've done in the diversity and inclusion space and ask us how we do it. That is very reflective of what our employees across the country put forward in the [Diversity and Inclusion] initiative, which is true, transparent and genuine. Our initiative is aggressive, and it's what we are committed to doing. But we can't do it without the support of our teams," said Minor League Baseball President & CEO Pat O'Conner.

MiLB's Women in Baseball initiative has been promoting gender inclusion since its inception in 2008. Though a more recent addition to programming, Coffee & Connections has been furthering that mission since 2017 and has always been open and welcoming to all genders. The group values men's perspectives in the conversations and their willingness to understand how to interact most effectively with women in their offices.

"Hopefully, these men leave with a different perspective or maybe a different way to approach the women in their office. Maybe there are problems their current teams are facing that women on their staff may not feel comfortable going to them for, and they can leave here with an understanding of how to identify and handle those problems. Hopefully we're being a voice for all the women in baseball, not just the ones in this room," said Gaw.

While the women, for the most part, are the ones presenting the issues they face, the men in attendance see value in their colleagues' voices. As the event provides a setting for discussions likely not had with their coworkers prior to the event, the men of MiLB can hear and better understand their female counterparts and their perspectives in a deeper way than they would otherwise be afforded.

"A lot of what I learned stood out to me just because it's a different perspective. There's no way I could put myself 100% into the shoes of a women in terms of understanding what they have to go through and what they have to consider as they go through their day-to-day interactions, which goes all the way to how they interact with different clients and sponsors and the way they're regarded by those people because of their gender," said Ben Hughes, manager of marketing and promotion for the Fayetteville Woodpeckers.

Intended to be a forum for discussion and education, the Coffee & Connections attendees left with a better understanding of their colleagues and counterparts. From Triple-A to Rookie Advanced teams, personnel at all levels of Minor League Baseball presented their ideas and perspectives and left everyone there with more ideas and a better understanding of each other than they had when they arrived. One of the most important things these women want their colleagues to understand is that they are their positions first and their gender second, when it comes to the workplace. The advice they have for the men in our industry can be summed up best by recognizing that distinction, and Woods said it best:

"We have to start really looking past gender. We're not the female version of our position. We are this position, and we're the best for the role."

Mackenzie Parker is an associate at Minor League Baseball. This story was not subject to the approval of the National Association of Professional Baseball Leagues or its clubs.