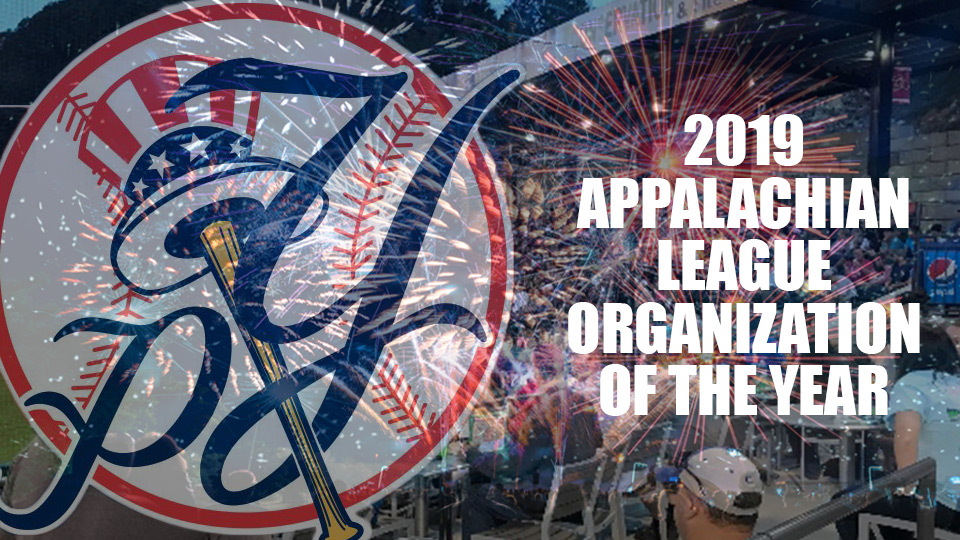 PULASKI, Va./ CHAPEL HILL, N.C. - The Appalachian League today announced the Pulaski Yankees as the League's 2019 Organization of the Year, presented annually to one club that exemplifies the standards of the complete baseball franchise, based upon franchise stability, contributions to league stability, contributions to baseball in the community and the promotion of the baseball industry. As the 2019 Organization of the Year, Pulaski will serve as the League's nomination for Minor League Baseball's John H. Johnson President's Award to be presented at the 2019 Baseball Winter Meetings in San Diego, Calif. in December.

"We are extremely honored that our peers in the league voted us as the 2019 Organization of the Year," said Pulaski Yankees General Manager Betsy Haugh. "I'm extremely proud of the work our staff put into the 2019 season and equally as appreciative of the support from the Pulaski community. This award belongs to the fans just as much as it does our staff, and we are already looking forward to building on this year's success for an even better 2020 season."

For the fifth consecutive season, the Pulaski Yankees led the Appalachian League in attendance, welcoming the largest number of fans in franchise history to Calfee Park in 2019. The Yankees saw significant increases in both sponsorship and gameday revenue as compared to 2018 and completed a multi-million dollar renovation to Calfee Park that has received national attention as part of a two-year construction upgrade plan for the ballpark. This renovation placed an emphasis on fan experience, adding a three-tiered party deck, kid zone with new inflatables, and covered concourse with additional concessions points of sale. Thanks in part to these renovations, Calfee Park was voted the best rookie-level ballpark in American in Ballpark Digest's annual fan competition.

In addition to physical upgrades to the ballpark, the Yankees also upgraded their promotional schedule, working with local officials and state fire personnel to have fireworks at Calfee Park for the first time in over 20 years, despite the park's location in a residential area. The organization also hosted celebrity meet and greets, bringing in Ken Griffey Sr. and Dwier Brown (Field of Dreams) and added live post-game music to select Thirsty Thursday games. In total, the Yankees had weekly promotions for each day of the week, seven premium giveaway nights, and numerous theme nights including fan favorites such as Agriculture Night 2.0 and the Big Apple-achian Rivalry with the Kingsport Mets. The Yankees opened gates at 4pm for all games (after the opening homestand) to allow fans to spend more time in the ballpark and watch batting practice.

The Pulaski Yankees also placed an emphasis on community involvement, introducing #CalfeeCares - an organizational mission to give back to the Pulaski and New River Valley communities. To date, the Yankees have contributed over $40,000 in charitable donations with more to be finalized, including funds raised from two charity softball games hosted at Calfee Park. According to the organization's charities report, the Yankees have participated in 23 staff events to date, with over 200 volunteer hours. For initiatives focused on local children continuing Shelor Motor Mile's Growing the Future mission, the Yankees hosted their first-ever 5K, raising over $1,000 for Big Brothers, Big Sisters of Southwest Virginia, welcomed nearly 2,000 students to Calfee Park for the organization's first Field Trip Day, and created the Pinstripe Pals Kids Club. The Yankees also partnered with the American Cancer Society and the BairFind, among other charitable organizations, while also participating in four MiLB Community initiatives.

"It's taken a total team effort for all ballpark employees, and we're very proud of everyone that was involved," said Calfee Park Baseball owner David Hagan.