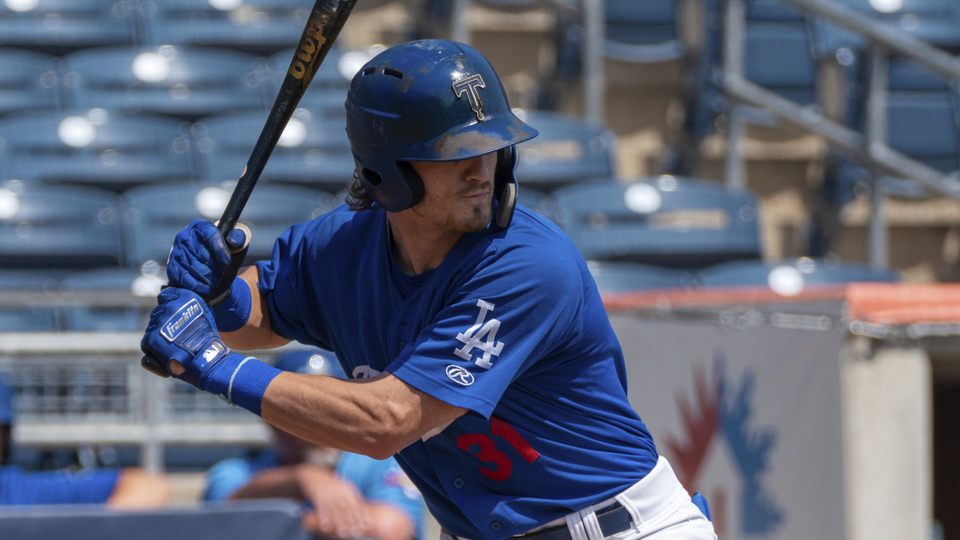 Donovan Casey had another hit Sunday, giving the outfielder a hit in all ten playoff games for the Drillers. (Rich Crimi)

TULSA - For eight innings Sunday afternoon, the Tulsa Drillers seemed headed to back-to-back Texas League Championships for the first time in franchise history. But, Amarillo had other plans as things quickly unraveled for the Drillers bullpen. Leading 3-1 entering the ninth inning, the Drillers could not complete the historic win as two walks without a strike and a misplay on a sacrifice bunt, loaded the bases. Taylor Trammell cleared them, depositing a pitch from Nolan Long into the bullpen beyond the right field fence for a grand slam home run. Hudson Potts added a three-run blast later in the inning to cap an unlikely comeback and give Amarillo an 8-3 championship-winning victory.

It was a heart-wrenching loss for the Drillers but a historic one for Amarillo. It was a championship season for the club in its first year of play as affiliated, professional baseball returned to the city for the first time in nearly 40 years.

The Drillers seemed to have reserved the Texas League Championship trophy for a second straight season on Sunday as they took a 3-0 lead in the deciding game. The game was scoreless through 4½ innings when pinch hitter Jared Walker was hit by a pitch. With two outs, Walker swiped second base, allowing him to score the game's first run on a line-drive single by Jeter Downs.

Downs struck again to add to Tulsa's lead in the bottom of the seventh. His two-out homer over the Busch Terrace in left field gave the Drillers a 3-0 lead. It was the shortstop's fourth homer of the postseason.

Amarillo finally got on the scoreboard on a bases-loaded walk from Tulsa reliever Shea Spitzbarth in the top of the eighth to cut the Tulsa lead to two runs.

Three outs away from a second straight title, things fell apart for the Drillers in the top of the ninth. Nolan Long entered the game for Spitzbarth and his first eight pitches were out of the strike zone to promptly put the tying run on base. Long and third baseman Cristian Santana then miscommunicated on a sacrifice bunt, loading the bases for Amarillo. Long found the strike zone against Trammell, but the outfielder eventually blasted a 2-2 offering from the right-hander well over the right field fence for a grand slam homer that turned a two-run Tulsa lead into a two-run Amarillo lead.

The inning continued, and after a one-out hit from Edward Oliveras, Ryan Moseley replaced Long. Moseley got an out before giving up a hit to Luis Torrens that deflected off Santana's glove. With runners at first and second, Potts hit the next pitch over the left-field fence for a three-run homer that made it a seven-run inning for Amarillo.

Travis Radke made quick work of the Drillers in the bottom of the ninth. With a cheering contingent of Amarillo fans on its feet, he set the side down in order to bring on the trophy presentation.

The ninth-inning rally overshadowed Michael Boyle who turned in an extraordinary performance in the top of the fifth out of the Drillers bullpen. With the game scoreless, Boyle came into a bases-loaded no out situation and was able to keep Amarillo from scoring. The lefthander performed a magician's act, striking out Brad Zunica and getting a fielder's choice grounder from Trammell in which the lead runner was retired at home. Boyle completed the escape by getting Castillo on a fly out to center to keep the game scoreless.

*Wong and Donovan Casey both extended their perfect postseason hitting streaks for Tulsa. They both got hits and finished the season by hitting safely in all ten playoff games for the Drillers.

*It marked the third straight season that the Drillers season ended in the Texas League Championship Series. It is the first time in franchise history that the team qualified for the TLCS in three consecutive years.

*The loss left Tulsa manager Scott Hennessey on 16 postseason wins in his three-year career with the Drillers. It is the most playoff wins ever for a Drillers manager.

UP NEXT:  2020 Opening Night
Frisco RoughRiders at Tulsa Drillers, Thursday, April 9, at 7:00PM