Getting to know Razor Shines and the Dodgers 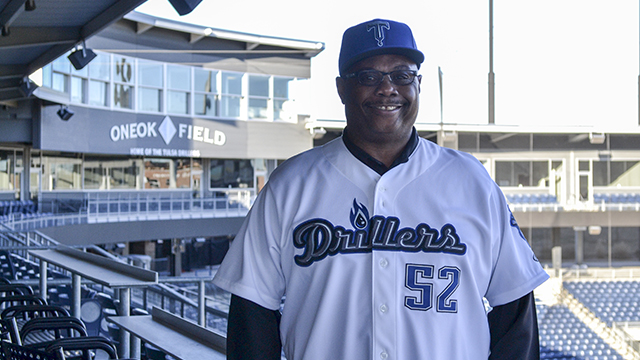 With pitchers and catchers set to report in a matter of weeks, baseball is in the air once again. Some fans may be wondering what the Tulsa Drillers will look like with the team changing their parent club affiliation from the Colorado Rockies to the Los Angeles Dodgers. Although the Drillers are not changing their team name, fans will see a brand new cast of players and coaches in the 2015 season.

This will be just the third different affiliation for the Drillers since they came to Tulsa in 1977. After being the Double-A club for the Texas Rangers for 26 years, the team joined the Rockies organization from 2003 through the conclusion of the 2014 season. Now the team will join an organization with a rich tradition of baseball excellence.

The Dodgers boast over 60 players, coaches, scouts, front office executives and broadcasters in the Baseball Hall of Fame. With an ownership group highlighted by NBA star Earvin "Magic" Johnson, the Dodgers are committed to winning.

They also have a firm commitment to developing their future stars through their minor league farm system. Their recent hiring of Andrew Friedman from the Tampa Bay Rays as President of Baseball Operations and Farhan Zaidi from the Oakland Athletics as the General Manager demonstrate this focus.

According to MLB.com the Dodgers currently boast the #1 overall left-handed pitching prospect in baseball in Julio Urias, the #2 overall outfield prospect in Joc Pederson, and the #4 overall shortstop prospect in Corey Seager, among many others.

Leading the Drillers into their first season with the Dodgers is a veteran baseball manager in Razor Shines. Although he and his wife, Leann, reside in Austin, Texas during the offseason, he is no stranger to Oklahoma as his son played baseball for the OSU Cowboys and his daughter attended the University of Oklahoma. To learn more about Shines' coaching and playing career, check out this article: READ HERE

Shines recently visited Tulsa to meet with the local media and he took some time to answer some questions Drillers fans might have.

Drillers: What can you say to give the fans an idea of what they can expect to see on the field in 2015?

Drillers: What do you know about the Texas League? Have you ever played in or heard about the league?

Drillers: Are there any names of players you can give who might be in Tulsa coming out of Spring Training?

Shines: "Well in my opinion, you're dealing with an organization that's loaded, and I mean loaded, with explosive players. I'll just mention a couple pitchers because of the way the Dodgers have done it in the past. So I'm pretty sure that these guys are going to be here to start out unless something crazy happens and they make a higher club.

But we're talking about an 18 year old kid in Julio Urias. He's either #1 or #2 on the prospects list depending on what publication you're looking at. And I'm not just talking about the Dodgers, I'm talking about baseball. This guy is exciting. He's 18 years old, a left-handed starting pitcher and (people should) come out and see him because he won't be here long. This guy is explosive.

Another pitcher, he was the Dodgers first round draft choice a couple of years ago, is Chris Anderson. He's a big kid, he's a power pitcher and he finished last year in the California League. His last few starts were outstanding; I think he struck out double digits the last 3 starts he had in the regular season."

Drillers: Thank you Razor. We're looking forward to the 2015 season!

The Drillers officially begin their affiliation with the Dodgers when they open the 2015 season at home Thursday, April 9th at 7:05 PM against the San Antonio Missions at ONEOK Field. Season ticket and group plans are now available and can be purchased through the Drillers ticket office by calling 918-574-5901.