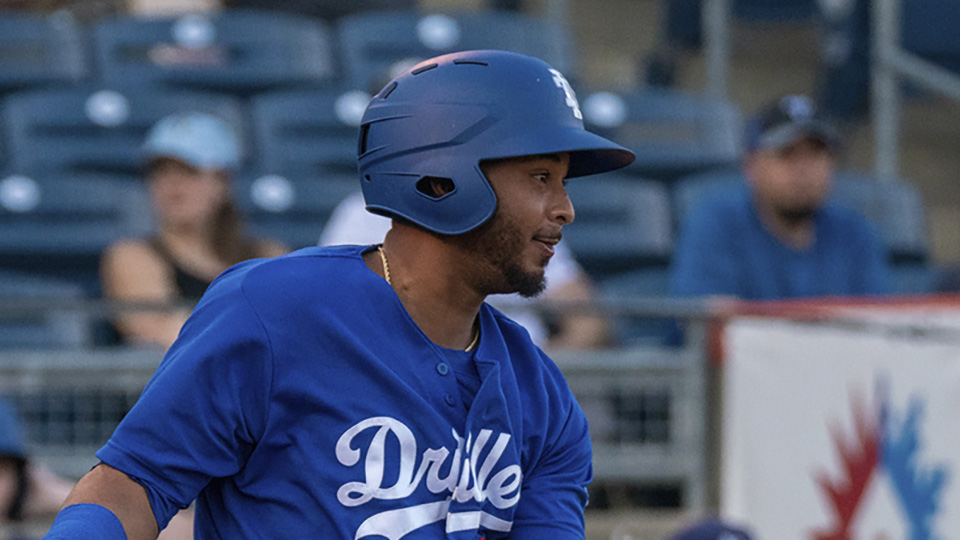 Angelo Mora had three hits and three runs batted in for Tulsa in its 8-3 win Thursday night at ONEOK Field. (Rich Crimi)

TULSA, OK - On a night that "Henry Rowengartner" was the scheduled starting pitcher for the Tulsa Drillers, it was another former major leaguer who stole the show at ONEOK Field on Thursday. Knuckleballer J.D. Martin turned in his second straight strong outing, limiting Northwest Arkansas to just one run in seven innings, helping the Drillers to a 8-3 win.

It was the fourth straight victory for the Drillers who were coming off a three-game sweep of the Cardinals in Springfield.

Martin, who has pitched two seasons in the majors with the Washington Nationals, surrendered just four hits in his seven innings of work. In his last two starts, he has given up just 2 runs in 13 total innings, for a 1.39 ERA. The victory improved his record to 2-3.

The only damage against Martin came early when the Naturals took a brief lead in the top of the second on a RBI single from Travis Jones. The Drillers quickly tied the game in the home half of the second on Jared Walker's solo home run, his third of the season.

Tulsa took the lead for good in the third. Lux led off with a base hit and scored on Angelo Mora's triple. Mora came home to make it 3-1 on a sacrifice fly from Chris Parmelee.

The offense continued to produce for the Drillers with four more runs in the fourth. Zach McKinstry doubled home the first two runs, and Mora plated two more with a base hit.

Lux struck again with his Texas League-leading 11th home run of the year in the bottom of the sixth.

The Naturals closed the scoring with a pair of runs off reliever Yordy Cabrera in the eighth.

*Rowengartner (actor Thomas Ian Nicholas), who was also featured on a bobble giveaway on Thursday, was "announced" as the starting pitcher for the Drillers, but he was removed by manager Scott Hennessey after several warmup throws that were not his renowned "high, stinky cheddar" and his "floater pitch" failed to find the strike zone.

*It was Tulsa's first win over Northwest Arkansas this season. The Naturals swept a three-game home series with the Drillers earlier this month.

*Lux's second straight big game raised his season batting average to .329. His ten-game hitting streak matches Logan Landon and Cody Thomas for the longest by a Tulsa hitter this season. In his streak, Lux is hitting .444 (20-45). In addition, it marked the third straight game that Lux has homered. Earlier this season, he hit a home run in four straight games. The shorstop not only leads the TL in homers, he is second in batting average, trailing only teammate Omar Estevez.

*Mora finished with three hits in the game and picked up three runs batted in.