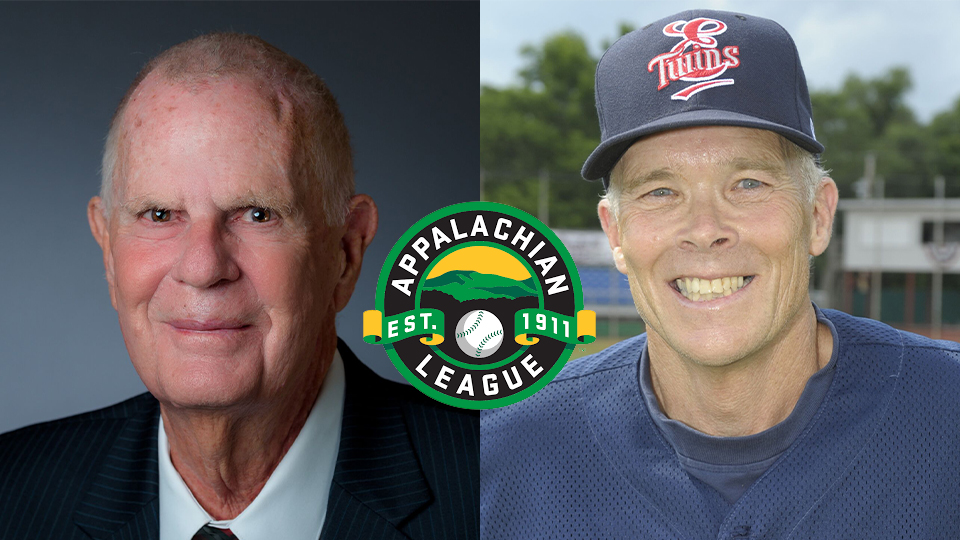 Lee Landers served as President of the Appalachian League from 1996-2018, earning multiple awards during his tenure, including King of Baseball (2017), the Warren Giles Award for outstanding service as a Minor League President (2001), and the Bowie Kuhn Award from Baseball Chapel (2008). Under his leadership, four Appalachian League teams were honored with the Bob Freitas Award for the Short Season classification. Landers' career in professional baseball began in 1959 in Fresno and included a 12-year tenure with Springfield (IL) during which he was named Vice President of the St. Louis Cardinals in 1986.

"It's an honor," said Landers. "I love the League, and it's always an honor to be recognized by your peers."

"I'm very appreciative to all involved with the selection of the members of the Appalachian League Hall of Fame," said Smith. "With all of the quality of players/staff and administrators that have been involved with the Appy League through the years, it certainly is an honor."

Randy Boyd helped ensure the continued operations of the Johnson City Cardinals when Boyd Sports assumed management of the team in 2016 and gave roughly $400,000 in investments to the Cardinals' baseball facilities, including an artificial turf infield, party deck pavilion, locker room upgrades, on-line ticketing system and concessions renovations. Boyd is the founder and chairman of Radio Systems Corp., a Knoxville-based business, and was appointed interim president of the University of Tennessee in September 2018. Boyd Sports operates the Johnson City Cardinals, Greeneville Reds, and Elizabethton Twins in the Appalachian League and the Double-A Tennessee Smokies of the Southern League.

Boyce Cox is credited with keeping baseball in the city of Bristol after being named president of the Bristol franchise in 1983 and working as General Manager until the time of his death in 2007. He was named the Appalachian League Executive of the Year multiple times and was honored by the city of Bristol by officially naming the Bristol facility as "Boyce Cox Field at DeVault Memorial Stadium." Cox was a first baseman in the Appalachian League in 1943 and 1946 for the Bristol Twins, serving in the U.S. Navy in 1944 and 1945.

Chauncey DeVault was President of the Appalachian League from 1947-79. In 1979, the National Association presented him with the George Trautman Award for outstanding service to baseball. The Bristol stadium is named in his honor, as "Boyce Cox Field at DeVault Memorial Stadium." He was named King of Baseball in 1969.

Bobby Floyd was the Kingsport Mets manager from 1987-88, winning the 1988 Appalachian League Championship and Manager of the Year honors. Floyd, currently a Senior Advisor for the New York Mets, has spent 55 years in the Major Leagues and Minor Leagues as a player, manager, or coach, 34 of which have come in the New York Mets organization. Floyd played seven years (1968-74) in the Major Leagues for the Baltimore Orioles and Kansas City Royals.

David Hagan is the owner of Calfee Park Baseball and is credited with bringing the New York Yankees affiliate to the small, rural community of Pulaski. Hagan and the Shelor Automotive Group purchased Calfee Park from the Town of Pulaski in 2014 to ensure baseball would remain in Pulaski and have since invested more than ten million dollars in renovations to the ballpark facilities, field, team, and hotel where the players stay. Under Hagan's leadership, the Pulaski Yankees have led the Appalachian League in attendance each year since 2015 and were recognized with Minor League Baseball's John H. Johnson President's Award in 2019 and the Bob Freitas Award for the Short Season classification in 2016.

Bill Halstead was President of the Appalachian League from 1982-95. He played for the Kingsport Cherokees in 1947, appearing in 43 games. He played an additional seven seasons in the Mountain States League, making the All-Star team five straight years. Halstead served in the U.S. Navy from 1943-46 before attending Appalachian State where he earned four letters in football and two in baseball.

Andruw Jones began his professional career with the Danville Braves in 1994, where he batted .336 with 48 hits in 36 games. He went on to play 17 seasons in Major League Baseball, during which he was a five-time All-Star, 10-time Gold Glove Award winner, Silver Slugger Award winner, and Hank Aaron Award winner for the National League. He was inducted into the Atlanta Braves Hall of Fame in 2016.

George McGonagle, a former Air Force Veteran, has been club President in Bluefield since 1988 and has been with the organization since 1951. He was General Manager for Bluefield from 1995-2007, and has since served three stints as the Interim GM. In 2012 he was honored as the King of Baseball and has been named Appalachian League Executive of the Year three times, as well as leading Bluefield to recognition of the Bob Freitas Award for the Short Season classification in 1996.

Scott Niswonger is credited as one of the main individuals responsible for bringing Minor League Baseball to Greeneville, TN, contributing $9.5 million to Tusculum University athletic facilities in 2004 to attract professional baseball. Niswonger, co-founder of Landair Services and founder of Forward Air Corporation, is also the Chairman of the Niswonger Performing Arts Center in Greeneville and established the Niswonger Educational Foundation in 2001 to create opportunities for individual and regional growth through educational programs, scholarships, and other charitable activities. Mr. Niswonger is a member of the Presidents Executive Council at Purdue University and also the Deans Council for Purdue as well as a Chairman of Purdue Aviation. He also serves on various Boards throughout the region at the collegiate level.

Miles Wolff brought the Burlington franchise to the city of Burlington in 1986. Under his leadership, the organization was recognized with the Bob Freitas Award for the Short Season classification in 1996 and has won the Appalachian League Promotional Trophy five times and the Community Service Award in 2017. Five different General Managers have been recognized as the Appalachian League Executive of the Year for a total of eight honors during Wolff's tenure as President. Wolff was selected as the 79th most important person in baseball history by John Thorn and Alan Schwarz in the eighth edition of Total Baseball: The Ultimate Baseball Encyclopedia and the 8th best owner in sports by ESPN 25, a history of the network.