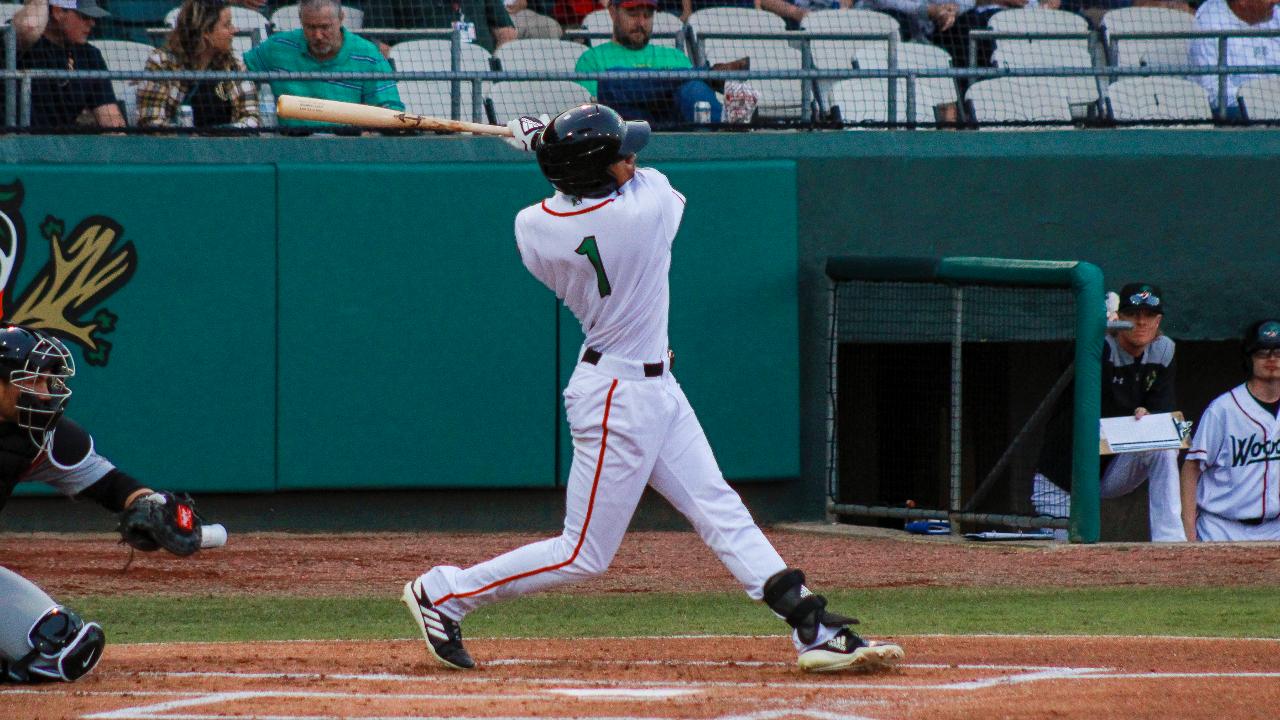 Fayetteville, N.C. - The Down East Wood and Fayetteville Woodpeckers traded 3-0 shutout wins, with the Woodies taking game one, and the 'Peckers claiming game two, Wednesday.

The Wood Ducks seized the early lead with runs in the first two innings. Julio Pablo Martinez led off the first with a single down the left field line, and Sam Huff followed with a single through the right side to beat the shift. After a flyout from Curtis Terry put runners at the corners, Sherten Apostel grounded into a fielder's choice to put the Wood Ducks ahead, 1-0. Then in the second, Yanio Perez lined a one out single into left field, and after he stole second, Bubba Thompson ripped an RBI double that bounced over the wall in right center to put Down East ahead, 2-0.

Sal Mendez (win, 1-0) was excellent for the Wood Ducks on the mound. He did not allow a hit through the first four innings, facing just two over the minimum. Miguelangel Sierra led off the fifth inning with a home run ball to left field, but he missed home plate, and on an appeal was called out, to keep the shutout intact. Mendez pitched into the seventh, allowing just two hits on the night. He walked three, struck out three, and faced just two over the minimum.

Down East added an insurance run in the sixth. With two outs, Yohel Pozo singled into left field. Eric Jenkins pinch ran for him, stole second, and advanced to third on a low throw. Perez followed with a single through the left side to push the advantage to 3-0.

Joe Kuzia (save, 1) took over with one on and one out in the seventh. He gave up an infield hit and a walk to load the bases, but was able to get out of the inning and preserve the shutout victory.

All three runs in the ballgame came in the Fayetteville third inning. Scott Schreiber led off the frame with a swinging bunt single to third base. Jeremy Pena then followed with a home run to left field to put the Woodpeckers ahead, 2-0. Following the home run, Cal Stevenson was hit by a pitch, and Marty Costes also reached on a swinging bunt single against Scott Engler (loss, 0-1). Chandler Taylor then walked to load the bases, at which point Josh Advocate took over out of the bullpen, but issued a walk to David Hensley to force in a run.

Austin Hanson (win, 1-0) danced around trouble to work 5.1 scoreless in the start for Fayetteville. The Wood Ducks threatened in the third inning when Bubba Thompson singled to left to begin the inning, and then stole second, and advanced to third on a groundout. However the Wood Ducks were unable to score him. Then in the fourth, Down East had second and third after Curtis Terry was hit by a pitch and Yohel Pozo hit a ground rule double, but were left stranded.

With two on and two out in the sixth inning, Yanio Perez was called safe at first base on an infield single to load the bases, but after conferencing, the umpires overturned the call, ending the threat.

Humberto Castellanos (save, 1) struck out three in 1.2 scoreless innings out of the bullpen.

No game will be played Thursday, with Hurricane Dorian imminent. Game three of the series is still scheduled for Friday at 7 p.m. at Grainger Stadium. Following Thursday, the Wood Ducks and the Carolina League will reassess the field conditions and forecast and at that point announce any additional changes to the playoff schedule, if needed. Right-hander Tim Brennan (4-3, 4.27) will make the start for the Wood Ducks, while Fayetteville will counter with righty Jojanse Torres (9-0, 1.94). The broadcast will begin at 6:50 p.m. on 960AM The Bull, and online at 960thebull.com as well as on the MiLB First Pitch and TuneIn Radio Apps. Postgame fireworks will follow the action presented by WNCT. For tickets and more information visit woodducksbaseball.com or call (252) 686-5172.