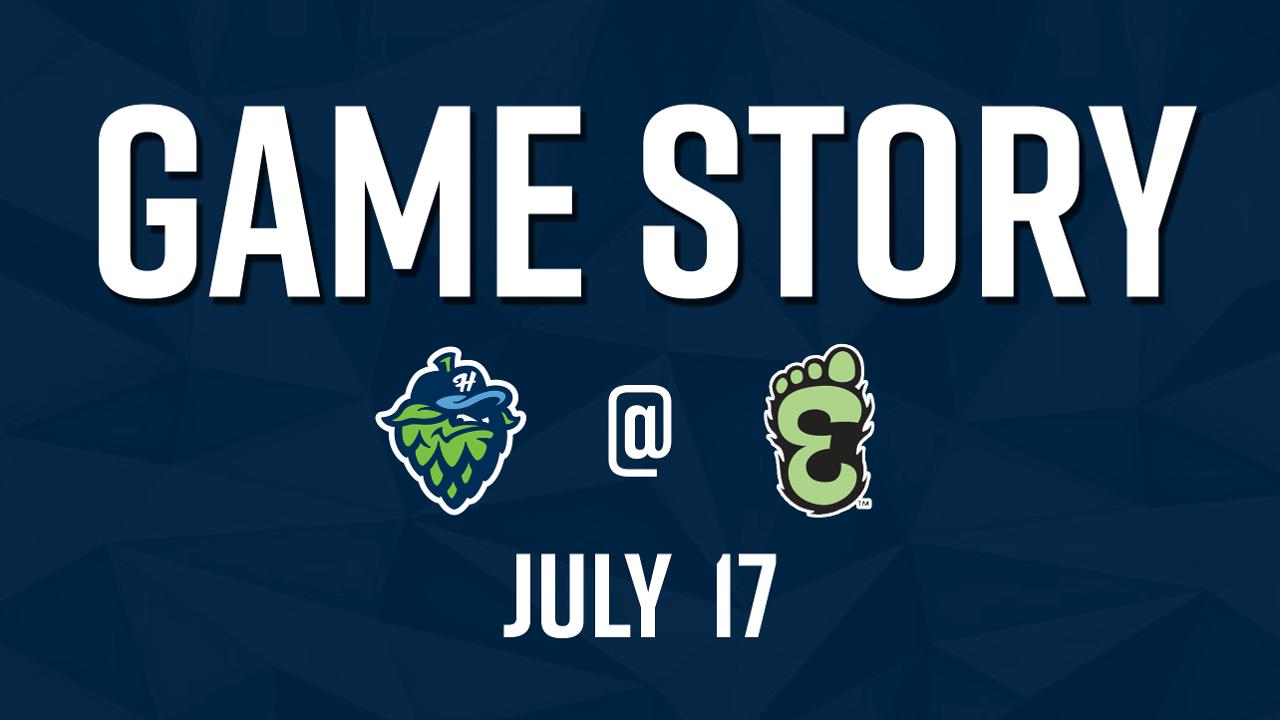 The Eugene Emeralds are out of the first-half playoff race, but P.K. Park still haunts the Hops as they chase a NWL Division title.

After the Hops took their first lead of the game on a two-run Steven Leyton homer in the top of the seventh, Eugene answered with a two-out, bases-clearing triple by Edmond Americaan in the bottom of the inning and held off the Hops 5-2 in the opener of a three-game series in Eugene that has major playoff ramifications for the visitors.

The Hops, who just two nights ago were batting .299 as a team with runners in scoring position, struggled for the second straight night in scoring situations, going 0-for-7, while the Emeralds got the key blow with the sacks jammed that decided the game.

Trailing 1-0 in the seventh, Hillsboro leadoff batter Jorge Barrosa drew a one-out walk from Eugene reliever Hunter Bigge (1-0), a 12th-round draft pick out of Harvard University. Leyton jumped on the very next pitch and drove it just to the left of the P.K. Park scoreboard in left center field for his fourth home run of the season to give the Hops a 2-1 lead.

In the bottom of the seventh, Justin Garcia (0-1), who worked a perfect sixth inning, struck out Grayson Byrd before Nelson Maldonado lifted a weak pop that landed perfectly between the mound and second base for an infield single. With two outs, Jonathan Soto walked to put runners on first and second before Jacob Olson sent a hard ground ball down the third base line. Hops third baseman David Garza, Jr. made a great sliding stop, but as he raced to the bag, the ball slipped out of his glove as he and Maldonado got there simultaneously. With the bases juiced, Americaan, blasted a 1-0 Garcia pitch out toward the scoreboard that was just a couple feet short of a grand slam, cleaning off the bases to give Eugene a 4-2 lead.

The Ems added an insurance run in the eighth as former Oregon State Beaver John Pomeroy recorded the final six outs for his first Northwest League save.

Americaan and Maldonado each had two hits for the Emeralds. Maldonado has hit in all seven games since joining Eugene and is batting .500 (14-28) in the NWL. Dalesandro continued a strong week, collecting two of the Hops six hits. Ricky Martinez reached base three times with a hit and a pair of walks, extending his hitting streak to six games.

The start of the game was delayed for more than 10 minutes as the grounds crew was asked by Eugene starting pitcher Eduarniel Nunez to fix the mound, then was ordered to redraw the batters box lines by the umpires. The Hops also batted out of order early in the game, meaning Jesus Marriaga did not bat in his first turn in the order. Marriaga finished 1-for-3.

Game two of the series features a showdown of high draft picks when former Duck Ryne Nelson (2nd round) takes to a familiar hill for the Hops to face Cubs' first-rounder Ryan Jensen. Pregame airtime is at 7 p.m. on NBC Sports Northwest Rip City Radio 620 AM with the first pitch (barring any last minute field alterations) at 7:05 p.m.