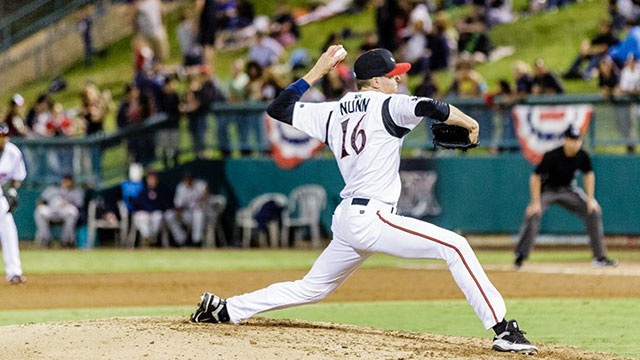 In a game where so much is made of physical accomplishments, whether it's the number of hits you collect or your ratio of strikeouts to walks, the importance of mental agility can often be overlooked. Baseball is as much a mind game as it is a muscular one, and any player with big league dreams must develop their mental acuity in order to one day put on a Major League uniform. Storm pitcher Chris Nunn is a true student of the game, and his development as a professional has hinged on his ability to improve not just how he pitches, but how he thinks.

Christopher Jared Nunn was born on October 5, 1990 in Atlanta, Georgia. While he was born in the Peach State, his family moved to Memphis, Tennessee soon after, and it's the Bluff City that Nunn calls home. For as long as he can remember, Chris has been playing sports. "It was all sports all the time," he said. "I played football, basketball and baseball until eighth grade then just basketball and baseball after that. I rode dirt bikes back in the day and was outdoors a good bit. I pretty much did anything sports-related, and I read a lot too." His initial interest in baseball happened organically, as both parents weren't fans of the game until he started playing. "They love it now," Nunn laughed. "Especially my mom, she loves it probably more than I do! When I was about five I started playing [locally] and I was about eight when I started playing travel ball and loved it. I played travel ball every summer until high school, and that's where I got better and where I saw that I was going to be a better pitcher than hitter."

After a quick detour to Briarcrest Christian School, which was featured in the movie The Blind Side, as a freshman in high school, Chris returned to Harding Academy that same year to continue his schooling there. His on-field potential was apparent from the outset, as Nunn dominated on the mound that first year of high school. Things changed the next season after young Chris grew four inches prior to his sophomore campaign. "I could not throw a strike to save my life," Nunn recalled. "I was 6'4", 170 pounds. I was actually considering quitting baseball and going back to football to try and be a quarterback." After some deliberation, Nunn decided to stick to baseball and work with a pitching coach over the summer. The difference was noticeable from the moment he stepped on the field his junior season. "I started throwing a lot harder as I grew into my body," Chris continued. "I progressed to the point where I sent in a video to Lipscomb [University], and since I was a lefty throwing 88-89 they offered me a spot right away." College would have to wait, as Nunn still had two years of high school to finish. As a senior he compiled a 6-1 record with a 1.21 ERA, wrapping up his prep career with aplomb.

From there it was on to Lipscomb in Nashville, where Nunn's development continued despite obstacles. "There was definitely a big learning curve," he reminisced when asked about the transition to college. "I'm an only child, so that showed a little bit when it came to keeping my room clean and stuff. I had to grow and mature, and it was a great learning opportunity for me. It definitely prepared me for life in professional baseball." After posting a 14.87 ERA his freshman year, Nunn started to dial in the following season. After an improved sophomore campaign and a successful summer in the prospect league, Chris returned to Lipscomb with a renewed confidence in his ability. Despite his previous success, he struggled with his command, walking over 20 batters in his first 20 innings that year. "My stuff was great, but I couldn't find the strike zone" he remembered. "I put a lot of pressure on myself. I had people telling me I could be a second or third rounder, and I didn't handle it very well. Without a doubt that affected my performance on the field." But that would change with one start midway through his junior season. "I went out against Campbell University and put up eight scoreless innings," Chris commented. "I just started throwing real well after that."

Nunn had been on the radar of big league scouts for a number of years, and that led to his eventual selection in the 24th round of the 2012 Draft by the San Diego Padres. He posted a 3-0 record and a 0.57 ERA in 24 games with the Eugene Emeralds, and he credits his success to a change in mindset. "I started to go out there to pitch as if it was the last time I'd ever play," Chris commented. "I just focused on throwing to the mitt, and everything started to click." He continued his success the following year in Fort Wayne, going 8-2 in 55 games out of the bullpen in his first full professional season.

His performance earned him a promotion to Lake Elsinore to start the 2014 campaign, and Nunn has continued to grow as a pitcher and as a person. "I've really been focused on improving my offspeed this year," he said. "I've definitely improved on getting ahead of hitters, since I've been prone to walking people my whole career. The control and command has been better, and my ability to throw offspeed in fastball counts has been better. I've learned that as the hitters get better you have to learn how to get people out in different ways. It's been a great learning experience, and I just focus on keeping my head on straight and having a short memory if things don't go my way."

Chris has been a crucial part of what has been the best pitching staff in the California League, tallying a 3-1 record to go with his 4.27 ERA through 38 appearances in what is known as a hitter-friendly league. But Nunn knows that success at this level is defined by more than just statistics. "The main thing for me is just staying on a level plane," he added. "If you do well, don't get too up because as soon as you do that the game will get you. I try to be a good teammate no matter what happens." As Chris Nunn continues to chase his dream, it's that attitude that will carry him far in life. He knows that the road is long, but if you do things right, good things will happen.