Hill moved to Mariners for Narvaez

Seattle picks up No. 24 Milwaukee prospect in deal for catcher 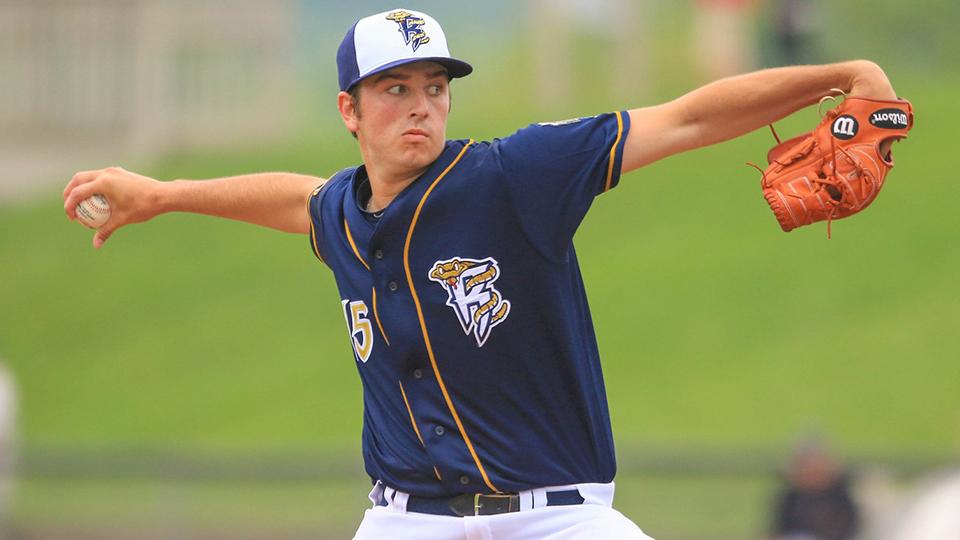 Opponents batted .253 against Adam Hill during his time with Class A Wisconsin in 2019. (Chris Mehring/Wisconsin Timber Rattlers)

Neither Adam Hill nor the Mariners are strangers to trades. Now they're paired together on the transactions page.

Seattle acquired the Brewers' No. 24 prospect, along with a competitive-balance Draft pick, in a deal that sent Major League catcher Omar Narvaez to Milwaukee on Thursday, both teams have confirmed. The pick moving to Seattle is currently slotted at No. 70 overall.

Catcher Omar Narváez has officially been acquired from Seattle in exchange for RHP Adam Hill and a 2020 Competitive Balance Round B selection. pic.twitter.com/qkJwyMe54K

Hill was a fourth-round pick by the Mets in the 2018 Draft out of the University of South Carolina. He was traded to the Brewers last January as part of a three-player return for outfielder Keon Broxton. Pitching in his first full season, the 22-year-old right-hander posted a 3.92 ERA and 1.38 WHIP with 109 strikeouts and 55 walks in 121 2/3 innings for Class A Wisconsin. He was named a Midwest League midseason All-Star, the first such honor of his young career.

Among Hill's assets is his size at 6-foot-6, which allows for good extension and can help his otherwise average low-90s fastball play up. His curveball and slider earn above-average grades, while his solid changeup gives him another option to keep hitters guessing.

As good as his extension can be, however, his delivery can also be inconsistent. In fact, his 10.7 percent walk rate was third-highest among Midwest League qualifiers in 2019. The size and pitch mix give him a chance to start in the Mariners system, but he'll need to improve his control to avoid a move to the bullpen the closer he gets to Seattle.

Narvaez joins the Brewers shortly after fellow catcher Yasmani Grandal departed in free agency by signing with the White Sox. The 27-year-old showed a promising bat in 2019 with a career-best 22 homers and .278/.353/.460 slash line over 132 games for the Mariners. However, his defense, specifically his framing, can be an issue. Narvaez was worth 1.8 WAR in 2019, according to FanGraphs. The Venezuela native enters arbitration for the first time this offseason and is under team control for three more years, making him an attractive option for the perennial contenders in Milwaukee.