D-backs' Thomas ready for next challenge

White Sox director of conditioning has trained son since infancy 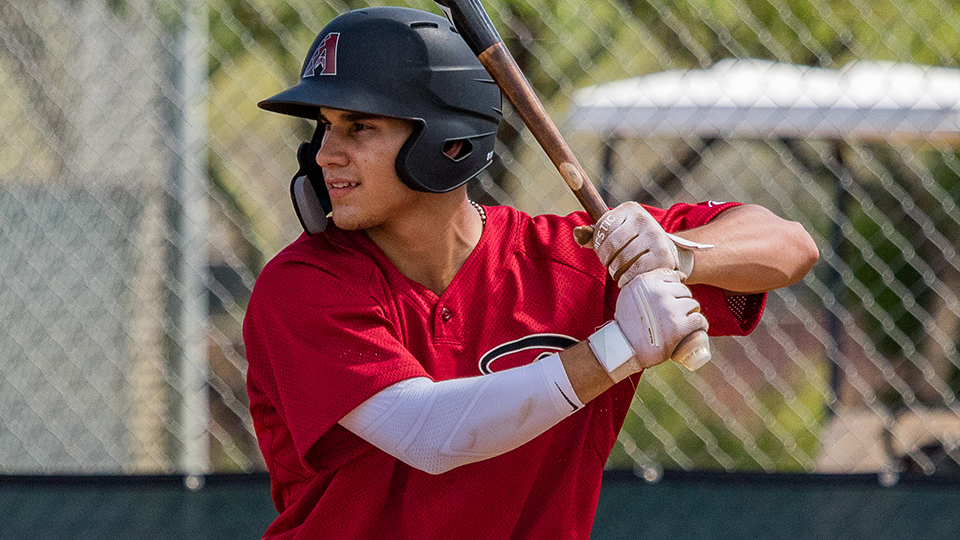 Of all the days he wasn't at the ballpark, Alek Thomas couldn't believe it.

July 23, 2009, was a typical summer day for the 9-year-old Thomas, now the D-backs' seventh-ranked prospect, except for the fact he didn't tag along with his father to work. Allen Thomas has been the White Sox director of strength and conditioning for nearly two decades, and bringing his son to the the field was practically a daily occurrence during the summer.

Except this day. Mark Buehrle was pitching. And no one had reached base against the crafty southpaw.

By the middle of the game, Alek asked his mother, Marcella, to take him to what was then called U.S. Cellular Field. The younger Thomas made it to the stadium in time to watch Dewayne Wise preserve Buehrle's perfect game with a miraculous catch in the ninth inning and joined the celebration in the clubhouse -- all without a ticket.

"We started at a really, really, really young age," Allen said. "I think that's something to note that people don't understand. He didn't just walk into the greatness or be a typical young kid who was a 1 percenter.

"We're not talking about crazy, mad scientist stuff, but we're talking about fun things. My whole idea was to [improve] his hand-eye coordination. But this was something he wanted to do hours a day."

While the Thomases occupied a condo and waited for their house to be built, Allen would always hear Alek bounding down the stairs in his diapers, climbing over the safeguards and occasionally hanging -- monkey bars style -- off the bannister.

For Alek, it helped to have a father whose job is to make world-class players better, but the genetic component also must exist. And Alek has that in spades. His father was a three-sport athlete [football, basketball, baseball] and Marcella played softball, among other sports. He followed in his father's footsteps, playing all three sports at a high level at Chicago's Mt. Carmel High School, but baseball always was the natural pull.

"Ever since I could remember being in the clubhouse with my dad and seeing all the guys," the brother of Josh and Alana said.

Some of the earliest drills he recalls completing are running with resistance bands, his father in tow as the anchor. He was mastering footwork on the ladder by the time he was 6. Then there were the one-handed drills in the cage, using a heavier bat.

He still performs all of those drills.

Proximity to players was constant throughout Alek's childhood. Allen realized how lucky he was to have Alek around him at the park. The White Sox were generous with all of their employees in that respect, but when batting practice rolled around, it was time for the kids to get off the field. That didn't apply to Alek by the time he was 6 or 7, though. He was shagging fly balls in the outfield with big leaguers and realized the best asset available to him was getting advice from Major Leaguers.

"It definitely was an advantage, having access to the weight room and all the players," Alek said. "Being able to go out on the field and shag fly balls, getting live reads with Major League players. I think the biggest thing was the learning.

Alek clubbed a home run with a wooden bat when he was 11 and weighed about 120 pounds, according to Allen. Now at Spring Training, at the age of 18, he was doing the usual -- tracking balls in the outfield during batting practice. With sunflower seeds in his right hand, Alek darted from right-center field to the opposite gap to make a leaping catch at the wall.

"That almost got him kicked off the field forever," Allen remembered. "I don't know if you'd say he was embarrassing the other outfielders, but it was clear at that time that kid was, for sure, capable of playing in the big leagues as a defender at that point."

The whole scene makes sense considering that Alek is a 60-grade fielder on the traditional scout's 20-to-80 scale.

Everything Allen did with Alek seemed to revolve around preparing for a Major League career, even when the younger Thomas watched games from the stands. Marcella didn't like this much, but it's a glimpse into how Allen also used sports psychology practices on Alek. As young as 8 or 9, Allen would have his son sit alone behind home plate in the family section. Unbeknownst to Alek, his dad had enlisted security guards to keep tabs on him, and the father-son duo had a series of hand signals worked out to make sure he was OK.

The reason? Allen wanted his son to experience the din of a crowd from a young age.

"He would sit there and watch the entire game and not move," Allen said. "And that's when I knew the noise -- you always talk about the noise, but I did so the noise wouldn't bother him. That's a huge, huge advantage when games are on the line."

Seeing dad on the big stage

Alek's earliest memories include the White Sox 2005 championship season, and it was the grind of the baseball season that attracted him as he grew up. That didn't stop him from committing to Texas Christian University on a football scholarship as a slot receiver. All along, however, he held out hope a Major League team would come calling early enough to make the decision easy for him.

Before last year's Draft, Alek met with representatives of more than 20 Major League clubs. Allen sat in on most of the discussions and when he couldn't, Alek filled him in on all of the details. The Draft process was unique for both father and son -- Alek actually experiencing it and Allen not having much knowledge of the scouting and development side. (Allen was a 45th-round pick of the White Sox in 1996 out of Wingate University and has been with the organization since.) With the 63rd overall pick, the D-backs selected Alek.

"I think we always had an idea that he'd be there," Allen said. "So the thought of that was nothing short of what we thought that was going to be."

Alek hit the ground running in the Arizona system. After 28 games in the Rookie-level Arizona League, he was promoted to Rookie Advanced Missoula. There, the 5-foot-11 outfielder batted .341/.396/.496 with two homers and 17 RBIs in 28 games. He made enough waves to earn an organizational All-Star nod.

Alek sees himself as a prospect with five-tool potential but is self-aware enough to know that all aspects of his game require improvement.

"I can go get the ball in the outfield. I can hit the ball to all fields with a little bit of pop. I can wreak havoc on the bases," he said. "I think one thing that I would say is not really a big weakness is my arm."

After a strong rookie campaign, Alek is preparing for his first full season in the Minors, which likely will come against better competition. Playing at a higher level hasn't stopped him before. In 2017, he was a member of the USA 18-U National Team and hit .361 with eight RBIs, six runs scored and five stolen bases in nine games.

Allen traveled to Arizona on Feb. 5 to prepare for Spring Training, and Alek followed three days later. In the weeks that followed, Alek joined his father on the White Sox back fields -- "He's still family, here," Allen said -- and participated in baserunning drills, tracked fly balls and did other drills prior to the D-backs opening their Minor League camp. With Alek totally focused on baseball as a career, instead of an after-school activity, Allen is expecting big things from his son.

"He's always been ahead of the game," Allen said. "It's never been an unknown he was going to be something special. I think he has a lot to show, but he's just coming out of the high school ranks."

With Alek at the D-backs' facility in Scottsdale and Allen with the White Sox in Glendale, the two have seen plenty of each other lately. They are not living together, though.

That doesn't mean they don't see each other, whether it be for dinner or some fun at a nearby Top Golf [Allen can launch it off the tee, per his son].

"It's good to know that he's here," Alek said. "If I need anything, I can always give him a call, or if I just want to hang out with him. Me and him are pretty much best friends."

That closeness didn't stop Alek from dialing up the intensity when he faced the Arizona League White Sox and Rookie Advanced Great Falls in the Pioneer League. And he hopes he'll eventually square off against his father's club on the big stage -- the one he's been around his entire life.

"I just know that one of these days I will be in the big leagues," Alek said. "Hopefully, my dad will be on the other side and [I'll] definitely try to beat him."