Signed by Cincy two months ago, righty allows a hit over eight 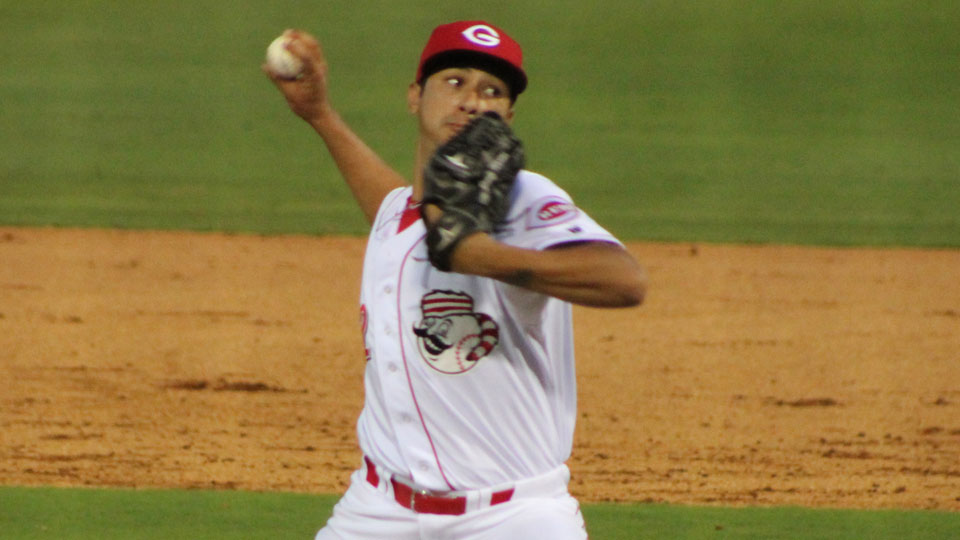 Randy Wynne tied the Fire Frogs' Philip Pfeifer for the most strikeouts in a single game this season. (Tracy Painter)

A little over two months ago, Randy Wynne wasn't in the Minor Leagues. But on Tuesday, he turned in one of the best performances of any professional pitcher this season.

Wynne struck out 17 batters while allowing just one hit over eight innings to lead Rookie Advanced Greeneville to a 2-0 win over Burlington at Burlington Athletic Stadium. The 17 punchouts matched the most in a single game this season. Florida's Philip Pfeifer also hit the mark on July 18.

It's been a long journey for the Cincinnati right-hander, who spent four-and-a-half seasons playing in the independent Frontier League and United Shore Professional Baseball League. This one stood out right away.

"That's definitely a career high," Wynne said. "I've had a couple other pretty good games in my life, some complete-game shutouts and stuff like that but not with that many strikeouts. I'm not usually a high strikeout guy. Today might've been the peak."

The 26-year-old was perfect in the first inning -- literally. He sat down the top of the Burlington order on strikes, dealing just three pitches in each at-bat. It was the third immaculate inning of the series, as Greeneville's Jose Salvador and Burlington's Drew Parrish each recorded one Sunday.

Wynne (3-2) saw the first inning developing that way, even if it took a little help from the other side.

"I couldn't help but smile a little bit," he said. "I knew after the eighth pitch what I was about to do. I was just trying to throw a strike. I actually dirted a curveball and the guy swung through it. I guess it was more luck than anything on that one."

The lone blemish of Wynne's outing came in the second, when he surrendered a two-out single to William Hancock up the middle. No one else reached base until the seventh, when Michael Massey got to first on a dropped third strike. That brought David Hollie to the plate.

Wynne's confidence did not waver.

"As soon as the guy got on first, my mind-set was, 'Well, job's not over. I've got more work to do,'" he said. "Getting that last one, that was just another part of the job."

And it was a job well done. Wynne got Hollie looking on just three pitches to end the inning for his fourth strikeout of the frame.

The Missouri Baptist product struck out two in the eighth. He fanned six of the final seven batters he faced, catching Raymond Lopez looking for No. 17. That marked the highest total of an Appalachian League hurler since David Francis rang up 16 for Danville on July 22, 2008.

Wynne didn't understand the full scope of what he had just accomplished until a little later.

After that set in, Wynne he was surprised again to be met by a flurry of congratulatory texts and messages from family and friends when he got to the clubhouse.

"I don't know how word got out so fast," he joked.

Although the San Diego native has only been in Greeneville for a couple months, the dominating performance had teammates playfully suggesting he might not be there much longer.

"They were making jokes about me starting in Cincinnati next game and stuff like that," Wynne said. "I don't know about any of that, but today felt pretty good."

Through 11 appearances in the Appalachian League, he sports a 2.98 ERA with 46 strikeouts over 45 1/3 innings. Those would be impressive numbers for anyone's rookie campaign, let alone a guy who wasn't sure he'd ever make it this far.