Hinojosa leads Shuckers back to Finals 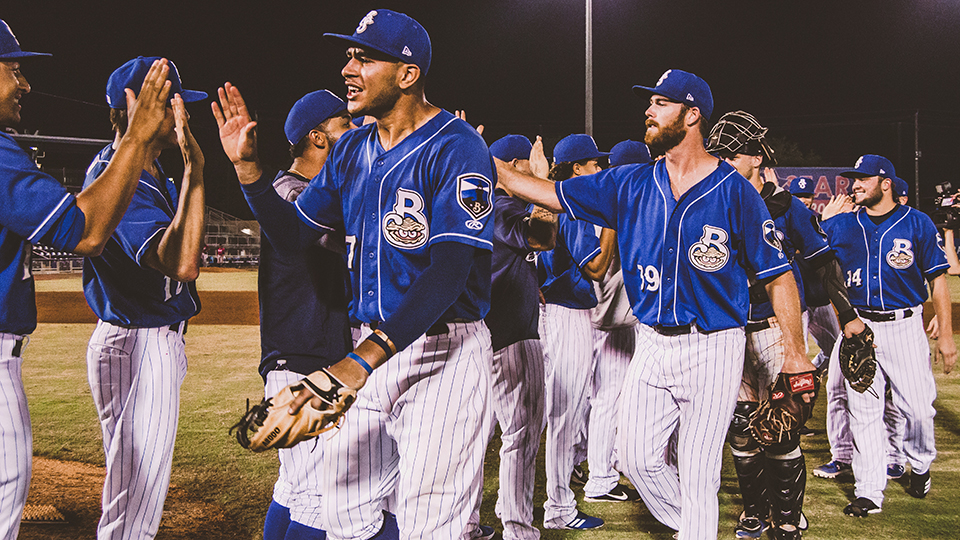 Biloxi will play for the Southern League championship for the third time in five years. (Katy Knauss/Biloxi Shuckers)

It's déjà vu all over again in the Southern League.

C.J. Hinojosa stroked a go-ahead two-run double in the bottom of the eighth inning and finished with four RBIs to lead Double-A Biloxi over Pensacola, 8-4, and into the Finals for the second straight season. The Shuckers trailed, 4-3, entering their half of the eighth but scored five times to win the decisive Game 5 on Sunday night at MGM Park.

Biloxi will look to exact revenge against Jackson, which advanced to its second straight Finals appearance and third in four years on Saturday.

A back-and-forth game reached its zenith in the eighth after 10th-ranked Minnesota prospect Ryan Jeffers gave the Blue Wahoos a one-run lead with his second homer in as many days. In the bottom of the frame, the Shuckers rallied off No. 18 prospect Stephen Gonsalves, loading the bases on a hit, a walk and a hit batter. Weston Wilson's sacrifice fly evened the score, 4-4, and Hinojosa laced an 0-2 offering down the left-field line to give the Shuckers the lead.

"I was just trying to find a good pitch," the Houston native said. "[I was] trying to find something to do some damage with and put a good swing on it."

Bruce Caldwell and Joantgel Segovia followed with run-scoring hits to give Biloxi a four-run edge.

Hinojosa's two-bagger followed his solo homer to left in the second that tied the score, 1-1, and his sixth-inning, game-tying sacrifice fly. The four RBIs were a season high for the 25-year-old, who hit .421 (8-for-19) with three doubles, two home runs and seven RBIs in the five-game series.

"It was a great series the entire way. It was a battle," Hinojosa said. "Our pitchers showed up and we just came in today and said, 'We're all going to lay it on the line,' and that's what we did. We gave it everything we had, and we're ready for the Championship Series."

His productive playoffs came on the heels of one of his best overall seasons in his first year in the Brewers' organization. Hinojosa batted .280/.338/.400 with 33 extra-base hits and 45 RBIs in 120 games.

Anthony Bender (1-0) recorded the final out in the eighth and worked around a walk and single in the ninth to close out the series. The right-hander racked up all four outs via strikeout.

Top Twins prospect Royce Lewis went 3-for-5 with a double to end the series with a .400/.478/.650 slash line in 20 at-bats. Second-ranked Alex Kirilloff singled in the ninth but was held without a homer for the first time in the series, and Jeffers finished a triple shy of the cycle.

Gonsalves (0-1) -- who appeared in eight regular-season games during an injury-plagued campaign -- did not retire a batter and was charged with three runs.

The Blue Wahoos were six outs away from reaching the Finals after falling into a 2-0 hole to start the series.

Biloxi hosts Jackson in Game 1 of the best-of-5 Finals on Tuesday.