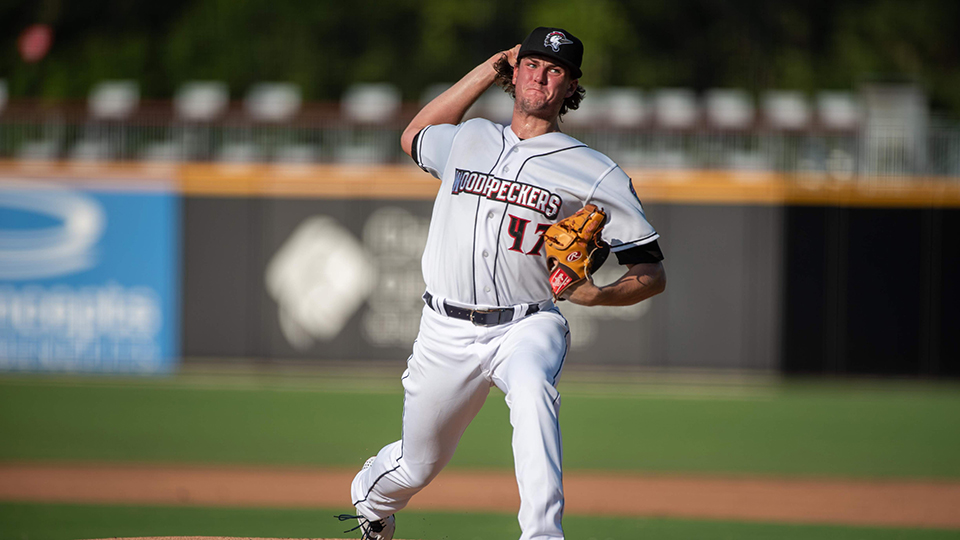 The nine strikeouts Forrest Whitley amassed were the most in any of his outings the past two years. (Joe Dwyer/Fayetteville Woodpeckers)

After dealing with injuries the past few years, Forrest Whitley reevaluated his delivery. And although it's taken some time for him to get a feel for it, he showed off the benefits of doing so with his most dominant outing in at least a year Tuesday.

Houston's second-ranked prospect allowed a hit and struck out nine over five innings to lead Class A Advanced Fayetteville to a 6-0 victory over Wilmington at Frawley Stadium. It marked his first scoreless outing since last Aug. 14 with Double-A Corpus Christi.

"Basically, I'm reinventing my mechanics. They're a lot different from what they were a couple of years ago, even last year," Whitley said. "It's definitely a bit of an adjustment throwing all the pitches in the zone, but I feel like it all kinda came together tonight. Even when I was out of the zone, I was able to quickly correct it."

The season got off to a tough start in the 17th overall pick in the 2016 Draft's first go-around at Triple-A Round Rock, where Whitley sported an 0-3 record and a 12.21 ERA in 24 1/3 innings before he landed on the injured list with shoulder fatigue on May 29.

The 21-year-old threw 4 1/3 frames in the Rookie-level Gulf Coast League before moving his rehab to the Carolina League on July 24. Whitley yielded two runs on three hits in 3 1/3 innings against Lynchburg, throwing 61 pitches, including 37 strikes.

But Tuesday's start looked decidedly more promising. MLB.com's No. 17 overall prospect amassed 39 strikes on 57 total pitches while facing one batter over the minimum. He never fell into a three-ball count.

Taking stock of the injuries and time on the injured list led to changes on the mound. Whitley said it's taken time to get used to his new motion, but he felt all five of his pitches were working in sync against the Blue Rocks. There was a learning curve with the new movement pattern, but there's now a comfort level on the mound he hasn't felt in quite some time.

"First it was the shoulder stuff, last year it was the oblique stuff," Whitley said. "It was a combination of things that ended up ultimately being a recipe for disaster at the beginning of this year. Not only not staying healthy, but not being able to make the right pitches. With the mechanical changes, it's a lot easier to be more efficient -- it's easier on my body."

Whitley (1-0) retired the first 10 batters of the game -- six via strikeout. He used a fastball-curveball combination the first time through the order, the first time he said he's only utilized two pitches through nine hitters. Blake Perkins broke the stretch by singling with one out in the fourth inning. But he was the only Blue Rocks player to reach against the righty, who set down the final five he faced.

"Once the lineup flipped, started throwing more changeups, sliders and cutter," he said. "It was just one of those nights where everything was working for me, command-wise. All five of my pitches were able to land and I could get it to the bottom of the zone when I needed to. It was a really good feeling to remember tonight going into my next outing."

Whitley capped his stint on a high note with back-to-back strikeouts of No. 15 Royals prospect Brewer Hicklen and ninth-ranked MJ Melendez.

The five frames matched his longest outing this year, which came during his first start for the Express against Nashville on April 9. While the 21-year-old realizes he might not be facing the same level of advanced hitters as in the Pacific Coast League, he won't take for granted his step in a positive direction.

The Texas native hasn't been given a specific timeline of when he'll head to Double-A or slot back into the Round Rock rotation. For now, Whitley is trying to find the consistency that can make him one of the most overpowering arms in the Minors.

"It felt good to get in and out of, that was my goal going into the night," he said. "[I was] trying to get off the mound as soon as possible, whether that be with a ground ball, flyout or strikeout -- preferably strikeout. These guys in Fayetteville have had a tough schedule the last few weeks, so I wanted these guys on the field for as short amount of time as possible."

Whitley saw limited action the past two seasons. Last year, he had a 50-game suspension to start the year for violating the Minor League Drug Prevention and Treatment Program. He was strong in his eight starts for Double-A Corpus Christi, striking out 34 in 26 1/3 innings. But lat and oblique injuries sidelined him for three separate stints.

With four pitches graded 60 or higher by MLB.com, Whitley has whiffed 253 batters in 174 1/3 innings as a professional. Through all of the ups and downs of the past 20 months or so, he has tried to keep a strong mind-set.

"I'm trying my best to stay stable up there mentally," the righty said. "I felt I've done a pretty good job with that, but now that I'm back pitching and completely healthy, it's pretty easy to forget about all the stuff that's happened earlier this season."

Cody Deason allowed one hit while fanning six over the final four frames to earn his first career save.