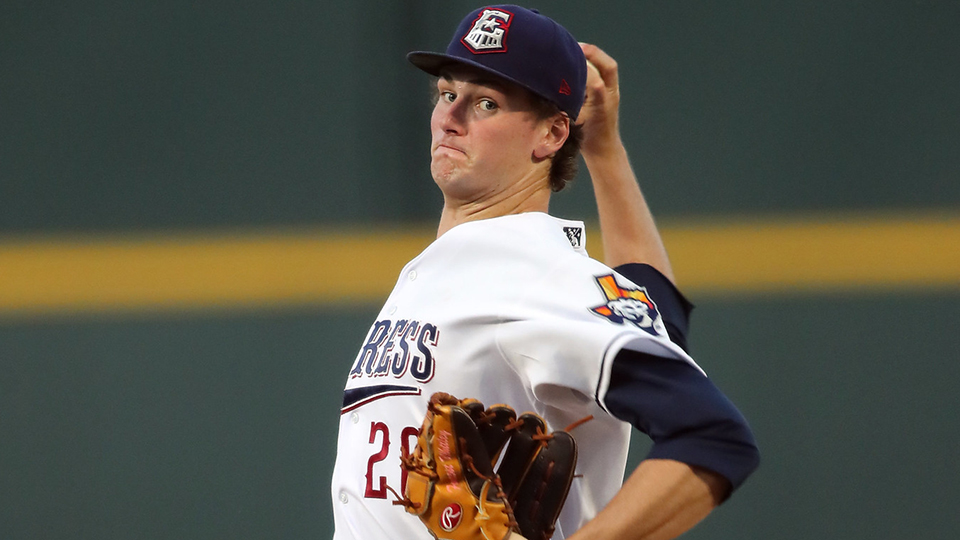 Forrest Whitley allowed at least four earned runs in each of his last five outings before this injury. (Jim Redman/MiLB.com)

The Astros' injury bug has now hit one of the most promising players in the Minor Leagues.

Top Houston prospect Forrest Whitley is headed to the Triple-A Round Rock injured list with shoulder fatigue and will rehab the injury in Florida, according to MLB.com's Brian McTaggart.

This news continues what has been a difficult season for the 21-year-old right-hander.

Ranked as the No. 9 overall prospect in the game by MLB.com, Whitley opened the season in Triple-A with sights set on potentially joining the Major League club this summer. Instead, he has struggled mightily in the Pacific Coast League. His 12.21 ERA over 24 1/3 innings is the highest among 1,282 Minor Leaguers with at least 20 frames this season. He has allowed nine homers in eight appearances with the Express, and opposing batters are hitting .343 against him. He struck out 29 and walked 15 over his 24 1/3 innings. Whitley last pitched on May 23, when he allowed a career-high seven earned runs on six hits and three walks in just two frames against San Antonio.

When he's on and healthy, the 2016 first-rounder has four plus to plus-plus pitches in his fastball, curveball, slider and changeup. He typically throws in the mid-90s with movement but can touch the high-90s and even triple digits at times.

Whitley has not eclipsed 100 innings in any of his first four Minor League seasons. He made only eight starts (26 1/3 innings) with Double-A Corpus Christi last season due to a drug-related suspension and oblique and lat injuries. He later added 26 innings in the Arizona Fall League, posting a 2.62 ERA and 0.96 WHIP with 36 strikeouts.

The Astros also announced Wednesday that shortstop Carlos Correa will miss four to six weeks with a cracked rib. He joins Jose Altuve, George Springer, Aledmys Diaz, Collin McHugh and Max Stassi as Houston players to hit the IL in May alone.