P-Nats transform to FredNats in advance of 2020 relocation 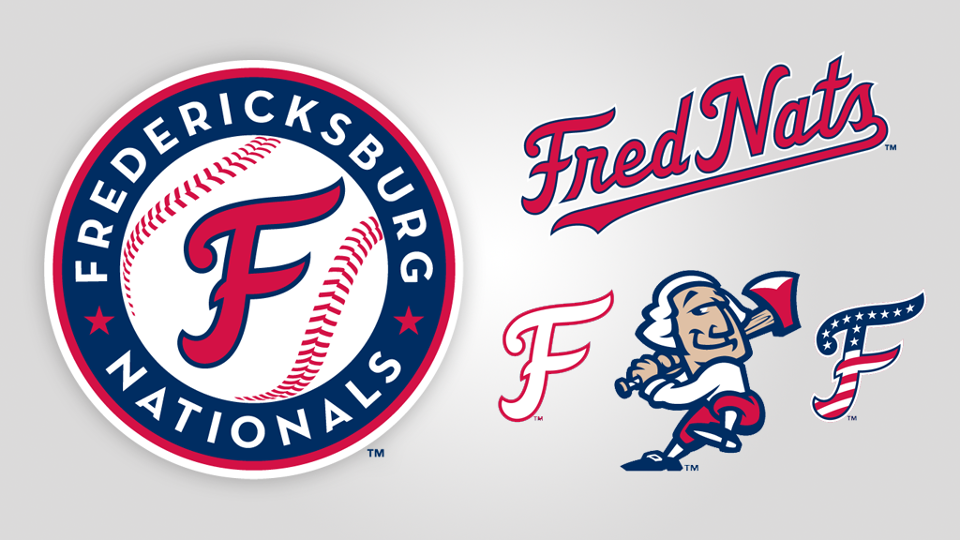 On Saturday, Oct. 5, Fredericksburg's new Carolina League team announced that it would be known as the Nationals.

In 2020, the city of Fredericksburg, Virginia, will host a Carolina League team. As of today, that team has a name. Please welcome the Fredericksburg Nationals.

Fredericksburg, located 54 miles south of Washington, D.C., will serve as the Class A Advanced affiliate of the Washington Nationals. When it came time to choose a name for this new Minor League Baseball entity, the proximity between parent club and affiliate could not be ignored.

"We're just an hour outside of D.C., and this affiliation means so much to the people here," said Fredericksburg Nationals executive vice president and general manager Nick Hall. "It's an opportunity to see the future stars of the team. And while you'd never wish injury on anyone, in the case of [Washington Nationals] rehab assignments, they can play in front of the fans of Fredericksburg and then go home and sleep in their own bed. It's a big deal."

Fredericksburg's "Nationals" moniker carries on the legacy of the franchise's previous iteration, the Potomac Nationals. That team, colloquially referred to as the P-Nats, operated out of Pfitzner Stadium in Woodbridge, Virginia. Saturday's name announcement was the focal point of a public event in downtown Fredericksburg that featured speeches from city dignitaries as well as members of the team's ownership and front office. This comes approximately six months after Fredericksburg's "Name the Team" contest, in which fans were invited to submit suggestions.

Pick up a FredNats cap »

The Nationals name, while a natural fit, was not a foregone conclusion.

"We thought about so many different names, because there were quite a few different submissions," said Hall, who joined the Fredericksburg front office after spending the 2019 season as the Amarillo Sod Poodles' director of partnerships. "But the catch was that over half of them was 'Nationals.' We wanted this to be Fredericksburg's team, and with over half of the submissions suggesting that name, it was a no-brainer for us to do that."

Teams with the same name as their parent organization have become somewhat of an endangered species on the Minor League Baseball landscape as clubs across the country have increasingly opted for unique (and often irreverent) standalone identities. In bucking this trend, Fredericksburg joins the likes of the Oklahoma City Dodgers, South Bend Cubs and Syracuse Mets. Fredericksburg's logos and overall branding -- created in conjunction with Dan Simon of Studio Simon -- have a variety of regionally specific elements. Similar to Potomac's "P-Nats" sobriquet, Fredericksburg is explicitly embracing the nickname of "FredNats."

"The FredNats element was probably the most important thing to the new branding," said Hall. "In the community of Fredericksburg, to work that name into our nickname was extremely important, and it just rolls off the tongue. We'll most likely be wearing jerseys that say 'FredNats,' and we'll have gear that says 'FredNats.' That's what people will call us across Minor League Baseball, across the country and here in Fredericksburg. We love that moniker."

Fredericksburg is further emphasized via a pair of alternate logos. One highlights the city's topography, while the other highlights its history. "We have a logo that features the downtown skyline," said Hall. "The iconic steeples and the bridge that define Fredericksburg. We think that will be popular from a local perspective. And then there's one of George Washington swinging the axe. George grew up here, and he stayed here until he went off and won us our independence. Up until that point, Fredericksburg had been his whole life. Chopping down that cherry tree happened right here in Fredericksburg. Swinging the bat as an axe is an homage to baseball and the roots of George Washington and his family being right here in Fredericksburg."

Saturday's name unveiling was a significant step in what will continue to be a very busy offseason in Fredericksburg. Upcoming (but as of now unscheduled) milestones include a uniform fashion show and a mascot unveiling. Meanwhile, construction continues apace on a 6,000-seat ballpark that is projected to open its doors in time for the FredNats' April 2020 home opener.

"Fredericksburg is a really great community, a smaller city within a really large market," said Hall. "There's been a lot of excitement, and I think we're going to have a very successful first season."