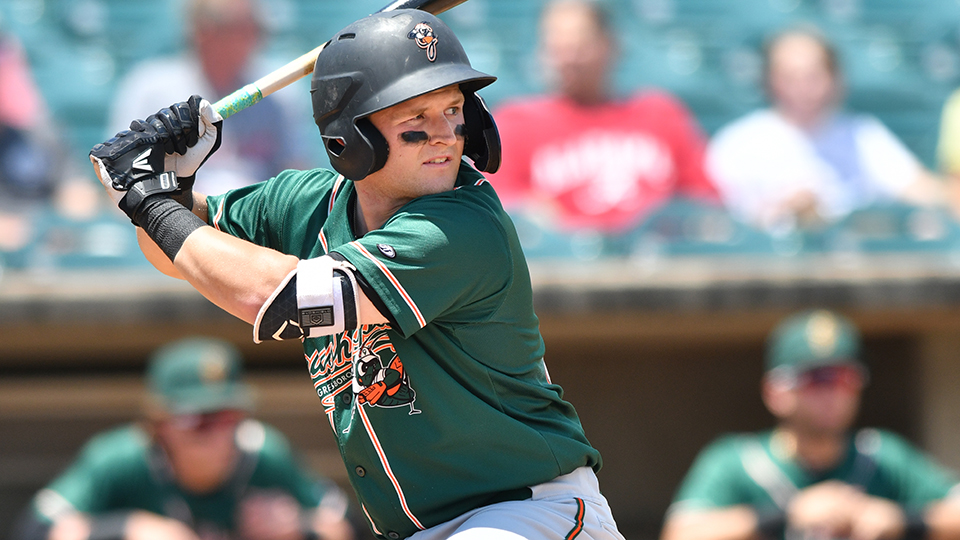 Grant Koch had not homered since hitting a solo shot on July 16 against Hagerstown. (Ken Inness/MiLB.com)

Grant Koch arrived at Appalachian Power Park on Friday night for his 92nd game this season. He carried a .193 average and four home runs with him, numbers he had posted in 326 at-bats. Past performance, though, does not dictate present production.

So, the Pirates catching prospect blasted three solo shots in Class A Greensboro's 11-1 romp over West Virginia. All three homers came on full counts. Two of them were charged to a pitcher named Martin -- but not the same one. It was the 45th hat trick in the Minor Leagues this year and the first by a Greensboro hitter since Scott Cousins pulled off the feat on Aug. 22, 2007.

"It's very crazy. It is," Koch said. "I don't think it's kind of set in. But it's one game. You come back tomorrow and do the best you can. But, yeah, this one was crazy."

Koch flied to center field in his first at-bat and passed on the first five pitches he saw from right-hander Matt Martin (1-1) in the fifth inning. He laced the payoff pitch over the wall in left-center field to put the Grasshoppers ahead, 3-0.

The 22-year-old swung at just one pitch before crushing another 3-2 offering for a leadoff dinger to left off right-hander Elias Espino in the seventh.

And in the eighth, he repeated his fifth-inning act by letting five pitches go by before completing the trifecta, this time at the expense of right-hander Reeves Martin and out to left.

"When it's 3-2, it's really not about the home runs or anything like that," Koch said. "It's just stay alive. Just try to get bat on ball and hit something hard. That's all I was trying to do. Because I know if I try to get too big and try to hit another one, that's when you don't hit it. That's when you strike out or try to do too much. That's where things go wrong."

Koch would know. He had not homered since July 16 against Hagerstown. His first full season -- at least offensively -- has not gone as planned. But he's treated it as a "learning experience."

Among the lessons have been staying healthy during a long summer. Koch has gained a better understanding of his body and when it needs extra stretching or can afford to go without the usual treatment. He hasn't spent a day on the injured list since being selected in the fifth round of last year's Draft, and only outfielder Fabricio Macias has appeared in more games for the Grasshoppers this year.

"That's a big positive this year, the fact that we were able to win games with me behind the plate," the catcher said. "As long as I'm affecting the game positively, whether it's offensively or defensively, then that's all I want to do."

His eyes were what contributed the most Friday night. It was just "one of those days" when he saw the ball, Koch said. When he was able to work his way into hitter's counts. When he didn't try to swing for the fences.

Yet three of his at-bats unfolded in nearly identical fashion and together produced a historic result. Really? There wasn't any strategy behind that? Baseball is weird.

"No," Koch insisted, "it was moreso just I hadn't found a pitch that I wanted to drive yet and I felt like I was seeing it well. Even the strikes that I took, I felt like they were good pitches on the corners or low, right on the bottom of the zone. For me, when two strikes come, you battle. You try to swing at those pitches. I was just fortunate enough to get those pitches a little bit elevated."

Jonah Davis also went deep for the Grasshoppers, leading off the game with his 19th roundtripper.

Noe Toribio (3-2) picked up the win, allowing one run on three hits over seven innings. The right-hander struck out six and did not walk a batter.