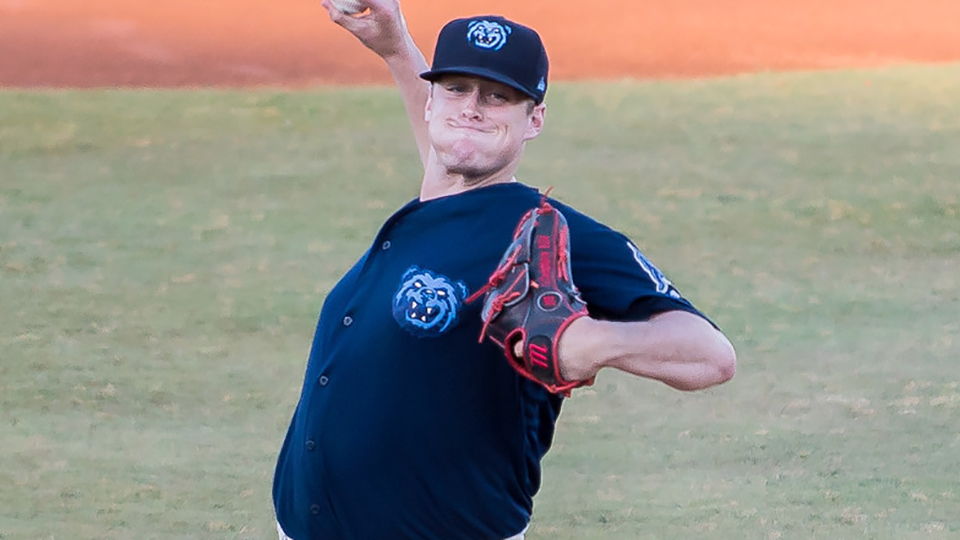 Grayson Long has been a midseason All-Star in the Midwest (2016) and Southern (2017) Leagues. (Mobile BayBears)

The non-waiver trade deadline may have been July 31, but Aug. 31 still had at least one big trade in store of its own.

The Angels sent No. 9 prospect Grayson Long and a player to be named later or cash to the Tigers for four-time All-Star outfielder Justin Upton, the teams have confirmed.

Tweet from @DetroitTigersPR: The Tigers today have acquired RHP Grayson Long and a PTBNL or cash considerations from LAA in exchange for OF Justin Upton. pic.twitter.com/Tc7N9eta2H

The deal is permitted because Upton had cleared waivers this past month, meaning any team could make a trade for him. The Aug. 31 date is important because players must be in an organization before the end of the day to be eligible for that Major League club's postseason roster.

From a prospect perspective, Long was the fourth-best pitching prospect in an improving Angels system before the deal. The 23-year-old right-hander was a third-round pick out of Texas A&M in 2015, but was limited to 65 innings across three levels last season. He's been healthier and much more effective in 2017 and is the Southern League leader with a 2.52 ERA over 121 2/3 innings for Double-A Mobile. He also ranked fifth on the circuit with a 1.13 WHIP and struck out 111 while walking 38 in his 23 starts.

The 6-foot-5, 230-pound hurler has the size of an effective starter. His slider was given the best grade by MLB.com at 55 on the 20-80 scale while his low-90's fastball and changeup were seen as average offerings. He's been dinged for his control in the past but made gains this season with a 7.8 percent walk rate, just better than the 9.2 percent average in the Southern League. That package likely makes him a No. 4 or 5 starter, if he reaches his ceiling.

Upton should boost the Angels' playoff chances down the stretch. Los Angeles sits one game behind the Twins for the final American League Wild Card spot and is two games behind the Yankees for the other Wild Card position. The club had a hole in left field, where its players ranked 20th among their peers with a collective 1.8 WAR according to FanGraphs. Upton, meanwhile, has produced a .279/.362/.542 line with 28 homers in 125 games for a Tigers team that owns a 58-74 record. His 4.1 WAR is fourth among Major League left fielders.

The 30-year-old slugger signed a six-year, $132.8 million deal with the Tigers before the 2016 season but could trigger an opt-out this winter, thus limiting Detroit's return in a trade.