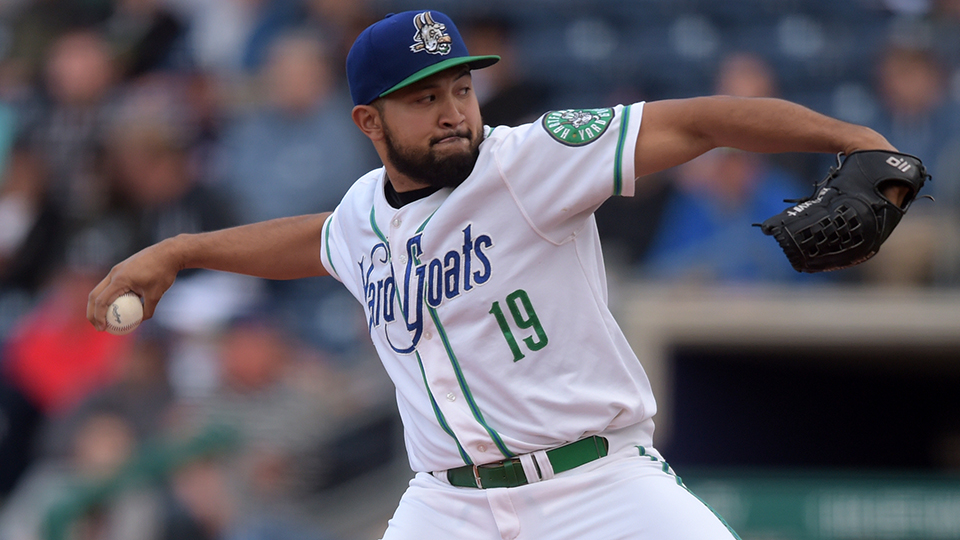 Rico Garcia completed six innings in a start for the fourth time this season. (Kevin Pataky/MiLB.com)

Colorado's No. 21 prospect fired six hitless innings and tied his career high with 11 strikeouts to fuel a near no-hitter in Double-A Hartford's 3-0 victory over Trenton at Dunkin' Donuts Park.

"My fastball command wasn't really there tonight, so I had to rely on my changeup," Garcia said. "I just trusted it. I didn't want to go away from my fastball at the same time, but I just had to keep mixing pitches. They're a good hitting team."

It was the second time this season the 2016 30th-round pick fanned 11 hitters. He credited a strong gameplan that he constructed with Yard Goats catcher Brian Serven and pitching coach Steve Merriman.

"I feel like I hit my spots when it mattered," Garcia said. "That's where my changeup came into play because I threw it mostly behind in counts. I think that kind of kept them off balance."

The only flaw in his outing came when center fielder Vance Vizcaino dropped a fly ball off the bat of Matt Lipka with two outs in the sixth inning. Lipka swiped third, but Garcia (7-1) fanned Hoy Jun Park to keep the no-hit bid intact. He threw 97 pitches -- 62 for strikes.

Garcia didn't notice the absence of baserunners until the fifth at the earliest, he said. But when Lipka stood 90 feet from home plate, The Hawaii Pacific product didn't let it affect his plan of attack.

"I didn't want to change my approach. I didn't want to get to big and say, 'Oh, this guy's not going to score,' and just change how I was pitching," he said. "I just had to stick with my approach regardless of where the runner was at."

Hartford's bullpen nearly finished off the no-hitter. Jordan Foley and Logan Cozart delivered perfect innings to bring the game into the ninth. Garcia watched intently from the dugout as his teammates tried to finish the feat.

"They did a great job," he said. "My defense, they made great plays. Just all-around, a great team win."

Closer Ben Bowden, on to convert his 18th save in 18 opportunities, retired the first batter of the ninth before Lipka came to the plate. The Yankees prospect pushed a bunt up the first-base side and beat out Bowden's throw to first to end the no-hitter.

Colorado's 16th-ranked prospect closed out the game, then he and several teammates had words with Lipka after the final out. That led to both teams needing to be separated on the infield.

But Garcia's effort wasn't dimmed. He dropped his season ERA to 1.92, which ranks fourth in the Eastern League. His 81 punchouts and seven wins top the Eastern League and he's third in opponents' batting average (.178) and tied for third in WHIP (0.90).

This year's has followed a blueprint from last season, when he made 26 starts between Class A Advanced Lancaster and Hartford. In 11 outings for the Yard Goats, the Honolulu, Hawaii, native went 6-2 with a 2.28 ERA.

"To be honest, I'm not really the kind of guy to expect a lot of things," Garcia said. "So I'll take it day by day. I'm just fortunate to be on a great team. ... It's all working out right now."

Going forward, his point of emphasis will be on improving his fastball command, which he felt was "at about 50 percent" Tuesday. To do so, he's concentrating on a few mechanical checkpoints during his side sessions between starts.

"Not coming forward too quick, that's when I tend to yank pitches or spike it arm-side," the 5-foot-11,190-pound hurler said. "Just stay over the rubber, stay strong on the back side."

Second-ranked Rockies prospect Colton Welker drilled his fifth homer of the year in the first. Bret Boswell and Mylz Jones also contributed solo shots to account for the rest of the Yard Goats' offense.