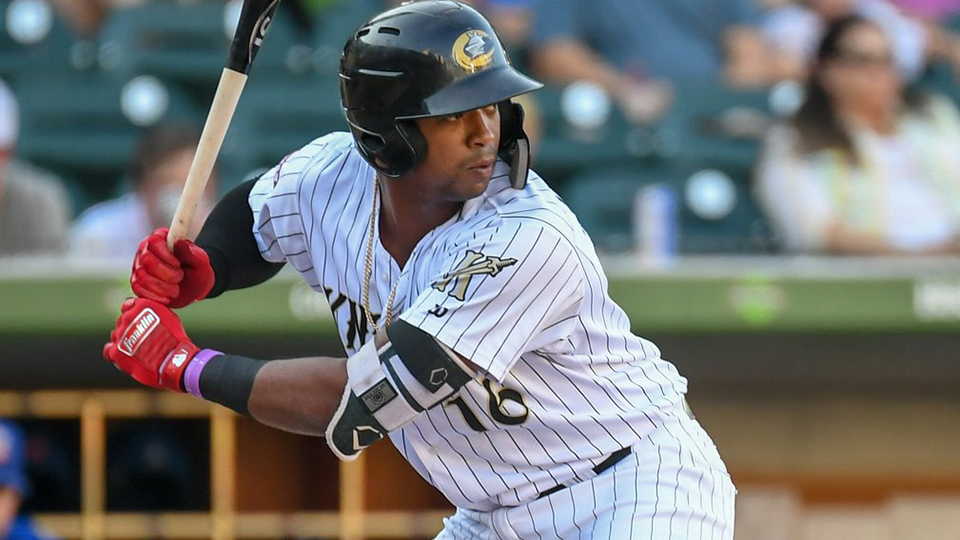 Eloy Jimenez would have led all Triple-A players with a .996 OPS if he had enough plate appearances to qualify. (Laura Wolff/Charlotte Knights)

The White Sox went all-in on a rebuild before the 2017 season when they traded ace Chris Sale to Boston for a package that included some of that organization's top prospects. The move, along with swapping other veteran pieces for young talent and high Draft picks, has set up the South Siders with one of baseball's strongest Minor League systems.

The White Sox boast seven of MLB.com's Top 100 prospects -- including Eloy Jimenez at No. 3 -- and just completed a season in which they ranked ninth with a .490 cumulative winning percentage (370-385). No affiliate had more standout prospects than Class A Advanced Winston-Salem, which finished a Carolina League-best 84-54 (.609 winning percentage) and sent five players to the All-Star Game. The organization had three teams qualify for the postseason, with Rookie-level Great Falls capturing the Pioneer League title.

Chicago also will have the third overall pick in the 2019 First-Year Player Draft.

Catcher -- Seby Zavala, Birmingham (56 games), Charlotte (48 games): As Zavala continues his ascent through the system, the 25-year-old makes his third straight appearance on this list. The 22nd-ranked White Sox prospect opened the 2018 campaign on a tear with Double-A Birmingham, posting a .271/.358/.472 slash line with 11 dingers, 31 RBIs and 32 runs scored in 56 games. He was named a Southern League midseason All-Star before getting called up to Triple-A Charlotte, where he collected 17 extra-base hits and drove in 20 runs in 48 games with the Knights. Defensively, Zavala committed two errors in 563 total chances.

"Seby possesses solid receiving skills, he's got a power bat and a very good hitting ability. Those are all the ingredients for a future Major League catcher," said White Sox director of player development Chis Getz. "He had a great season at Double-A and even got a taste of Charlotte this year."

First baseman -- Gavin Sheets, Winston-Salem (119 games): After a breakout rookie campaign, the 2017 second-round pick out of Wake Forest is an Organization All-Star for the second year in a row. Ranked 15th in the system, he had his smooth lefty swing on full display as his .293 batting average tied teammate Blake Rutherford for fourth-best in the Carolina League. The 22-year-old contributed 22 doubles among 36 extra-base hits and was fourth on the circuit with a .368 on-base percentage.

"He really put together a solid first full season," Getz said. "He brought a consistent bat in the middle of the lineup for Winston-Salem. He got on base a lot and really positioned himself well to open next season at Birmingham."

Second baseman -- Mitch Roman, Winston-Salem (90 games), Birmingham (27 games): The slick-fielding 23-year-old opened eyes in the organization with an impressive start to the season. After batting .293/.362/.377 with 18 extra-base hits, 41 RBIs and 47 runs scored in 90 games with Winston-Salem, Roman was promoted to the Southern League on Aug. 2. While his offensive numbers dipped slightly with the Barons, the Wright State product continued to shine defensively. In 100 games across the two levels, Roman posted a .975 fielding percentage.

"Mitch really showed a lot this season. He played all over the diamond, flashed some power and his consistent hitting ability," Getz said. "He ended the season with Double-A and will most likely start there next year."

Third baseman -- Ti'Quan Forbes, Winston-Salem (119 games): Acquired in August 2017 in the deal that sent right-hander Miguel Gonzalez to Texas, Forbes stood out in his first full season in the White Sox organization. The 22-year-old hit .273 with six triples and 21 doubles, driving in 51 runs and scoring 59 times in 119 games with the Dash. Selected by the Rangers in the second round of the 2014 Draft, he also went yard six times.

"It was nice to see Forbes' progress this year," Getz said. "He was able to get consistent at-bats, and he showed versatility in the infield. He also flashed some power that we didn't expect and showed how good of a hitter he could be."

Shortstop -- Laz Rivera, Kannapolis (63 games), Winston-Salem (61 games): Rivera climbed to 28th among White Sox prospects after breaking out in his first full season with the organization. The 24-year-old from Florida amassed a .346/.395/.502 slash line with 23 extra-base hits and 42 runs scored in 63 South Atlantic League games before moving up to Winston-Salem on June 21. In just his fourth game with the Dash, Rivera turned in a career night by going 5-for-5 with a pair of dingers and five runs scored in a record-setting 19-2 victory. Rivera also stole 17 bases in 27 tries for the season.

"Laz was a catalyst for both Kannapolis and Winston-Salem this year," Getz said. "We continue to challenge him and he continues to show us that he's a player. He's out in the Arizona Fall League working on things right now."

Eloy Jimenez, Birmingham (53 games), Charlotte (55 games): The top White Sox prospect appeared to be on a mission to make it to The Show this season, and although that did not happen, it in no way undercuts everything he accomplished in his quest. MLB.com's No. 3 overall prospect set a Southern League record with nine consecutive multi-hit games on his way to putting up a .317/.368/.556 line and midseason All-Star honors in 53 games with Birmingham. In 55 games following a promotion to Triple-A, the 21-year-old posted a .996 OPS, hitting .355 with 12 homers, 33 RBIs and 28 runs scored in 228 plate appearances. Only one player, Gwinnett's Michael Reed, sported a higher OPS (.997) in the International League, making Jimenez a slam dunk for his third straight Organization All-Star nod.

"He's done nothing but perform offensively since he got here," Getz said. "He can drive the ball to all fields and his approach at the plate is very advanced. We just want to make sure he's as well-rounded as possible before he gets to the Major League level, and that's very close."

Blake Rutherford, Winston-Salem (115 games): Rutherford was a key return for the White Sox in the 2017 trade that sent Todd Frazier, David Robertson and Tommy Kahnle to the Yankees, and the 21-year-old did not disappoint in his first full season in the Chicago system. The seventh-ranked White Sox prospect tied for the Carolina League lead with nine triples and ranked second with 78 RBIs and 131 hits. MLB.com's No. 77 overall prospect was fourth on the circuit with a .293 batting average and was named an end-of-season All-Star.

"He's one of our purest bats in the system," Getz said. "He was our most consistent hitter from a quality at-bats standpoint. He hit both righties and lefties well, showed gap power, and we believe that there's even more in there."

Luis Gonzalez, Kannapolis (55 games), Winston-Salem (62 games): After producing a .300 average with 69 hits in 55 games with Kannapolis, Gonzalez earned South Atlantic League midseason All-Star honors and a June 21 promotion to the Carolina League. The 23-year-old from Mexico was even better at the higher level, batting .313/.376/.504 with 33 extra-base hits, 45 RBIs and 50 runs scored. He also showed versatility in the field as he played all three outfield positions and committed only six errors in 502 total chances.

"Luis is just a very natural hitter," Getz said. "He put together a great year. He showed us great instincts in the box and was solid defensively. He's a baseball player that continues to move his way up the ladder."

Utility -- Tate Blackman, Kannapolis (129 games): Blackman appeared in 85 games at second base and 38 at third for Kannapolis and posted a .949 fielding percentage. The 13th-round selection in last year's Draft turned in a solid debut performance with Rookie-level Great Falls before opening this year in the South Atlantic League, where he hit .244/.344/.407 with 17 long balls, 18 doubles, 65 RBIs and 67 runs scored. The 24-year-old tied for first on the circuit with 62 walks and was named a midseason All-Star.

"Tate split time between second and third base and showed he could handle both positions well," Getz said. "At the plate, he came on strong early in the year, and his power was obvious in his first full season. We look forward to 2019 with him."

Right-handed starting pitcher -- Dylan Cease, Winston-Salem (13 starts), Birmingham (10 starts): MLB.com's No. 25 overall prospect put it all together in his fourth professional season. The 22-year-old dominated the Carolina League to start the year as he went 9-2 with a 2.89 ERA and 82 strikeouts over 71 2/3 innings in 13 starts. Those numbers earned him a midseason promotion to Double-A Birmingham, where he found another gear. Cease went unbeaten in 10 starts for the Barons and posted a 0.99 WHIP and 1.72 ERA. The 22-year-old fanned 78 over 52 1/3 frames and compiled a 24-inning scoreless streak that spanned into his eighth Southern League appearance. Cease also appeared in the Futures Game in Washington, D.C.

"Dylan has four plus-pitches, and what really helped him this year was his ability to repeat his delivery," Getz said. "Physically, our goal was to get him healthy enough to give us a season's worth of innings, and he not only went beyond expectations with that but also performed at an elite level. With his four offerings, he's a future front-end starter."

Left-handed starting pitcher -- Bernardo Flores, Winston-Salem (12 starts), Birmingham (13 starts): Flores is making his second straight Organization All-Star appearance after enjoying another career year. The 23-year-old set personal bests with a 2.65 ERA, 105 strikeouts, a 1.19 WHIP and 156 innings pitched while taking home some hardware. The 2016 seventh-round pick out of USC posted a 1.000 fielding percentage in 25 starts across two levels to win the 2018 Rawlings Gold Glove Award as the Minors' best defensive hurler.

"Bernardo really took a step forward this year in the eyes of the organization," Getz said. "He showed more life on his fastball, sharpened his breaking pitches and fine-tuned his always-solid changeup. He's very good at holding runners on, and as you probably know from the award he just won, he's an excellent fielder."

Relief pitcher -- Tyler Johnson, Kannapolis (20 games), Winston-Salem (21 games): After an impressive professional debut in 2017, Johnson set career highs in every category this season. The 23-year-old right-hander had a 1.40 ERA, 0.88 WHIP and 89 strikeouts against 16 walks over 58 innings in 41 games between Kannapolis and Winston-Salem. He held opponents to a .172 average, allowed more than one earned run in a game only twice and recorded 14 saves in 15 chances.

"He's one of the best relievers in our entire system," Getz said. "He's got a plus-fastball and an improving breaking pitch that he made big strides with this year. He also showed a solid changeup, and with his stuff he has the ability to be a future back-end reliever."