Legends walk off with another SAL title

On Friday the 13th, Rohlman wins it with two-run shot in 13th 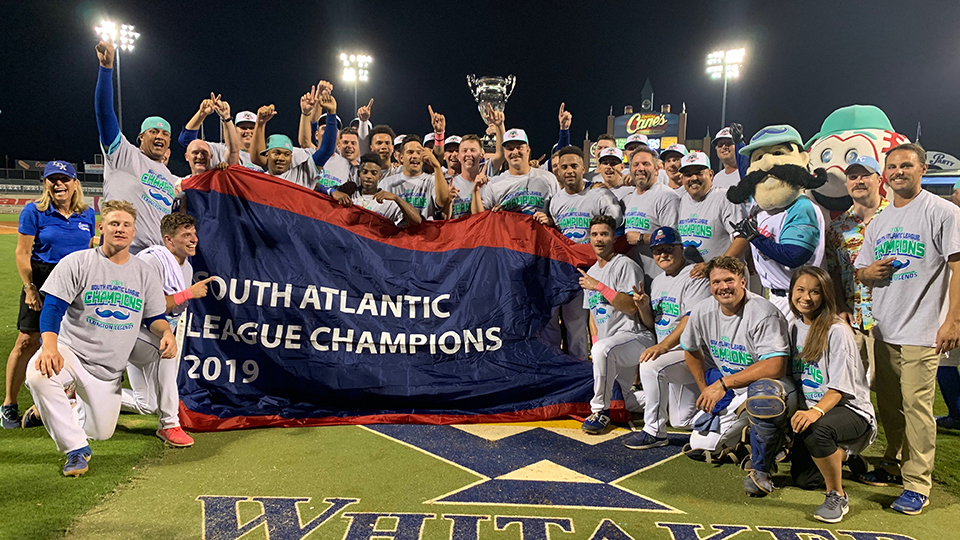 The 13th inning on Friday the 13th is when Lexington became legendary.

As the ball floated through the night and over the fence for Rohlman's first long ball in 35 games since July 26, only one word crossed the mind of Lexington manager Brook Conrad: elation.

"That game just completely epitomizes our whole season, these guys not giving up the entire season," he said. "They fought their hearts out until the last out of every game. This game going so long, the ups and the downs, both teams playing so hard, it was just an outstanding feeling."

Eric Cole led off the 13th by drawing a four-pitch walk. Chris Hudgins struck out and Nathan Eaton flied out before Rohlman delivered the biggest hit of his life, sending a 1-2 pitch from Tyree Thompson -- in his fourth inning of relief -- over the right field fence. Teammates mobbed him at home plate, ripped off his jersey and doused him with Gatorade.

Conrad and Rohlman first bonded during the 2017 season, when the skipper was a first-year coach in the Royals organization and Rohlman was a 35th-round pick in that year's Draft playing for Rookie Advanced Burlington.

"He's just such a standup, character guy. I was so proud of him and happy that he was the guy that did it," Conrad said. "Throughout the course of these playoffs, we had different guys each night step up and get big hits."

Before the celebration, the Legends were propelled by six no-hit innings from starter Zach Haake. The sixth-round pick in last year's Draft fanned six and walked two, throwing 51 of 82 pitches for strikes.

While Haake (pronounced "hockey") stymied the Crawdads, Hickory starter Jesus Linarez was on the attack against the Legends lineup. The right-hander yielded one hit before Rohlman and Nick Hutchins reached on a single and an error, respectively, with one out in the fifth. Linarez got the hook and Hever Bueno escaped a bases-loaded jam to keep the game scoreless.

That changed in the sixth, when a trio of singles -- the last one by Eaton -- produced the Legends' first run.

Haake wanted to keep his no-hit bid going, but his manager saw little use in pushing him.Daniel James came out of the bullpen for the seventh, but he lost the no-hitter and shutout on a two-out solo homer to Pedro Gonzalez.

"If you had told me then it was going to go that much longer," Conrad said, "I wouldn't have believed you."

The Legends squandered a bases-loaded opportunity in the bottom half of the inning and could not get a man home from second with one out in the 10th.

"[The game] just kept going and going," Conrad said. "You really got to tip your cap to the other side. Hickory was an incredible team all season. They had to fight to get in during the second half. We knew it wasn't going to be easy."

Brandon Marklund was lights-out following James out of the bullpen. The righty tossed four one-hit innings with three strikeouts and a hit batter, who he erased with an inning-ending double play in the 11th. Tyler Gray recorded a 1-2-3 12th and struck out three around a walk in the 13th.

"I can't say enough about how our pitching was throughout the series -- absolutely incredible, keeping us in every single game," Conrad said. "Over the course of these playoffs and the end of the first half, it was pitching and timely hitting. That's how we got it done.

"Our bullpen, too, this postseason was lights-out. Guys down the stretch pitched really good for us."

In the 12th, Gonzalez came up clutch again, this time in the field. The Crawdads right fielder tracked down Jeison Guzman's drive to the warning track and collided with the tall wall, sending the game to the 13th.

Rohlman's blast backed up the effort of the pitching staff and put an emphatic end to the SAL season. The Legends are the league's first back-to-back champions since Lakewood accomplished the feat in 2009-10.

"It's really exciting," Conrad said. "It just goes to show you what a great job our scouting and development have done over the course of the last few years, putting together good Draft after good Draft of talent and high-character individuals who just love to compete."

Tyreque Reed, Hickory's Game 3 hero, reached base twice with a single and a walk.