Pacific Coast League legend O'Doul gets his due 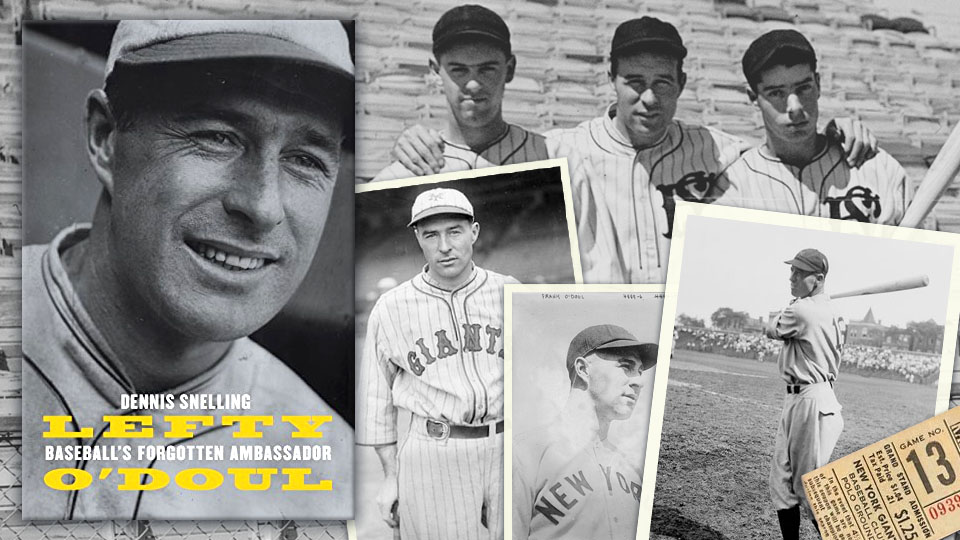 Over the course of 40-plus years in professional baseball, Lefty O'Doul pretty much did it all. The gregarious San Franciscan was a pitcher, an outfielder, a manager, a hitting coach and -- in essence -- an American diplomat to Japan.

And yet, according to the title of Dennis Snelling's biography, O'Doul has been "forgotten."

Lefty O'Doul: Baseball's Forgotten Ambassador, published earlier this year, is an admirable attempt to elevate O'Doul's place among baseball's pantheon of greats. Over the course of 16 chapters and approximately 300 pages (not including notes), Snelling provides a thoroughly researched, sprawling and lovingly written account of O'Doul's big-hearted life and times. If you weren't a fan of O'Doul going into the book, you likely will be afterward.

"He was charismatic," Snelling wrote. "Quick to laugh and smile, and slow to take offense, O'Doul had an ingratiating personality that served him well."

O'Doul's Major League career seems hard to categorize. He played 11 seasons for seven teams over a 16-year span, achieving the most success after converting from a pitcher to full-time outfielder while in his late 20s. Snelling observes how O'Doul became "an overnight sensation at the age of 32," hitting .398 with a then-record 254 hits as a member of the 1929 Philadelphia Phillies. Three years later, he again led the National League in batting average, compiling a .368 mark as a member of the Brooklyn Robins. During this period of sustained success, O'Doul developed a reputation as one of baseball's most "scientific" hitters. Certainly, he was ahead of his time.

"He jotted down notes on every pitcher he faced, and continually adapted his approach depending on who he was facing. ... Whenever he could, O'Doul reviewed films of his hitting, and he constantly studied hitters and situations," wrote Snelling, going on to note that O'Doul's cerebral approach was combined with a super-sized dose of good old-fashioned superstition.

O'Doul certainly made a name for himself in Major League Baseball. But he had the biggest impact in the Pacific Coast League, and in particular, the circuit's San Francisco Seals. Snelling's biography, then, is a logical extension of his previous work, a PCL history published in 2012 entitled The Greatest Minor League. O'Doul figured prominently throughout that book, garnering more ink than any other individual, but clearly Snelling had far more to say about one of Minor League Baseball's most important 20th-century figures.

He began and ended his playing career with the Seals, and then went on to pilot the club for 15 seasons as their so-called "manager for life." The PCL was then considered to be nearly on par with Major League Baseball, at a time when "The Show" didn't have a presence west of the Mississippi River. In addition to San Francisco, O'Doul logged time as a player with Salt Lake City and Hollywood and managed in the PCL locales of San Diego, Oakland, Vancouver and Seattle.

O'Doul's popularity within his native San Francisco proved to be a recurring theme of the book; he was very much an individual with a "a stranger's just a friend you haven't met" disposition. Snelling wrote throughout about the various iterations of the Seals' "Lefty O'Doul Day" promotions, in which the man of the hour would throw baseballs into the crowd and sign autographs for hours upon hours after the game. Young fans loved him, and he loved them back.

But O'Doul was just as popular in Japan as he was in San Francisco, thanks to his frequent trips to the baseball-obsessed country. Truly, he was an ambassador. He first made the journey as part of a 1931 barnstorming tour, as part of what Snelling calls "by far the best collection of talent ever to visit the country." O'Doul, immediately smitten with the country and its people, played a key role in bringing Babe Ruth to Japan three years later. After that trip, Snelling writes that O'Doul remained "certain that baseball could serve as a bridge to better relations between America and Japan."

The bombing of Pearl Harbor and America's subsequent entry into World War II effectively destroyed that bridge. The common language of baseball was lost amid the carnage of war, and O'Doul didn't conceal his contempt for Japan's slide into militarism. But he never lost his ability to discern between a government and its people, and in 1949, O'Doul brought the Seals to Japan at the behest of General Douglas MacArthur. Snelling considers this trip to be O'Doul's finest moment, and treats it accordingly. Each chapter of Lefty O'Doul begins with a vignette related to the 1949 trip, before picking up chronologically where the previous chapter left off.

O'Doul was an open book, friendly with fans and the media, and one really gets a sense of his personality by reading Snelling's biography. That said, there is very little material related to his life away from the baseball diamond. O'Doul's wife, Abbie, is rarely mentioned at all. The couple's divorce (and O'Doul's subsequent remarriage) is given a four-paragraph account, before attention is diverted back to a recounting of his 1953 managerial and ambassadorial efforts. If there were other sides to O'Doul that differed from the public persona, Snelling was unable to find them. But given his book's rigor and overall attention to detail, they don't seem to be purposeful omissions.

What is Lefty O'Doul's legacy? Snelling wrote that is "far from simple to measure," but includes batting skills and teaching ability, philanthropy and being "a champion for kids and baseball worldwide." As such, "he was, and is, a San Francisco icon."

And as this book makes clear, he hasn't been forgotten.