Nido, Guillorme, Thompson together once more as AFL teammates 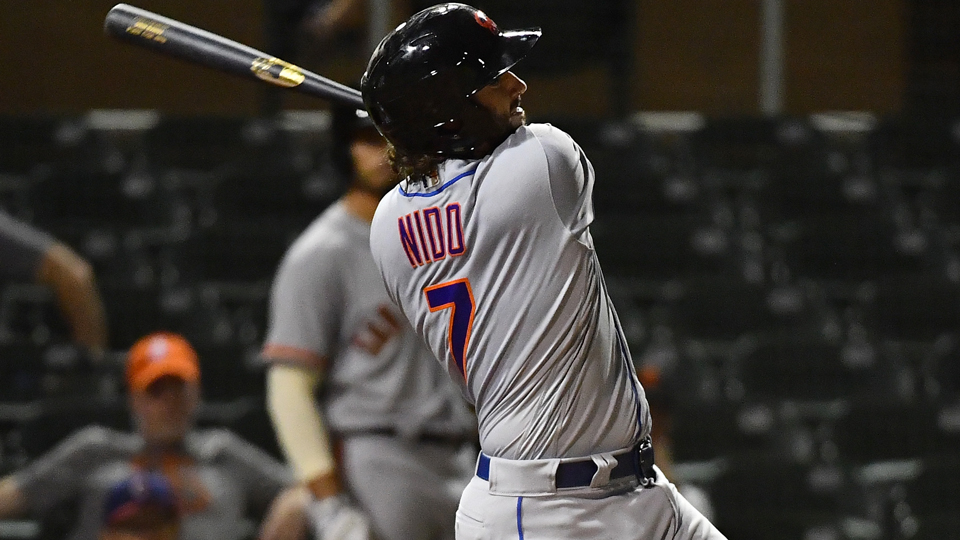 SCOTTSDALE, Arizona -- In most cases, the Arizona Fall League is about mixing things up. It's the place where a prized catching prospect can get some reps at third base, or a pitcher can test a new arm slot or experiment with different grips against some of the Minors' best hitters. It's where early-round Draft picks and vaunted international signees from five organizations and three levels play together on one team.

Familiarity, then, is not one of the AFL's hallmarks.

But three top Mets prospects -- Tomas Nido (No. 9), Luis Guillorme (No. 11) and David Thompson (No. 24) -- are familiar to one another indeed. After playing together for large swaths of the last two seasons, the trio has made up the bulk of the Scorpions infield during a few games this autumn.

"It's a lot of fun to be playing with guys you've played with the whole year," said Guillorme, a shortstop and second baseman. "You kind of know each other at this point, so you know what he's going to do before he does it, and he knows what I'm going to do. That's always fun. It makes it a lot easier."

In that sense, Scottsdale may have an advantage during games in which Nido is catching, Guillorme is manning the middle infield and Thompson is at third. The second time it ever happened, on Oct. 23, Nido and Guillorme nabbed Tigers prospect Cam Gibson -- the first of two Solar Sox runners Nido would throw out in the inning -- trying to steal second base.

"He definitely makes it routine," Nido said of Guillorme. "[It gives you confidence] to look up and see him there. It doesn't matter who is [at second base] -- I still have to do the job, but it definitely helps when he's there."

The feeling is mutual between the pair, who will represent the Scorpions on the East team in Saturday's Fall Stars Game.

"Me and Nido, we know what we want to do," the 23-year-old Florida native said. "At this point, I trust him to just throw and he trusts me to just let it go and let me catch it. Same thing with Thompson. He knows all he's got to do is get rid of the ball and let me deal with the rest."

Both from the Miami area, Thompson and Guillorme played against one another in high school and travel ball.

"It's a lot of fun to be on the same side. He's a great player, so it's always fun to watch the plays he makes out there," Thompson said. "He's just a guy you want on your team. If you're playing against him ... I didn't really like him too much, because he's a bulldog out there. He makes a lot of good plays and puts together great at-bats."

Defensive gems are Guillorme's calling card. His slick fielding has led the way as he's climbed from a 10th-round pick out of high school in 2013 to a solid full season at Double-A Binghamton last year. (He garnered national attention by plucking a flying bat from the air during Spring Training.)

But the hitting may soon catch up. After batting .263 with a .332 on-base percentage in the Class A Advanced Florida State League last year, he jumped a level and hit 20 points higher while getting on at a .331 clip. Not only that, but Guillorme collected a career-high 20 doubles in the Eastern League. He insists there's much more work to be done.

"I would never say I'm satisfied. You're never satisfied with what you do," he said. "You might give yourself a goal, but you always try to exceed it. There's always room for improvement."

In fact, a large part of his focus in the AFL is on adding extra-base potential to his swing.

"I'm just trying to drive the ball a little better. I'm thinking more of doubles and triples than home runs, because that's my game," he said. "My game is trying to figure out a way to get to second base, whether it's a double, whether it's a single and steal a bag or something, that's my job. My job is to create runs for the team or for other people."

Nido and Thompson might well be those other people. They combined for 24 homers and 128 RBIs with the Rumble Ponies this year, and each intends to keep improving at the dish over the course of the AFL. Nido, who was the National League winner of the circuit's Bowman Hitting Challenge, is working on his stance and has connected on five extra-base knocks through his first nine games.

"Hitting-wise, the leg kick, [I'm] just trying to get the timing down and work on that [with this] new batting stance," he said. The biggest adjustment with the the kick, he added, is "trying to get the timing, whether to start too early or too late, or just kind of get that in between. It's a work in progress, and that's what I'm here for. Just got to keep working on it."

For Thompson, "I'm trying to work on every part of my game," he said.

"It's great to have coaches like [the Yankees' Jay Bell] and [the Reds' Gookie Dawkins] to work with. I've got a good routine going with 'Gook' in the cages, and working with infielders, and to me it's more fun working with [the Yankees' Kyle Holder] and Guillorme and [the Yankees' Thairo Estrada]. They're all just great defenders, so it's really fun to compete with those guys."

The University of Miami product has one more concrete goal for the AFL.

"I'm just a little upset at Nido, because he's my roommate and we're real good friends, and I'm not even in his wedding next month," he said. "I've got to go and sit in the balcony up there. I'm trying to be a good roommate so he'll put me in the wedding. I'm trying my best."

"He'll be there regardless. I don't think anything's changing, but we can give him a title if he wants," the backstop said. "He's doing pretty good, but he knows where he's at. Just as much as the guys who are my groomsmen, same thing. He's there. It's just as important, and he knows it."