No. 13 prospect fans 18 over 12 innings for Class A Charleston 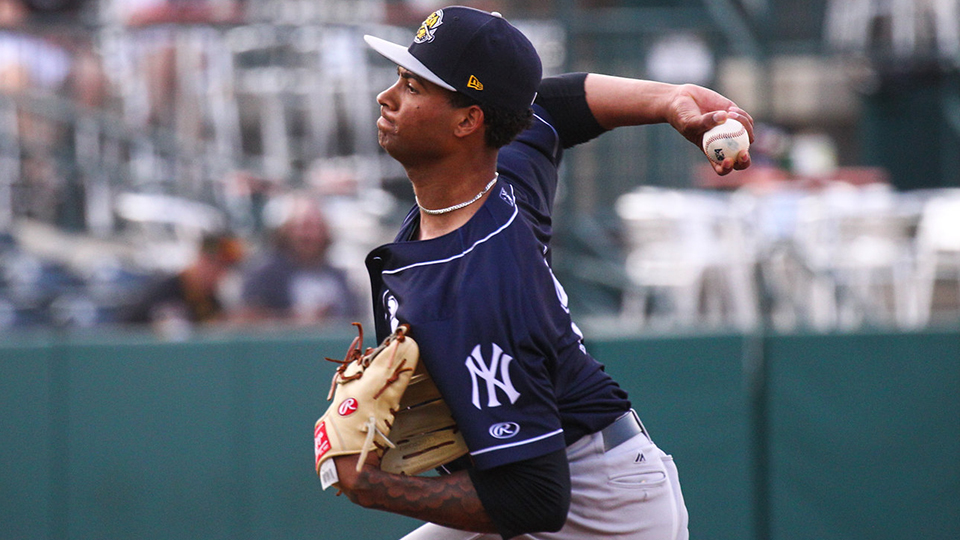 Luis Gil has struck out 32.5 percent of the batters he has faced through 12 starts this season. (Chris Baird/MiLB.com)

Despite entering the Minors in 2015, Luis Gil had yet to play for a Class A club before opening 2019 with Charleston, due to his raw profile following shoulder surgery that caused him to miss all of 2016. Through the first half of the season, he has arguably become the level's most dominant pitcher.

The Yankees' No. 13 prospect has been named the South Atlantic League Pitcher of the Week after striking out 18 and allowing one earned run on 11 hits and three walks over 12 innings in a pair of starts for the RiverDogs between June 10-16. This is Gil's first career Pitcher of the Week award since signing with the Twins out of the Dominican Republic in February 2015.

"He's been pitching with a lot of conviction," said Charleston pitching coach Gabe Luckert. "After the first month or so, we did a lot of work on his delivery and nailing down the consistency of his command. Once he had the security of the command of his fastball down, you could see him take on more of a mound presence, and he's become something to watch."

The better of the 21-year-old right-hander's two outings came last Monday at Rome, when he set career highs with 10 strikeouts over seven scoreless innings in a 1-0, 10-inning loss. It was one of his most efficient outings of the season -- he needed only 86 pitches (60 of which were strikes) to get through the seven frames, trumping his previous career best of six innings last reached on May 16 against West Virginia.

Gil continued to get whiffs in his second outing of the week, fanning eight while allowing one earned run on eight hits over five innings Sunday in a 2-1 win over Greenville. It was the sixth time in 12 starts this season that Gil fanned at least eight batters.

The 6-foot-3 hurler has always stood out for his ability to get swings and misses, thanks to a 70-grade fastball that Luckert says has been 94-99 mph for most of the season. His curveball can also be a plus pitch but needs development as does his changeup, which Luckert says was non-existent at the beginning of the season.

"It mostly comes to the curveball quality," Luckert said of Gil's high K rates of late. "Once he started being able to spin it more in the zone, hitters really had something else to think about and were put in a tough situation. Once we added back the changeup, it's been a little unfair at times. At this level, he's definitely going to get some strikeouts when he can work in all three."

Following his award-winning week, Gil leads the 72 qualified Class A pitchers with a 1.81 ERA and 32.5 percent strikeout rate. His 81 strikeouts over 59 2/3 innings are tied for third-most at the level.

The biggest driver of the 6-foot-3 hurler's success is the continued improvement of his control. As good as Gil's stuff has been, he's struggled to find the zone with regularity. He walked 31 batters in 46 innings between Rookie Advanced Pulaski and Class A Short Season Staten Island last year, and as Gil entered full-season ball for the first time, the Yankees knew he would have to improve his control if he had any chance of sticking as a starter.

"His hand separation has been where we've focused," Luckert said. "His timing was off when that wasn't right, and we wanted to get him to the point where his arm path was following all the way through the pitch. ... We recognized it as soon as we got to Spring Training and knew he'd be breaking camp with us. We touched base then and have been emphasizing it as our main objective since then."

As rosy as Gil's numbers have been, he is far from a finished product -- the changeup still needs work and Gil needs to maintain his newfound control. But for now, this is a promising improvement for a high-octane right-handed arm trying to stand out in a system loaded with such talent.

"It's a slow process," Luckert said. "Every week, we're seeing a little bit more from him, but the last three weeks are when we've really seen him get into his delivery. You're seeing what's possible when that happens."

Below is the complete list of Minor League Pitchers of the Week for June 10-16: