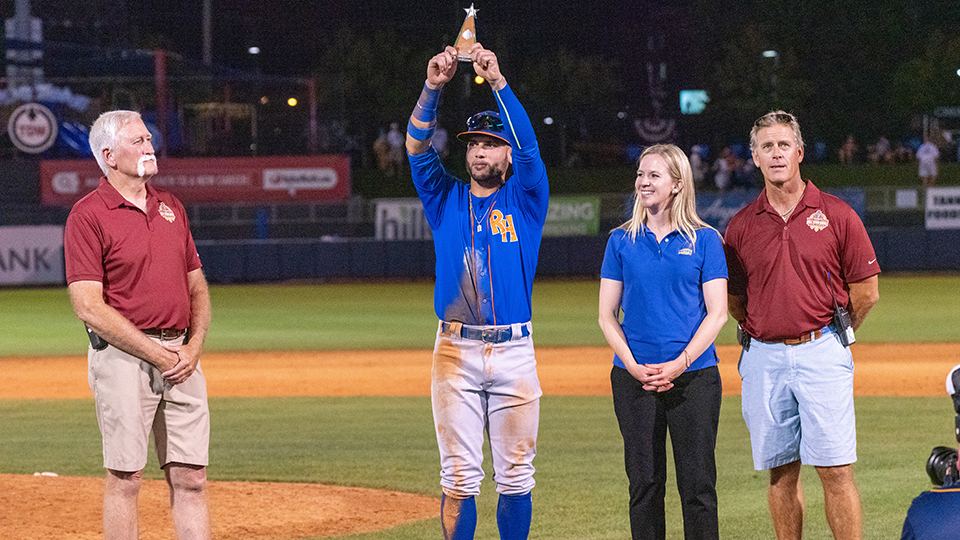 Luis Barrera ranks in the top four in the Texas League in batting, slugging percentage and OPS. (Rich Crimi/Tulsa Drillers)

TULSA, Oklahoma -- The Midland RockHounds just missed winning a first-half division title, finishing just a half-game behind Amarillo. But Luis Barrera and Collin Theroux made the team's presence felt at the 78th Texas League All-Star Game by leading the South Division to a 5-1 victory over the North Division at ONEOK Field.

Barrera went 3-for-5 and scored twice out of the leadoff spot to earn BUSH's Beans MVP honors. He led off the top of the ninth inning with a triple into the left field corner, then scored the game's final run on Michael De Leon's single to right.

"I am very grateful to be here, invited to the All-Star Game and am very happy about the game I had and ... very excited because I helped the team to win," Barrera said through Amarillo hitting coach Raul Padron, who served as interpreter. "I did it for my daughter and for my family. I am very proud of himself."

Theroux entered as a defensive replacement behind the plate in the bottom of the sixth, then drilled a two-run homer with two outs in the seventh to extend the South's lead to 4-0. Astros No. 20 prospect Abraham Toro was on first base after reaching on a fielder's choice.

"It was awesome. Start to finish, it was a blast," said Theroux, who played nearby at Oklahoma State and has seven homers this season. "Obviously, I came in in the middle of the game. I was just looking to have fun and enjoy the moment and, luckily, I got something to handle and it went out."

South Division manager Phillip Wellman of the Sod Poodles was happy to have Barrera and Theroux in his own dugout for a change.

"The guy can run, he can play defense, he can hit," Wellman said of Barrera, the A's No. 13 prospect who's second in the league in batting at .323. "We've seen it up close and personal all year long. He's got a lot of tools and a lot of ability, and he brought them tonight and showcased them.

"[Theroux's homer] kind of gave us a little breathing room. It seems like every time I see him in person, he hits a home run because he's hit about three of them against us, including one of the longest grand slams I've ever seen. It's nice to have guys like him on your club once a year."

The North finally got on the board in the eighth on an RBI ground-rule double by Mariners No. 5 prospect Evan White. With Arkansas teammate and 28th-ranked Donnie Walton on first base, White hit a shot on the foul line that was snagged by a fan leaning over the railing in left field.

Aside from that, the South delivered a dominant pitching performance, limiting the North to six hits. Astros No. 7 prospect Bryan Abreu of Corpus Christi got the win after striking out one in a 1-2-3 third.

The South grabbed a 2-0 lead by scoring in some unconventional ways. Toro drew a leadoff walk in the fourth and raced home on a two-out wild pitch by Northwest Arkansas' Conner Greene.

Greene was tagged with the loss after yielding one run on one hit and two walks in his lone inning.

The South tacked on a run in the fifth on another strange play. Barrera led off with a line drive single to left and Amarillo's Ivan Castillo followed with a base hit, putting runners at first and second with nobody out. Padres No. 23 prospect Owen Miller hit a hit fly ball to center and Barrera beat the throw to third from Cardinals No. 2 prospect Dylan Carlson. Tulsa third baseman Cristian Santana threw to second to try to get Castillo, but the ball hit him on the shoulder and bounced away as Barrera sped home to make it 2-0.

For the home Tulsa crowd of 7,449, much of the excitement came during the pregame Home Run Derby, which was won by the Drillers' Chris Parmelee. The Major League veteran hit eight homers in the main round, second to teammate Cody Thomas, but after Thomas connected for four long balls in the final round, Parmelee slugged five to win.

During the game, the Drillers' All-Stars were hitless until Zach McKinstry led off the bottom of the ninth with a single. Thomas came up with a spectacular diving catch in right-center field to rob Castillo of an extra-base hit in the third.

John Tranchina is a contributor to MiLB.com. This story was not subject to the approval of the National Association of Professional Baseball Leagues or its clubs.