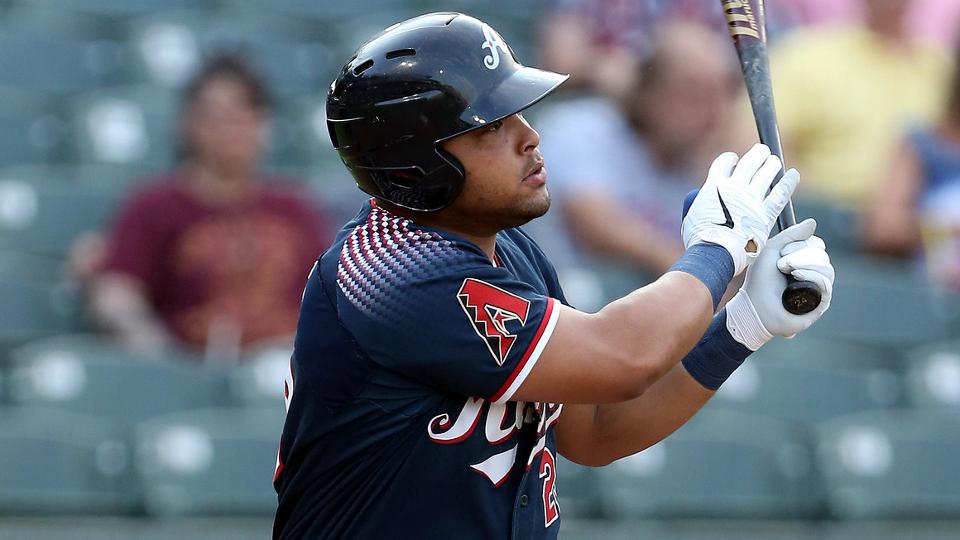 Yasmany Tomas entered the season with 10 multi-homer games in his professional career -- eight in the Majors and two in the Minors. All of those performances were of the two-homer variety. The Arizona outfielder changed that in a big way Monday.

Tomas went 5-for-6 with four home runs in Triple-A Reno's 25-8 win over Tacoma at Greater Nevada Field. The 28-year-old set a career high with eight RBIs -- his previous high of six came August 17, 2017 for the D-backs against the Mets, a season in which he belted 31 homers and drove in 83 runs.

The Cuba native wasn't the only Aces batter to put up a landmark performance in the high-scoring victory. Left fielder Matt Szczur hit for the cycle and Minor League home-run leader Kevin Cron, who has seven long balls in the past six games, went deep twice.

"All I know is this was fun, and everything clicked," Aces hitting coach Jason Camilli said. "When it happens like this, it's fun to watch."

Tomas started the fireworks on the first pitch he saw from Rainiers southpaw Anthony Misiewicz in the first inning, hitting a three-run blast to right field. Szczur got his homer out of the way in the following frame with a shot to left-center before Tomas led off the third with another first-pitch homer to right. The right-handed hitter did the same on the first pitch he saw in the fifth, this time taking righty Christian Bergman over the center-field fence.

"He was looking to be aggressive early on a pitch he could do damage to, and he was fortunate enough that each home run was on a first-pitch fastball," Camilli said. "He didn't waste any time and was ready to go. I love his aggressiveness. It's just ... let's be aggressive on pitches you can [do that to]. When he's on time, he can leave [the yard] every at-bat."

Cron lined a double to left and scored on Tomas' long ball in the fifth and belted his first homer of the game in the sixth -- a three-run shot to center with two outs off righty Tyler Danish.

"There's always something you can continue to get better at it, and the thing with Kevin is just maintaining his consistency and sticking to his strengths," Camilli said. "Not trying to do anything more, and that's the name of the game and why guys are in the big leagues for so long and what separates the guys who can't stick. It's been a blast watching him so far the first six-and-a-half weeks of the season."

Szczur came to bat in the seventh against Christian Pedrol needing a triple for the cycle, and like Tomas, jumped on the first pitch of the at-bat and went the other way for a triple to right, finishing the cycle four days after being activated from the seven-day injured list for an oblique injury.

"The last three games, he's locked back in," Camilli said. "I didn't say a thing [before his final at-bat], just wanted him to go out there and have a good at-bat. Of course, I'm praying he hits it in the perfect spot where he can use his wheels. The chances of that happening are slim to none, and he did it. To his credit, he got a pitch he could work with and he put it in the exact spot he could easily leg out for a triple."

But the fireworks still weren't over. Cron ripped his 21st home run over the left-field wall in the eighth off Pedrol to pick up his fifth and sixth RBIs of the game. Not to be outdone, Tomas homered on the righty's very next pitch to become the only Aces batter to hit four home runs in a game and the first Pacific Coast League hitter to accomplish the feat since Iowa's Micah Hoffpauir in on Aug. 9, 2008. The 28-year-old slugger finished with 17 total bases -- five shy of the league record set by Vernon's Pete Schneider (with five homers and a double) against Salt Lake City on May 11, 1923.

"He took [his demotion] in stride last year and he came here, he was great for the team and great in the clubhouse ... and just a guy that loves to play the game," Camilli said. "He understands what he needs to work on, goes about his business the right way and works at what he needs to improve on. He could've easily come here and been a different guy, but he's not, and that shows the character of who he really is."

Reno pounded out 25 hits total in the contest and hit nearly as many home runs (10) as Tacoma had hits (14). Arizona's 24 prospect Domingo Leyba, Caleb Joseph and Tim Locastro all went deep, and Leyba and Locastro finished with three hits.

Recently sent down Shed Long, Seattle's 12th-ranked prospect, went 3-for-5 with a double and three runs scored to lead the Rainiers.