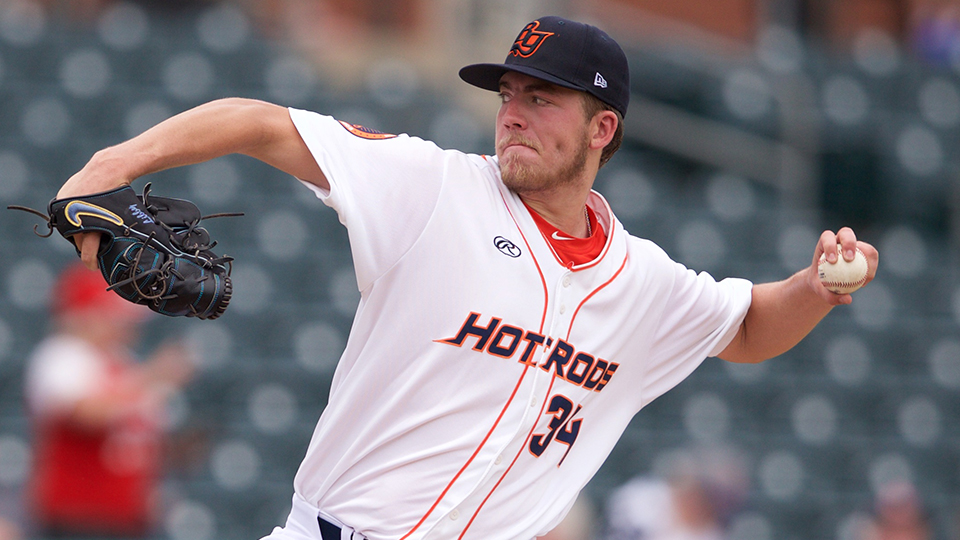 Matthew Liberatore held foes to a .237 average in 78 1/3 innings for Bowling Green in 2019. (Chris Robertson/KZONE images)

It may be the middle of winter, but the hot stove has reignited.

In the first major trade of the calendar year, the Cardinals acquired 2018 first-rounder Matthew Liberatore from the Rays. Catching prospect Edgardo Rodriguez and a Competitive Balance Round B selection (66th overall) also will head to St. Louis, which sends outfielders Randy Arozarena, Jose Martinez and a Competitive Balance Round A pick (38th overall) to Tampa Bay. Liberatore became the third-ranked Cardinals prospect.

After being picked 16th overall in the Draft, Liberatore made quick work of the Rookie-level Gulf Coast League. MLB.com's No. 41 overall prospect allowed three earned runs in 27 2/3 innings (0.98 ERA) before moving to Rookie Advanced Princeton, where he got the "W" in his only start.

In his first full season, Liberatore utilized a four-pitch mix highlighted by a plus-curveball. The southpaw, who turned 20 in November, went 6-2 with a 3.10 ERA, 76 strikeouts and 31 walks in 78 1/3 innings for Class A Bowling Green.

Liberatore will slide in as the Cardinals' top pitching prospect, leap-frogging 2019 first-rounder Zack Thompson -- who reached the Class A Advanced Palm Beach bullpen in July -- and Junior Fernandez and Genesis Cabrera, who made it to St. Louis in 2019. On a personal level, Liberatore will be reunited with third baseman Nolan Gorman, St. Louis' No. 2 prospect. The pair have remained close friends since growing up in the Phoenix area together.

"We believe he is on the cusp of establishing himself as a very good Major League player with meaningful upside," Rays GM Erik Neander told MLB.com.

Kelsie Heneghan is a reporter for MiLB.com. Follow her on Twitter @Kelsie_Heneghan. Joe Bloss is a contributor to MiLB.com. This story was not subject to the approval of the National Association of Professional Baseball Leagues or its clubs.