Martinez hops on a cycle for Surprise 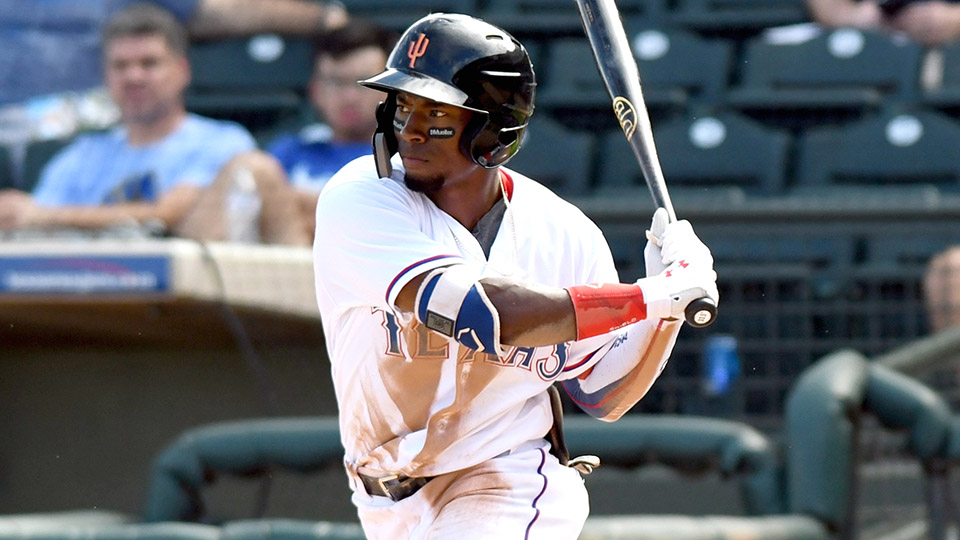 Julio Pablo Martinez did enough during his stateside debut with Class A Short Season Spokane this past season to warrant top prospect status. He gave another glimpse into that developing talent Monday afternoon in the Arizona Fall League.

Texas' No. 2 prospect hit a ninth-inning double to complete the cycle and drove in two runs during Surprise's 8-5 loss to Salt River at Surprise Stadium. Martinez scored twice, walked and reached safely in all five plate appearances. He's hit safely in seven of his eight AFL outings.

The 22-year-old tripled to right field and scored on fifth-ranked Pirates prospect Cole Tucker's sacrifice fly in the opening frame. He homered to right in the third, beat out an infield single to second base in the fifth and walked in the seventh. Due up fourth in the bottom of the ninth with the Saguaros trailing by four runs, Martinez capped his big day with an RBI double to right.

"He's been very good and is a hard worker," Surprise hitting coach Brian Buchanan said. "He has all the tools you look for in a player offensively. He's fast, athletic, can bunt for hits and has a quick swing that gets the barrel of the bat through the zone on time. He's been great here for us."

The Baracoa, Cuba native was sent to the Northwest League where he compiled a .252/.351/.436 slash line with 22 extra-base hits, 21 RBIs and 11 stolen bases in 60 games for the Indians. Martinez batted .317 over his final 46 games after hitting .188 in his first 14 contests with Spokane. He carried that over into the postseason, compiling a .348 average with two homers and five runs scored in six playoff games.

"Offensively, he's got some real talent," Buchanan said. "He's not chasing and he's hitting some good fastballs against some decent arms. and making the adjustments. [The cycle] is something you don't see very often, but he put together great at-bats all night. It's a good thing that ball he hit in the ninth bounced off the wall or else he probably would have had another triple. He smoked that thing."

Vladimir Guerrero Jr. singled in four at-bats for Surprise. Baseball's top prospect is batting .485 and has hit safely in all eight AFL contests.

Luis Reyes (1-1), the No. 23 Nationals prospect, allowed three runs on seven hits and a walk and a strikeout in 4 2/3 innings to notch the win.

Second-ranked Yankees prospect Estevan Florial tripled, singled and collected an RBI for Glendale. Orioles No. 12 prospect Ryan McKenna drove in two runs and Indians No. 6 Yu Chang added a two-run homer and a single. The Dodgers' Ben Holmes (1-1) allowed one run on three hits and a walk with six strikeouts in four innings. Sixth-ranked Braves prospect Cristian Pache had two hits and an RBI while Mariners No. 20 prospect Ian Miller hit a solo homer for Peoria. Gameday box score