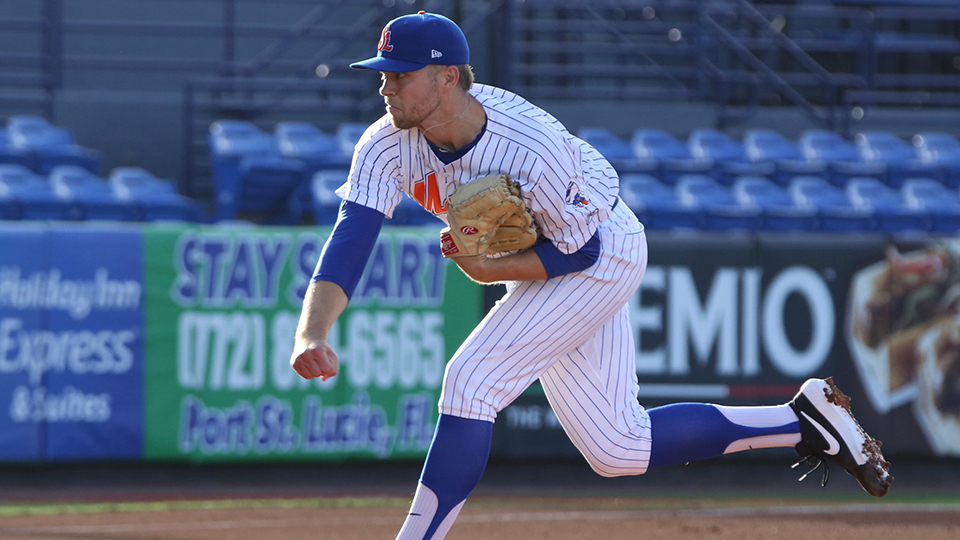 Tommy Wilson stands fifth in the Florida State League with a 2.01 ERA through eight starts this season. (St. Lucie Mets)

Early in his Florida State League tenure, Tommy Wilson admittedly strayed from being a control pitcher and started to think about ramping up his velocity. But after a few up-and-down outings, he realized he needed to stick with what he does best. Keeping with that mentality deep into May, he's become one of the circuit's best arms.

The Mets right-hander allowed a hit and a walk over a career-high seven innings to lead Class A Advanced St. Lucie to a 3-0 blanking of Dunedin on Tuesday at First Data Field. Wilson (4-2), who carried a no-hit bid into the seventh, lowered his ERA to a season-best 2.01.

He didn't pitch against Dunedin last year, but he took plenty of mental notes during St. Lucie's four games against the Blue Jays. From those observations, Wilson figured mixing speeds and changing directions along the horizontal plane would be the ideal plan of attack. It worked nearly flawlessly.

"I think moving around my fastball and then working my changeup off that, based on their lineup I kinda saw that going inside with my fastball early and going changeup away early in the count worked, so I stuck with it pretty much the whole game." he said. "It's something I saw last time we played them, when I got to watch three games. And then charting last night and saw that our starter seemed to work well. So I knew going into today that that was going to be my strategy, and it worked out pretty well."

Although he allowed eight runs -- seven earned -- in his first three FSL starts, Wilson (4-2) has given up three earned runs over his last five. He's delivered three scoreless outings of at least six innings, including a seven-inning start on May 1 against Palm Beach in which he did not allow a hit. In May, Wilson has allowed one earned run over 25 innings.

Now fifth in the league in ERA and ninth with a 1.05 WHIP, Wilson said the early mental adjustments were a turning point.

"I think it was the hump that I had to get over. After my first few starts, I was thinking that velocity was everything and I need to blow it by guys," he said. "Ever since my third or fourth start, I reminded myself that hitting spots is more valuable to me. So kind of every time I go out and warm up before a game I just remind myself, in the back of my mind I'm like, 'Hey, velocity isn't everything and I can get outs any way with the plan I have.'"

The Cal State Fullerton product faced one batter over the minimum, throwing 63 of 87 pitches for strikes, in his second seven-inning start this season.

Wilson set down the first four batters before No. 22 Blue Jays prospect Ryan Noda drew a one-out walk in the second. He didn't last long at first, however, as Kacy Clemens flied to center fielder Quinn Brodey, who fired to first to double off Noda and end the inning.

The double play started a string of 15 consecutive batters set down before Cullen Large lined a first-pitch single to left with one out in the seventh to break up the no-hit bid. Mentally preparing to pitch out of the stretch again, Wilson induced a flyout from 24th-ranked Alejandro Kirk to end the frame and close the book on another scoreless effort.

Getting through seven with nearly another hitless outing gave Wilson a sense of deja vu. Although he came up one out short this time, there was no disappointment in another scoreless outing.

"It definitely felt similar [to the hitless start]," Wilson said. "I felt very comfortable with my fastball command and everything was working, thankfully. It felt good and I had the no-hitter in the back of my mind. Unfortunately, gave up that hit in the seventh, but it's all good. Super-happy with the outing and hope to have that same feeling on the mound next time."

Taken in the 19th round of last year's Draft, Wilson sports a 1.76 ERA and 63 strikeouts across 66 2/3 innings as a Minor Leaguer. Just once in 19 career appearances has he allowed more than three runs -- he was charged with four against Bradenton in his 2019 debut on April 5. Although he didn't make any starts in the New York-Penn League, Wilson has eight this season and said he's adjusted to going deeper into outings like he did in college.

There have been plenty of accomplishments this year, but near the top of the list is having his dad -- actor Tom Wilson -- get to see Wilson pitch for the first time professionally. The older Wilson, who portrayed Biff Tannen in the "Back to the Future" movie trilogy, took in his son's last outing against Florida on Thursday, which was a true highlight.

"He was actually there at my last start in Kissimmee," the California native said. "So that was really fun that he got to see me pitch for the first time professionally. So that was cool. Yeah, it was a great time, I got to see him and hang out with him. It was refreshing, for sure, and it was a blessing to have him see me pitch."

Andrew Mitchell gave up a hit and struck out three over the final two frames to earn his first save and preserve St. Lucie's sixth shutout of the season.

Jacob Zanon connected on his second homer of the season, while Matt Winaker delivered an RBI double to account for the Mets' offense.