Checking in on prospects who joined Rays, O's, other systems 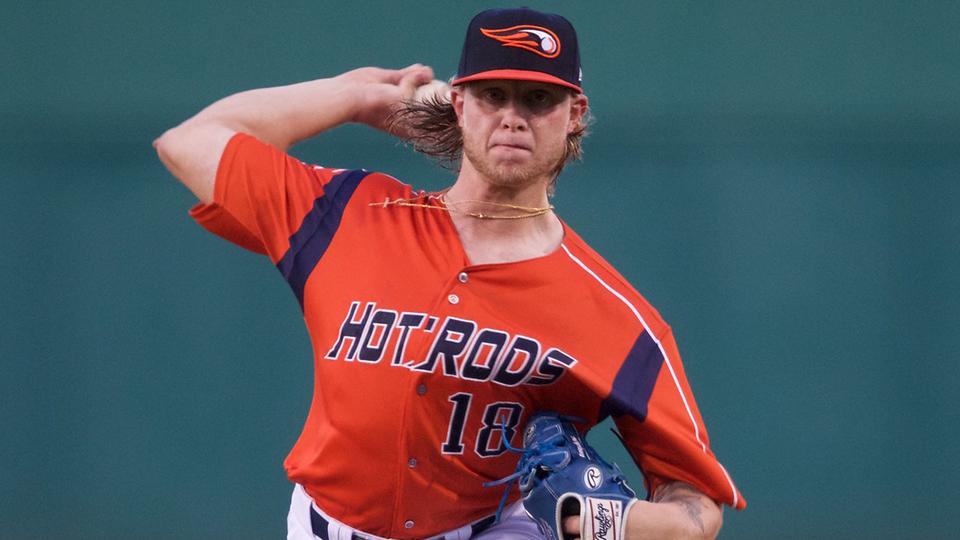 Shane Baz has struck out 27.2 percent of the batters he has faced for Class A Bowling Green this season. (Chris Robertson/MiLB.com)

It's one of the main tenets of the Minor Leagues: everything is about the long run.

So while lots of exciting trades went down before last year's deadline to satisfy Major League clubs' immediate needs, it takes time to evaluate the prospect sides of those deals. It's still early, but one year later -- even after some of the Major League pieces have moved on -- we can get a sense of the progress of the Minor Leaguers involved.

Chris Archer (to Pirates) for Austin Meadows, Tyler Glasnow, Shane Baz (to Rays): It may be tough to remember now because of the way things have gone for the Pirates and Archer (5.36 ERA in 17 starts), but this was the blockbuster of the deadline period due to Archer's talent and the years of control involved. (Compare it to the next trade below, which involved a rental player.) The Rays were able to turn 3 1/2 years of control of Archer (including two affordable team options) into two former top Bucs prospects in Meadows and Glasnow. Meadows has become an All-Star outfielder in Tampa Bay after his stock had slipped in Pittsburgh, and Glasnow (1.86 ERA, 55 strikeouts in 48 1/3 innings) might have joined him in Cleveland had he not suffered a forearm strain. If just those two were involved, this wouldn't look great for Pittsburgh. But it looks even rougher considering Tampa Bay later added Baz as a player-to-be-named-later in August. After some bumps earlier in his career, the 2017 12th overall pick is back as a Top-100 prospect at No. 92 who possesses four above-average pitches and better control. The 20-year-old right-hander can get lost in the shuffle of a loaded Rays system, but he's an important prospect for an organization that needs to build its winners from within.

Manny Machado (to Dodgers) for Yusniel Diaz, Dean Kremer, Rylan Bannon, Zach Pop, Breyvic Valera (to Orioles): Archer's deal may have been a bigger overall blockbuster, but Machado's move to Los Angeles was the flashiest of the deadline season. The Dodgers parted with five prospects to pry the four-time All-Star from the only organization he'd ever known, and it almost helped bring a World Series title to LA. Machado ably filled in for the injured Corey Seager at shortstop only to see the Dodgers fall to the Red Sox in the World Series. He entered free agency and signed a 10-year, $300 million deal with the Padres in the offseason. Of the five players the rebuilding O's received for the former face of their franchise, four remain ranked among the organization's top 30 -- Diaz (No. 4), Kremer (No. 9), Pop (No. 19) and Bannon (No. 21). That said, Diaz was the only Top-100 prospect of the group, and his stock has slipped as he struggles in his third season at Double-A. Kremer hasn't quite lived up to the promise of his 178-strikeout season last year, but he has been serviceable at Bowie, with a four-pitch mix that should make him a starting option in Baltimore as soon as next summer. The shine has come off Bannon's bat in his return to Double-A, but he could still become a utility infield option. Pop was showing promise with a plus fastball and slider as a Bowie reliever, but he will miss the rest of the season after undergoing Tommy John surgery in May. Valera was traded to the Giants in the offseason and is now with the Yankees. Though none of the five have become a system headliner, the Orioles added much-needed depth and talent to a system undergoing a major overhaul.

Brad Hand, Adam Cimber (to Indians) for Francisco Mejia (to Padres): The Indians needed bullpen help and were willing to trade their most valuable Minor League asset for two good relievers, including their closer in Hand. The Padres hoped that Mejia, who entered this season as MLB.com's No. 26 overall prospect, would finally be able to carve out a Major League catching role in San Diego, but that has not yet come to pass. The 23-year-old switch-hitter remains stuck behind strong defender Austin Hedges on the Padres depth chart, in part because he's hitting just .200/.258/.336 in the Majors this season. Mejia is still young and has shown flashes of his offensive potential during spells at Triple-A El Paso, but he's in danger of losing his place in the Padres' long-term plans.

Video: Mercado leads off with blast for Clippers

Oscar Mercado (to Indians) for Conner Capel, Jhon Torres (to Cardinals): This deal may have been overlooked at the time, but it's grown in importance over the last 12 months. The Indians were looking to bolster their outfield corps and thought they'd found a solution in Mercado, who was St. Louis's No. 10 prospect at the time but had yet to make his Major League debut. This is why patience is important with prospects. Mercado never got the call to Cleveland in 2018 but came flying out of the gate with Triple-A Columbus this season and made his Major League debut on May 14. Since then, he has been a mainstay in Cleveland, hitting .281/.337/.458 and ranking sixth among rookie outfielders with a 0.9 fWAR. His ability to play all three outfield spots has provided Cleveland with the coverage it needed, even if later than originally expected. On the Cardinals side, Capel has been on the IL since July 5 and was hitting just .213 with a .645 OPS while Torres is successfully rebuilding his stock at Rookie Advanced Johnson City (.903 OPS in 17 games) after a rough start at Class A Peoria.

Kevin Gausman, Darren O'Day (to Braves) for JC Encarnacion, Brett Cumberland, Evan Phillips, Bruce Zimmermann (to Orioles): There was a time when it wasn't hard to envision the Orioles building around Machado, Gausman, Dylan Bundy, Chris Davis and Jonathan Schoop. Instead, 2018 was a season to truly cut bait. The O's once again went for depth moves by bringing in four players for Gausman and reliever O'Day, who hasn't pitched this season due to forearm tightness. Sluggers Encarnacion and Cumberland were the bigger names at the time of the deal, but both have struggled in 2019. They've likely been passed by Zimmermann, who has a 2.77 ERA with 97 strikeouts in 94 1/3 innings at Double-A. The 24-year-old left-hander has a deep arsenal and could work his way into the Orioles' rotation discussion.

Cameron Maybin (to Mariners) for Bryson Brigman (to Marlins)