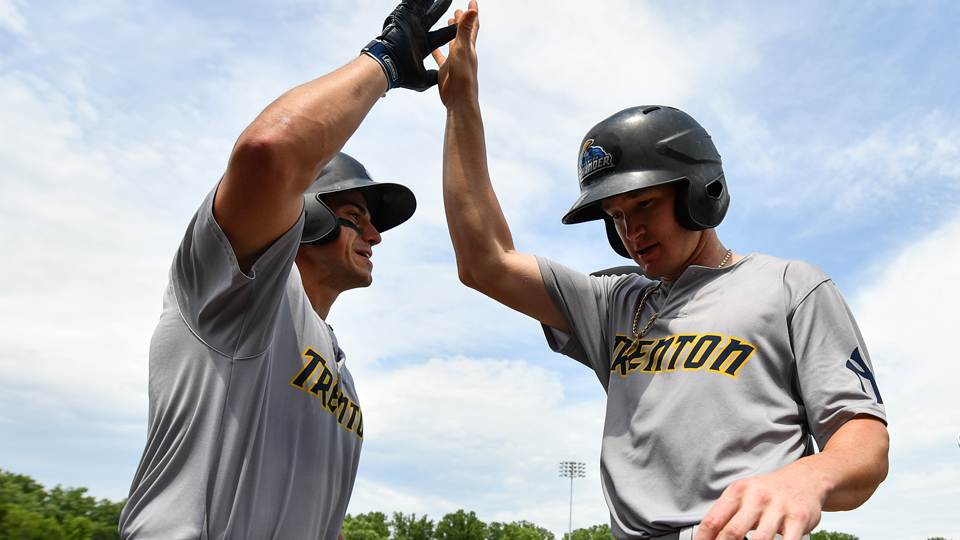 Ten pitches into the bottom of the seventh inning at Peoples Natural Gas Field on Monday night, the lead the Double-A Thunder had built in the top half of the frame was in jeopardy.

But Yankees prospects Kellin Deglan and Kyle Holder turned a triple play to erase a two-on, nobody-out situation and preserve the lead in a 4-3 win over Altoona.

"We were all kind of like, "What just happened?'" shortstop Holder said. "But it got us three outs and we were cool with it."

The Thunder were in the jam after Andrew Bellatti issued five-pitch walks to Gift Ngoepe and Mitchell Tolman to begin the inning. With Chris Sharpe up in a bunt situation, Holder positioned himself up the middle. He wanted to minimize Ngoepe's lead off second, but also be there in case a bunt rolled hard at the right-hander for a possible double play.

But the ball popped off Sharpe's bat and catcher Deglan scurried underneath it to make the catch for the first out. He tossed to Holder, who stood at second and touched the bag as Ngoepe, more than halfway to third, stopped in his tracks. Tolman hadn't paused either en route to second, so Holder had a choice. He could throw back to first or tag Tolman himself. He chose the latter, and in a matter of seconds, the feat was complete.

"As soon as the ball went up, instantly I thought, 'OK, these guys need to get back,'" Holder said. "And they just kept running, trying to advance. I was like, 'Do they not see the ball?' It was slo-mo in your head, but it happened so quick."

After the game, Holder still wondered why the runners didn't attempt to retreat. Maybe, he thought, they never saw the ball. Maybe they misread a sign. Maybe they felt like they were too far and their best bet was Deglan dropping the ball.

"It was one of the weirder plays I've ever been involved with," Holder said.

Bellatti (1-0) picked up the win after he tossed a scoreless sixth with two strikeouts. Mandy Alvarez put the Thunder ahead with a two-RBI double in the seventh.

Brady Lail earned a two-inning save, his first. The right-hander allowed one hit and struck out four.