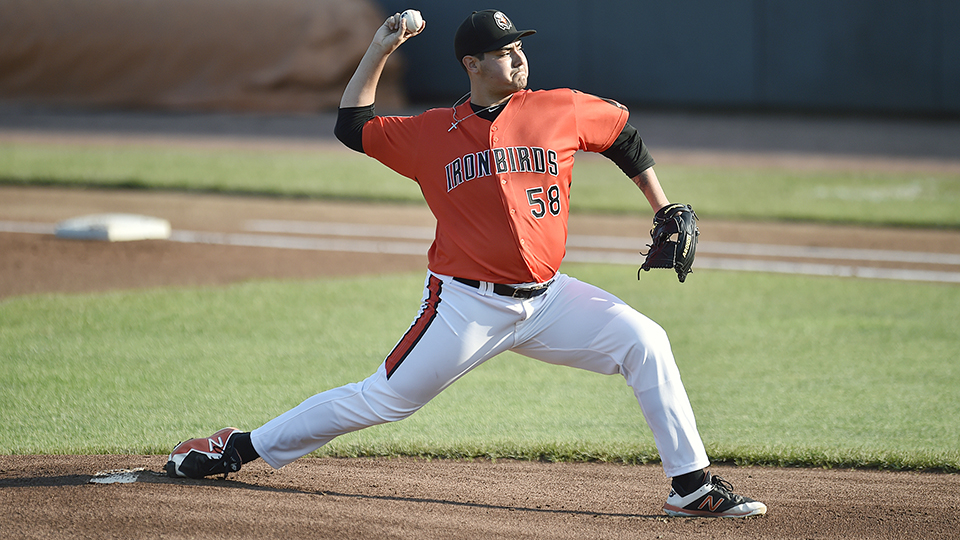 Class A Short Season Aberdeen hadn't hurled a no-hitter since coming into existence in 2002. And not even before that when the IronBirds were known as the Utica Blue Sox or the Utica Blue Jays, dating back to 1977. Jake Lyons, James Ryan and Kyle Martin changed all that Monday night.

The Baltimore prospects combined to strike out eight and walk one -- all throwing to this year's No. 1 overall pick Adley Rutschman -- as Aberdeen romped past Vermont, 7-0, at Centennial Field.

Lyons (1-3) retired the first six batters before walking Marty Bechina to start the third inning. That was the only blemish for the 20-year-old right-hander. Lyons retired the next nine batters in a row in the longest outing of his professional career.

The 2019 22nd-round pick out of Oklahoma State threw 41 of his 61 pitches for strikes and fanned five.

"It felt good to get that first win out of the way," Lyons said. "It took a little getting used to on the mound, but they have a beautiful park there. Everything was going right. We cruised from the start to the end."

Monday's feat was the fourth New York-Penn League no-hitter thrown at Centennial Field all-time, the third against the Lake Monsters.

"He hit his spots," Aberdeen manager Kevin Bradshaw said of Lyons. "He could throw this breaking ball for strikes any time he wanted. He kept his fastball down too, that was the key. He was outstanding. Him and Adley were right on cue together."

The skipper praised Baltimore's top prospect for the way he handled the trio behind the plate.

"He did an excellent job," he said. "He's quiet back there as far as receiving. I think he got some calls that way on some borderline pitches. He did a great job reading swings. He knew what the pitchers had working for them and kept going to it."

Lyons also had high praise for his batterymate.

"Behind the plate, he's spectacular," the right-hander said of MLB.com's No. 6 overall prospect. "It wasn't too hard linking up with him. He knew what was working best for me and what I wasn't. We talked throughout the game, along with our pitching coach (Robbie Aviles). His framing is really good. I was really happy to have him behind there."

Ryan, who signed with Baltimore as a Minor League free agent on June 22, entered in the sixth. With two outs in the inning, seventh-ranked A's prospect Logan Davidson reached on a fielding error by second baseman Jean Carmona. The 22-year-old righty got out of the inning by inducing Josh Watson to line out to first base.

Ryan tossed nine pitches in the seventh and the ball never left the infield. The St. Katherine College product got through the eighth on 10 pitches.

"We had it mapped out who was pitching. It just happened to fall in line," Bradshaw said. "We knew Ryan was going at least two innings. He was hitting the spots with the slider. He had a low pitch count, so we decided to run him back out there for a third."

Bradshaw admitted he thought about sending Ryan out to close the contest, but his hurler felt his bicep getting a little stiff, so he tabbed Kyle Martin to close out the feat in the ninth.

"When the phone started ringing, I got that butterfly feeling in my stomach," Martin said. "I was ready to go. It was awesome. I knew what was going on, but I didn't talk about it. No one in the bullpen talked about it. We all knew."

The 21-year-old right-hander struck out Yerdel Vargas, Davidson and Watson to complete the milestone. After a 2-2 slider was called a ball, Martin didn't heed his catcher's wishes for the last pitch of the game.

"I knew the kid was sitting on fastballs, so I flipped in a slider," he said. "Adley wanted me to throw a changeup. I didn't because it's my third-best pitch. I shook it off and threw another slider and the rest is history."

After the on-field high-fives and hugs concluded, Aberdeen continued the celebration in the locker room with some pizza.

"It was like being a little kid at a sleepover and having a pizza party," Lyons said.

Orioles No. 11 prospect Kyle Stowers belted a towering solo shot in the ninth and drove in two runs for the IronBirds.