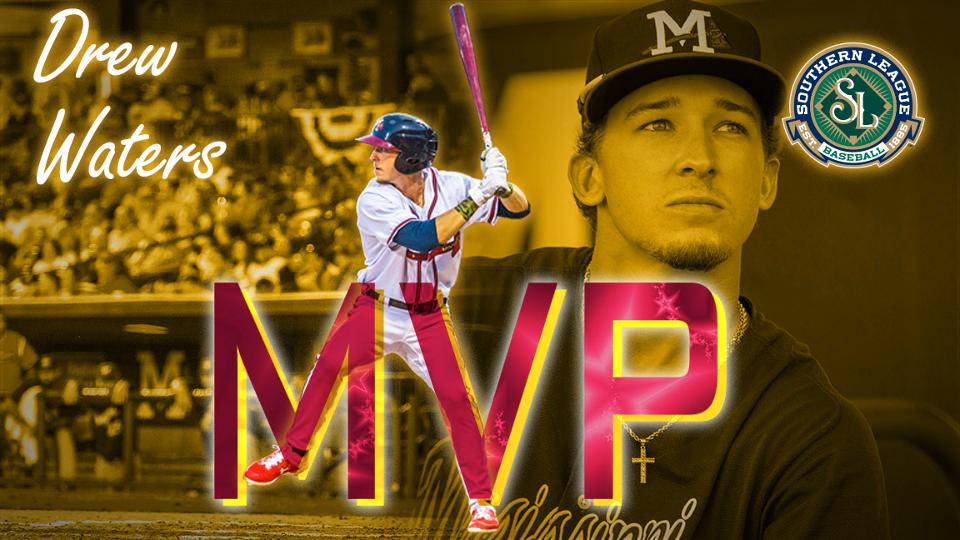 PEARL, MS - The Southern League announced today that Drew Waters  has been named Southern League Most Valuable Player for his performance with the Mississippi Braves this season.

At 20 years old, Waters becomes the youngest player to win the award since Delmon Young won league MVP in 2005 for the Montgomery Biscuits at age 19. Waters is the first Mississippi Brave to win the award, and first for the franchise, since Ryan Klesko and Javy Lopez won in back-to-back seasons in 1991-92. "First and foremost, I am humbled to have received this award," said Waters. "The Southern League has such a great history of incredible players and to now be amongst those that have won the MVP is a tremendous honor. Second, to be the first Mississippi Brave to do it is something I cannot describe. Wearing the same uniform as Brian McCann, Jeff Francoeur, Jason Heyward, and Freddie Freeman - guys I grew up watching as an Atlanta kid - and now knowing that I am the first M-Brave to win MVP is surreal to me. I hope this is a stepping stone to joining all of those guys in their paths to Atlanta. I will work harder than ever to make that happen."   Waters became the first player in the Southern League and Double-A baseball to the 100-hit mark on June 30 and the first player in all of professional baseball to 120 hits on July 13 in just his 89th game. The Woodstock, GA native was promoted to Triple-A Gwinnett on Aug. 5, but over 108 Southern League games, still leads the league in batting average (.319), hits (134), doubles (35), triples (9) and extra-base hits (49). Waters ranks second in OPS (.847) and total bases (202), third in slugging (.481) and fifth in runs scored (63).   Waters' .319 batting average for the M-Braves this season sets a new club record, surpassing Ozzie Albies' .315 season in 2016.   Over 128 games this season between Mississippi and Gwinnett, Waters ranks fourth in Minor League Baseball in hits with 159 and second in doubles with 40 this season. Through Aug. 27, Waters is batting .317 for the season with 40 doubles, nine triples, six home runs, 51 RBI, 14 stolen bases, .367 on-base percentage, and .836 OPS.   The midseason Southern League All-Star posted an18-game hit streak and league-best 30-game on-base streak, May 23-June 26, which was the third-longest in M-Braves history. Waters recorded four four-hit games and 12 three-hit games this season and a league-best 39 multi-hit games. Waters was named a Postseason All-Star in the South Atlantic League while playing for the Rome Braves.

The Atlanta Braves selected Waters in the second round of the 2017 draft out of Etowah High School in Woodstock, Georgia. He is currently listed as Atlanta's No. 2 prospect and the no. 25 overall prospect in baseball by MLB Pipeline.