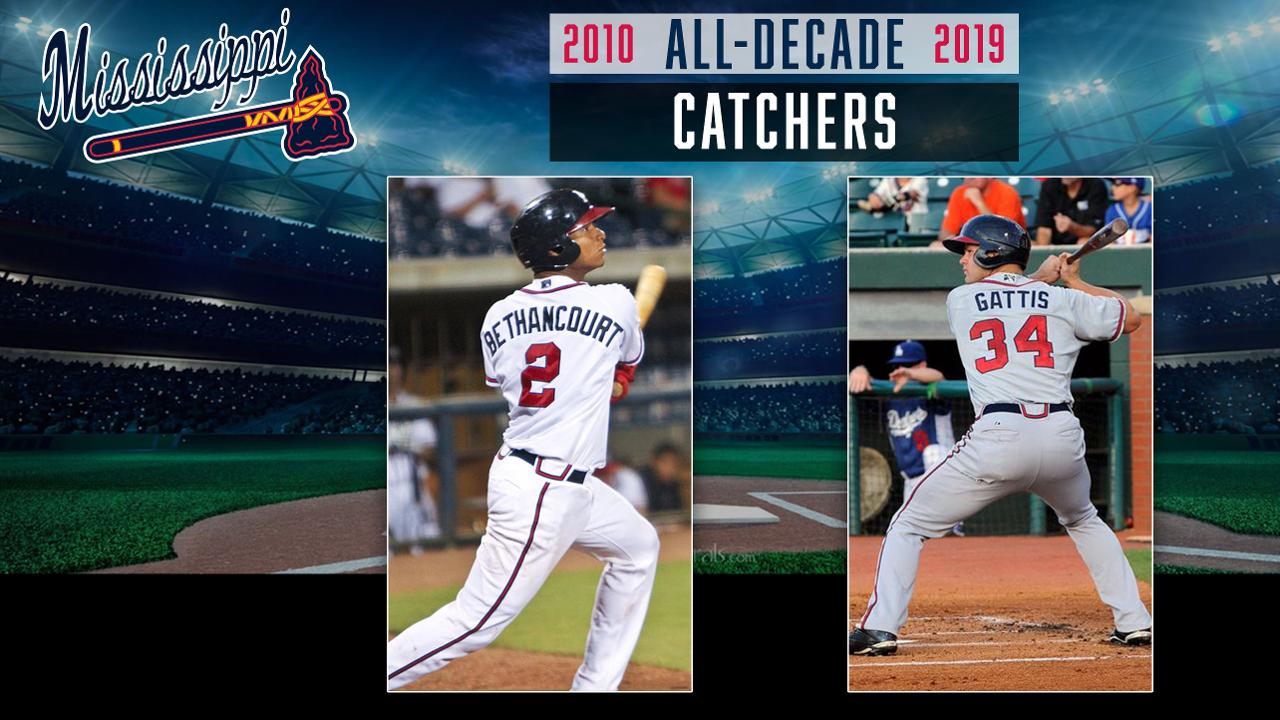 We move to the position players by naming two catchers.

Christian Bethancourt - Arguably the best catching prospect of the decade for the Braves, Bethancourt, a native of Panama, went to three straight Futures Games, two of which were in 2012 and 2013, while with the M-Braves. Bethancourt posted big numbers, despite his 2012 season being cut short after breaking his left hand after being hit by a pitch. Over 161 M-Braves games, Bethancourt hit .262 with 26 doubles, 14 home runs, and 77 RBI.

Ironically, Bethancourt played in 161 major league games from 2013 to 2017 for Atlanta and San Diego, batting .222 with 20 doubles, eight homers, and 46 RBI. In 2014, Bethancourt was promoted to the major leagues when fellow All-Decade catcher Evan Gattis went on the disabled list on June 28. He recorded his first major league RBI on July 1, against Daisuke Matsuzaka. Bethancourt hit .240 with the Braves in 13 games and was demoted to the minor leagues on July 21, when Gattis was activated from the disabled list. He was to be promoted back to the Braves on September 2. On December 10, 2015, Bethancourt was traded to the San Diego Padres for right-hander Casey Kelly and Ricardo Rodriguez.

Evan Gattis - The Texan and World Series champion began his 2012 season with a .385 batting average, nine home runs, and 29 RBI in High-A for the Braves and was promoted to Mississippi at the end of April. With Brian McCann starting for the Braves and top prospect Christian Bethancourt regarded as an excellent catcher, Gattis was shifted to left field. Gattis made 17 appearances behind the plate and 30 appearances in left field for the M-Braves. Gattis was the top power hitter in the league over his Double-A stretch, batting .258 with 13 doubles, four triples, nine home runs, 37 RBI, and .865 OPS in just 49 Southern League games. His numbers made him a Baseball America Double-A All-Star at the end of the season.

The Braves invited Gattis to spring training in 2013 as a non-roster player. With a 19-for-53 (.358) performance in the Grapefruit League and McCann starting the season on the disabled list, the Braves added Gattis to their Opening Day roster to share catching duties with Gerald Laird. On April 3, 2013, Gattis made his major league debut. He recorded his first hit as a major leaguer, a home run off of Roy Halladay, in his second at-bat. He batted .333 in his first eight games, also homering off of Stephen Strasburg. Gattis was named NL Rookie of the Month for April 2013, in which he batted .250 and led all major league rookies with six home runs, a .566 slugging percentage, 16 RBI, and 43 total bases. Gattis hit 43 home runs over his two seasons with the Braves before being traded to Houston in 2015, with James Hoyt for Mike Foltynewicz, Andrew Thurman, and Rio Ruiz. Battling injuries and another move to left field, Gattis still provided plenty of big moments for the Braves, including being the first catcher in club history to have 20+ homers in his first two seasons. Gattis went on to win a World Series for the Astros in 2017 and finish his career with 139 home runs, 116 doubles, 12 triples, and 410 RBI over 706 MLB games.